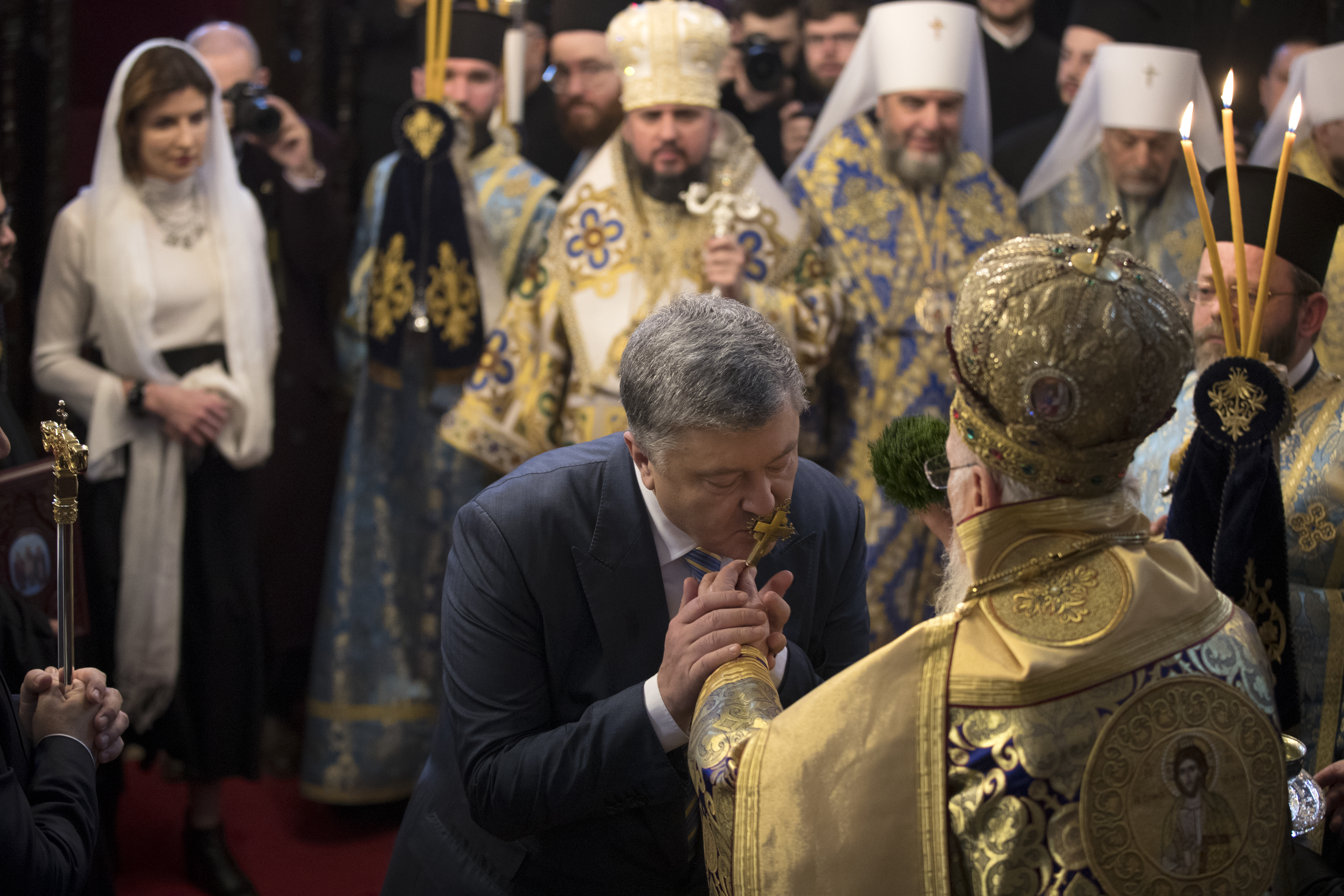 To save his sagging political fortune, the man responsible for the failed Ukrainian reforms, human rights violations and corruption dons a priestly robe.

The sins of corruption, anarchy and authoritarianism are now absolved. Ukrainian President Petro Poroshenko is busy putting on the unholy halo of a false saint. He claimed the status of a saint while interfering strongly in the creation of a new Ukrainian Orthodox Church totally independent from Russia.

They also elected Metropolitan Epiphanius as head of the new church. The Ecumenical Patriarchate of Constantinople, the highest authority in the Orthodox world, granted independence to the new church on January 6.

While the Ukrainian Church’s break with Russia, a semi-totalitarian state which is waging an aggressive irredentist war against Ukraine, is a positive development, the degree and context of Poroshenko’s involvement in this affair is of significance. many negative aspects.

Poroshenko (who had ironically been a supporter of the Moscow Patriarchate until recently) made Ukraine’s new Orthodox Church his own propaganda tool ahead of the March 31 presidential election.

The number of ubiquitous advertisements promoting Poroshenko’s role in the independence of the Ukrainian church on the internet and in the streets is mind-boggling. It seems that he is trying to drive his new status of “saint” down the throats of the Ukrainians.

As a budding Byzantine emperor, Poroshenko served on the presidium of the assembly that established the Ukrainian Orthodox Church on December 15.

Poroshenko also traveled to Istanbul with Metropolitan Epiphanes to receive the tomos – a document on the independence of Ecumenical Patriarch Bartholomew – January 5 and 6.

When Epiphanius was supposed to bring the tomos to St. Sophia’s Cathedral in Kiev on January 7, Poroshenko couldn’t miss the opportunity and desperately grabbed the piece of parchment, with the audience expected to witness the absurd spectacle of two people wearing the tomos in at the same time. He seemed to be about to tear him away from Epiphanes and put on a bishop’s miter.

Indeed, Poroshenko looked like Gollum from The Lord of the Rings, eyeing the tomos and almost saying “my precious”.

On January 10, Poroshenko began his “tomos tour”, traveling with the document across Ukraine and giving speeches in churches like a priest. He also enjoyed myriads of senseless eulogies and extravagant praise in the best traditions of those lavished on Soviet dictators.

In October Metropolitan Macarius, then head of the unrecognized Ukrainian Autocephalous Orthodox Church, urged Ukrainians to “bow down to Poroshenko”, while Metropolitan Epiphanes compared Poroshenko on January 7 to Prince Vladimir the Great, who Christianized Kyivan Rus in 988.

Poroshenko’s political tricks will reduce the legitimacy of the new church and slow down the transfer of parishes from the Moscow Patriarchate to the Ukrainian Orthodox Church. Believers will be less likely to turn to the political church of Poroshenko than to a neutral and apolitical arbiter.

Moreover, the aggressive and aggressive publicity of Poroshenko’s false piety may have the opposite effect to the intended effect for many: They realize that his church rhetoric has nothing to do with genuine faith.

In a way, his evolution as a quasi-bishop resembles that of a businessman. Alexander Petrovsky, known as Narik (junkie).

Narik, who was described by the Attorney General Yuri Lutsenko as mafia boss, stood alongside Poroshenko and Epiphanes in Dnipro in December and during the granting of the independence tomos on January 6. chief.

A copy of Russia

The Russian Orthodox Church is a political tool subservient to the Kremlin, and Poroshenko is turning the Ukrainian Church into its own public relations company.

Like Poroshenko, the eternal president of Russia, Vladimir Poutine, used a religious agenda to distract from his regime’s corruption and authoritarianism, economic hardship and rigged elections. This included hysteria over the case against members of punk band Pussy Riot who were jailed in 2012 for two years for singing in a church.

Poroshenko’s religious agenda is a fig leaf meant to compensate and replace much bigger problems: Poroshenko’s utter failure to reform Ukraine and his efforts to block and sabotage reforms; its decision to spearhead corruption rather than fight it, with Ukraine remaining one of the most corrupt countries in Europe; the extreme poverty of Ukrainian citizens, Ukraine being one of the poorest countries in Europe; the repression of the Poroshenko regime against human rights and freedoms and its growing authoritarian tendencies.

When an activist asked him on January 18 when he would start fighting corruption instead of staging his circus tricks with the tomos, Poroshenko called him an “unbeliever” and “Russian provocateur” and ‘urged to go to church and pray. Poroshenko’s use of sham piety to compensate for his government’s greed and corruption is so ludicrous that it calls for no comment.

The theater of the absurd reached its peak when a retiree was photographed kissing Poroshenko’s hand during his tomos tour on January 17. In his new imaginary world, he now sees himself as a medieval king blessing his servile subjects with divine grace.

Another peak of madness came on January 16, when Poroshenko claimed that the tomos was more important than victory in the war with Russia.

With this tirade, Poroshenko shot himself in the foot because he always used war with Russia as the most important thing of all time and a universal excuse for all his failures. But it also offended veterans of the war with Russia and those dedicated to fighting the aggressor.

Pseudo-religious babbling has now replaced everything else. Poroshenko apparently forgot his claim in November that Russia was about to launch a full-fledged invasion of Ukraine.

In November, Russia committed an act of overt aggression, illegally seizing three Ukrainian ships on the border between internationally recognized Ukrainian territorial waters and neutral waters and capturing 24 Ukrainian sailors. Poroshenko also seems to have forgotten the fate of sailors: he is busy putting on priestly garments.

Back to the Middle Ages

Religion is part of Poroshenko’s increasingly archaic and outdated agenda: it can be summed up in the triad “faith, language, army”. As developed countries advance in space technology, 3D printing, and genetic engineering, Poroshenko – like Putin – embraces an increasingly obscurantist, irrational and outdated ideology.

Poroshenko’s religious circus is further proof that, contrary to his claims, he alienates Ukraine from Europe, Enlightenment rationalism and European liberal values ​​of separation of church and state and freedom. of worship. Instead of modernizing and reforming the country, he is going back and trying to turn it into an isolated island of archaic bigotry.

If Poroshenko is re-elected, this irrational illiberalism will be set in stone and Ukraine will move further away from the aspirations of its people to be part of a secular and free Europe. Thus, the EuroMaidan revolution of 2013-2014, which ousted Yanukovych, the brutally authoritarian and pro-Russian archetype of a post-Soviet oligarch, in favor of European values, will ultimately be defeated.

Indeed, EU officials and taxpayers should pay more attention to Ukrainian politicians who walk rather than them talking.

This content is part of the ‘Freedom of Religion’ section supported by the Faith and Freedom Summit Coalition.