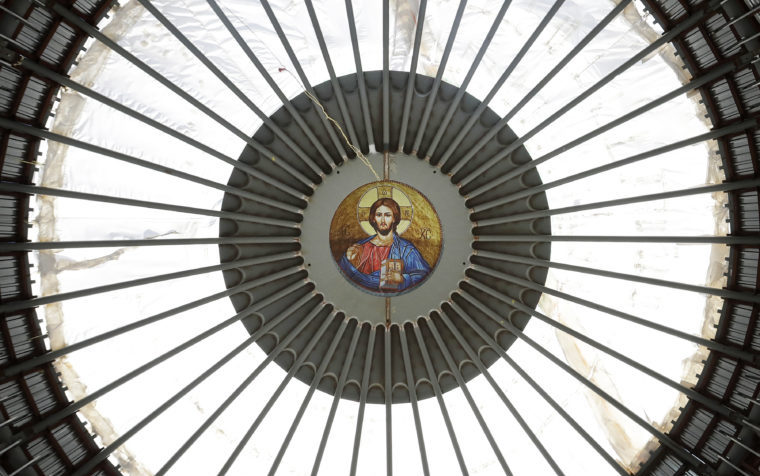 Opening of the Saint-Nicolas sanctuary on September 11

The Sanctuary of St. Nicholas, the church built on the site of the only church demolished in the terrorist attacks of September 11, 2001, will open its doors on the occasion of the twentieth anniversary of the day of the attacks.

Details of the building’s exact assembly are shown in a new video from developer and Saint Nicholas supporter Ilias Katsos, from unique Pentelic stone sheets that are sandwiched between panes to the one-of-a-kind dome.

Together, these materials will be so transparent that the entire building, from the ground up, will shine from the inside out, like a lantern lighting the path in the night.

The construction of the building was an extraordinarily difficult journey, facing charges of corruption and embezzlement, with work stopping at some point. However, the financial problems were ironed out and construction resumed under the firm hand of Elpidophoros, the Archbishop of the Americas, who was elected to his post in June 2019.

Sanctuary of a labor of love for twenty years

Since then, the building’s glossy white walls have been completed and the interior works of art, including frescoes and icons written on Mount Athos, have been created. One of the most striking works of art which will adorn the interior of the church depicts Saint Nicholas, the patron saint of sailors, in a boat outside New York as the city was attacked on September 11, 2001.

Bishop Joachim d’Amissos, the archdiocese’s leading expert in Byzantine iconography, working in tandem with the famous iconographer Father Loukas of the Xenophontos monastery of Mount Athos, collaborated to finalize the details of what the archbishop called the ‘Illumination of the interior’ of the sanctuary. which gives life to the sacred space.

The â€œPantokratorâ€ icon pictured here will be an important addition inside the dome of the small shrine. This will include the only part of the dome that is not transparent; the rest of the round structure other than the ribs will be completely translucent so that the light from inside the church radiates skyward.

The interior will not be fully finished until the second quarter of 2022.

In a statement just before the city and country commemorates the terrorist attacks and the opening of the church, Archbishop Elpidophoros spoke of the upcoming solemn anniversary, declaring: â€œIt is a solemn day for our nation. and for the world, especially in light of recent events in Afghanistan.

“This confluence of events – the twentieth anniversary of September 11 and America’s withdrawal from its longest conflict, makes the significance of the National Shrine of St. Nicholas all the more significant, as we will be present on the eve of September 11 to offer our remembrance prayers for all who perished on that day and in the decades that followed as a result of these terrible attacks.

The Archbishop of the Americas went on to say that on September 10 there would be an illumination of the reconstructed St. Nicholas Greek Orthodox Church and National Shrine for the very first time.

At sunset, he said, â€œwe will shine the light of Christ, the light of our Orthodox Christian faith, the light that can never be overcome by darkness. And so, we will begin the ministry of love, healing, reconciliation and peace at Ground Zero.

â€œOur church and national sanctuary will have the heavy responsibility of providing the missing piece of faith in the new reality of Ground Zero.

“The light that will shine that night and all the nights to come will bear witness to the love of God for all men, as it is so well said:” It is much better to light a candle than to curse the darkness.

“The darkness that enveloped New York on that fateful day was fueled by the spiritual darkness that comes from hatred and ignorance,” he said, adding that Saint Nicholas’ mission is now “to proclaim that Christ is the light of the world, and to share this light with everyone. What a unique privilege to do so in this place, the epicenter of 21st century history! And what an impressive responsibility!

â€œMay the memory of all who perished on September 11, and all whose lives ended as a result of that day, be everlasting. “

The Friends of St. Nicholas group recognizes the supporters and builders of the shrine

The Friends of St. Nicholas, led by President Dennis Mehiel and Vice President Michael Psaros, noted in the announcement that â€œthousands of our fellow citizens and human beings have been martyred at Ground Zero, the Pentagon and Shanksville, PA.

“In their memory, and in honor of the heroes who climbed floor after floor in these Towers to save their neighbor – and whose ascension was not complete until their arrival at the Gate of Heaven, we are rebuilding – indeed, resuscitating the Holy Church of St. Nicholas at Ground Zero.

â€œAt this time, when we remember all of those who perished that day, we want to thank everyone who helped us rebuild. The construction crews and the companies that have persevered despite COVID have been truly extraordinary.

â€œBut we also want to thank you all, the community of supporters who generously provided for the needs of the rebuilding of St. Nicholas. Every donation, every donation – big and small – has lent a helping hand to the construction crews who seal the glass. , lift marble, cut stone and make this sanctuary for the nation, a house of prayer for all. “