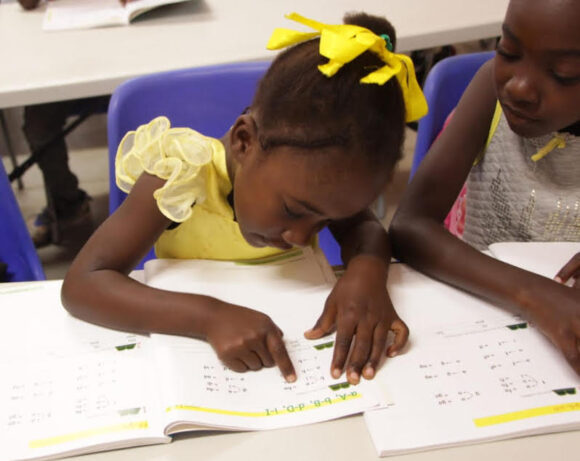 The Crosby Haitian Education Fund is guided by the deep belief that a better future for Haiti depends on educating its youth and preparing them for professional careers in Haiti.

How an idea conceived in Old Lyme, Connecticut turned into an organization making a crucial difference in the lives of more than 500 students in one of the most disadvantaged areas of the Caribbean island of Haiti , which in turn is one of the poorest countries in the world?

The answer lies in a woman, Rebecca ‘Becky’ Crosby, who, along with her husband Ted, founded the Crosby Fund for Haitian Education (CFHE) in 2003.

How it all began ?

Crosby explains that his first trip to Haiti was in 1999 and occurred through the First Congregational Church of Old Lyme (FCCOL) while Amy Bruch worked there as associate minister. Bruch had bonded with the late Dr Wayne Southwick of Old Lyme, retired chairman of the Department of Orthopedics and Rehabilitation at Yale University.

Each year, Dr Southwick led a team of Yale doctors at Albert Schweitzer Hospital in Deschappelles, Haiti, where they performed surgeries around the clock and at no cost to the local population. Deschappelles is located in the rural Artibonite valley about 90 miles north of the national capital, Port-au-Prince.

Inspired by Southwick’s work, Bruch decided that she, in turn, wanted to take a team of volunteers to the same hospital to support her efforts. She successfully organized the trip by bringing together a group across the church, including Becky Crosby. They took a sewing machine with them, Becky recalls, and their main job was to make privacy curtains for the hospital.

Ted and Becky Crosby attended the opening of a new medical center in Liancourt, Haiti in May 2021. The Center was founded by one of the graduates of the Crosby Fund for Haitian Education program, Dr. James Kerby Estime, who named the Center to Becky’s honor.

While on the island, Becky noticed a young man who regularly sat outside where the volunteers were staying. One day Crosby asked him why he was not in school and he explained that he was lucky enough to have a sponsor from the United States before, but those funds had stopped. As school is not free for anyone in Haiti, he was no longer able to attend because his family simply could not afford it, and he was hoping by interacting with some of the American visitors to town that he could find a new sponsor.

Becky says, “I was surprised to learn that school was not free” and almost instantly made the decision to pay for the young man – Oltin – to finish high school. This turned out to be more difficult than she thought because there was no postal service in Haiti and the young man did not have a bank account. Becky, however, was determined and eventually found a way to pay her school fees through an American doctor working in Haiti.

Three years later, in 2002, Becky returned to Deschappelles to meet Oltin on the occasion of her high school graduation. She remembers: “I saw it and it was a wonderful visit. She adds significantly: “I couldn’t believe what the gift of an education could do. “

She started researching overall education statistics in Haiti and was amazed to find that only 55% of the country’s children attend primary school, a number that drops to 15% for those who graduate. of high school, and ultimately drops to a mere 2 percent, who go to college.

Less than half of Haitian families can afford school for their children. Therefore, one of the main goals of the Crosby Haitian Education Fund is to provide full scholarships for students from kindergarten to university.

It suddenly became clear to Crosby that “if you want to build Haiti, you have to educate the youth. At this transformative moment in her life, she made a personal commitment to trying to do something to achieve this almost irresistible goal.

Upon returning home, she shared the idea with her husband Ted, who supported the concept, and in response, embarked on her own information trip to Haiti in 2003.

After Ted returned and expressed her full commitment to the project, Becky returned to Haiti again and began to “invent ways to create the organization” there and “form a council to select the students.” [who would receive scholarships.]

Back home in Old Lyme, a determined Becky began working to find local donors, who were willing to fund students in Haiti, who otherwise would not have completed high school.

Not an easy task in any way, but soon after she had managed to recruit 32 people willing to do just that and so formed the first seeds of the Crosby Haitian Education Fund. Becky says, “We started with 32 friends who sponsored 32 students,” adding with a chuckle, “I had no idea when I started where this was leading.

The Crosby Haitian Education Fund also offers a wide range of additional academic support to their education center in the Artibonite Valley in Haiti.

Where is the organization today?

The numbers are simply staggering.

A total of 523 students are now supported under the organization’s banner, including 98 in post-secondary schools, 53 in universities and 45 in medical technicians or vocational training establishments. More than 80 schools in the Artibonite valley are now participating in the program.

Over 90 percent of Crosby Fund scholarship students go on to college or technical school, and thereafter CFHE graduates are employed at three times the national average.

Additionally, Lyme’s Faulkner Hunt, who is CFHE’s Marketing Director, says, “Our goal is to educate children,” not just as an end in itself, but “to bring them to a place where they have a benefit. paid employment.

Did the creation of the CFHE have any unexpected effects?

The project changed Becky’s life on a personal level in many ways.

More importantly, when the CFHE had reached a total of around 300 students under its wing, she felt she needed to step down from her role as Associate Minister at FCCOL – a post she had taken after Catherine left. Zall (Zall had followed Bruch) – and devoting his full-time energies to the growing organization.

She explains that she quit with three clear goals in mind.

The first was to find or build a sort of “permanent room” for the CFHE, which could both house staff and provide classroom space. The second was to establish an endowment fund and the third, and perhaps most important, to put in “some sort of staff in the United States” to work on “succession planning” for the organization. in order to establish continuity for it in perpetuity.

Becky proudly says, “All of these things are in place now” which has helped “Planning for the Future” immensely.

The construction of the Education Center in Deschapelles achieved the first objective. The three classrooms and the computer lab provide a wide range of tutoring opportunities, which Becky says is extremely important, noting, “Math is a huge problem.”

With more than a hint of emotion in her voice, Becky said: “It’s so emotional to see someone my age struggling to write their own name… then go back. [after the program has been completed] and see them write easily. It’s very, very touching. “

How are the students who will benefit from the scholarships selected?

Becky explains, “We have a great staff in Haiti, which includes six graduates from our program. “On the strength of their knowledge of the environment, they select candidates who, in their opinion, will benefit from financial support. The process is clearly working since the graduation rate of students supported by CFHE is significantly higher than the national average.

Besides scholarships and mentoring, another part of the Crosby Foundation’s work is its career development program. Becky says passionately, “Graduates need jobs… it’s hard to find one… we try to keep them in Haiti. The program helps graduates secure internships and jobs across Haiti, and Crosby points out that he has already trained doctors, nurses, computer programmers and administrators, most of whom are now employed in Haiti.

She adds that CFHE has also helped students in other career paths, including helping four agronomy students start an agricultural business.

What is the impact of Lyme donations, Old Lyme?

An extraordinary aspect of financial support for CFHE is that the “vast majority” come from Lyme and Old Lyme according to Hunt. He comments that it is remarkable: “These two small towns can have so much compassion for a small region of Haiti”, adding: “It is such a beautiful example of selflessness.

Referring to all CFHE donors, Becky said, “I wish I could bring them all to Haiti so they can see what they are doing for the youth of Haiti. I would like to be able to share this experience with the people who have helped us.

Becky enthusiastically expands on what she calls “the real joy” of CFHE’s accomplishments, saying, “When a child you chose on the street does very well in school, even in college, finds a job, get married, have children going to school… Bingo is the dream! This is what we are trying to do. It won’t happen overnight… we don’t expect miracles… but in the end, it’s about building the nation one step at a time.

Editor’s Note: For more information on the Crosby Haitian Education Fund, visit their website or follow them on their Facebook page. If you would like to make a donation to support the work of the CFHE, visit this link. All contributions, regardless of size, are gratefully accepted.