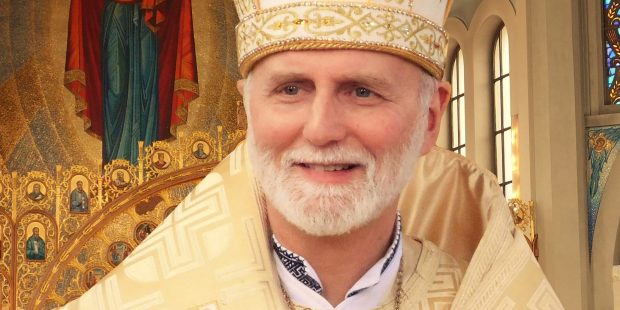 A native of Syracuse, New York, who spent many years as a Catholic leader in Europe, will return to the United States this week as Archbishop of the larger Eastern Church that is in fellowship with Rome.

Archbishop Borys Gudziak, 58, will be inducted Tuesday as the Metropolitan Archbishop of the Ukrainian Catholic Archeparchy, or Archdiocese, of Philadelphia.

Bishop Sviatoslav Shevchuk, head and spiritual father of the Ukrainian Catholic Church in the world, and Bishop Christophe Pierre, apostolic nuncio in the United States, will preside over the Hierarchical Divine Liturgy during which Bishop Gudziak will take possession of his new archparchy.

Bishop Gudziak succeeds Metropolitan Archbishop Stefan Soroka, whose resignation for health reasons was accepted by Pope Francis in April 2018. After the Synod of Bishops of the Ukrainian Catholic Church, meeting in Ukraine in September, made its recommendation to the Holy See, Pope Francis announced the appointment of then-Bishop Gudziak as the seventh Metropolitan Archbishop of the Archparchy of Philadelphia on February 18.

The new spiritual leader of members of the Ukrainian Greek Catholic Church in the United States was more recently eparch, or bishop, of the Paris Eparchy of Saint Volodymyr the Great for France, Switzerland and the Benelux, a post qu ‘he held from 2012.

Born in 1960 in Syracuse, NY, to immigrant parents from Ukraine, Gudziak received a bachelor’s degree in philosophy and biology from Syracuse University in 1980, then studied in Rome. There he was close to Major Archbishop Josyf Slipyj, the exiled head of the Ukrainian Greek-Catholic Church who had spent many years in the Soviet gulag. Gudziak obtained an STB degree in theology from the Pontifical Urban University in 1983, then a doctorate in Slavic and Byzantine cultural history from Harvard University in 1992. In 1995, he obtained a bachelor’s degree in Eastern Christian studies from the Institute. Eastern Pontifical of Rome.

In 1992, he moved to Lviv, Ukraine, where he founded and directed (1992-2002) the Institute of Church History. In 1993 he was appointed chairman of the Commission for the Renewal of the Theological Academy of Lviv.

From 1995 to 2000, he was vice-rector of the Lviv Theological Academy, then as rector from 2000 to 2002. In that year, Gudziak became rector of the Ukrainian Catholic University (founded on the basis of the Academy), and in 2013 its President.

As head of the eparchy in Paris, Gudziak is credited with increasing the number of priests and parishes, establishing a new financial model for the sustainability of the eparchy, and extensively engaging the laity.

He is also a member of the Permanent Synod of the Ukrainian Greek-Catholic Church and Head of the Department for External Relations of the Church.

During the 2013-2014 Maidan movement in Ukraine, he regularly appeared on major TV channels and world media providing expert commentary.

Gudziak has received numerous awards and distinctions. In 2015, he became Cavalier of the Order of the Legion of Honor (Knight of the National Order of the Legion of Honor), the highest decoration in France. In 2016, he received the Jan Nowak-JezioraÅ„ski Prize in Wroclaw, Poland, in recognition of his work in shaping civil society in Central and Eastern Europe. In 2018, he received an honorary doctorate from his alma mater, Syracuse University, and a literary award from the Ukrainian section of PEN International. He travels around the world with lectures and lectures on theology, history, spirituality, education, society and current challenges in Ukraine. He speaks English, Ukrainian, Italian, Polish, French, Russian and German. Gudziak is the author of a number of scholarly works, among which Crisis and reform: the metropolis of Kiev, the patriarchate of Constantinople and the genesis of the Union of Brest (Harvard University Press, 1998). He is one of the authors of A lexicon of Pope Francis, edited by Cindy Wooden and Joshua J McElwee (Liturgical Press, 2017) and a collection of essays on the future of Europe.

Tuesday’s induction ceremony will begin at 11:00 a.m. and will be broadcast by EWTN. The installation is marked by a number of other events this week. On Sunday, George Weigel, biographer of Pope John Paul II, gave a lecture at the Cathedral of the Immaculate Conception of the Archeparchy of Philadelphia on the theme “Witness of the twentieth century and mission of the twenty-first century: Eastern Catholics and the Universal Church â€.

On June 6, Bishop Gudziak will address â€œThe Future of the Ukrainian Catholic Church in North Americaâ€ at a conference held at the Catholic University of America. The Catholic University’s School of Theology and Religious Studies will announce the creation of a Ukrainian Church Studies Center within the new Institute for Eastern Christianity.

That morning and the following mornings, His Beatitude Sviatoslav will celebrate a hierarchical Divine Liturgy at the Ukrainian Catholic National Shrine of the Holy Family in Washington. He will return to the Cathedral of the Immaculate Conception on Saturday to deliver a speech on a Youth Day, and will preside over the Divine Liturgy in the Cathedral on Pentecost Sunday.