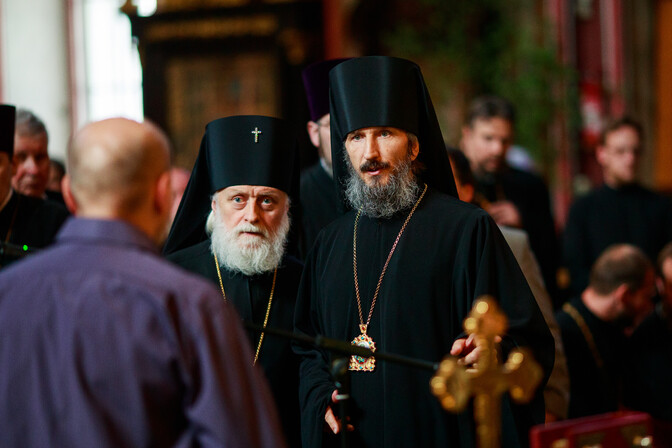 “If there are legal grounds for revocation and if it is necessary, a residence permit can be revoked at any time, regardless of the physical location of its holder,” said Ilmo Au, head of the Department of Foreign Affairs. religious affairs of the ministry. Metropolitan Eugene is currently in Russia.

The Estonian authorities want Eugene to publicly comment on the words of Patriarch Cyril of Moscow and All Russia justifying Russian aggression in Ukraine.

To this end, the Metropolitan was summoned last week for a meeting with the Undersecretary of the Ministry Raivo Küüt. Because Eugene was not in Estonia at the time, the meeting was attended by Vicar Bishop Sergi and Archpriest Juvenalius.

“We want to know the position of the Estonian Orthodox Church of the Moscow Patriarchate and its head regarding the statements of Patriarch Kirill made on Sunday, September 25. We have stressed that we expect the Church to explain and publicly communicate its position on Kirill’s statement, Au said on Tuesday.

The head of the Russian Orthodox Church, Patriarch Kirill, said on September 25 that Russian soldiers fighting against Ukraine were responding to their call and fulfilling their duty to the homeland and society, therefore their actions amounted to a sacrifice and demonstrated their loyalty to their vows. Kirill said that fallen Russian soldiers are absolved of all sins.

Au clarified that Undersecretary Küüt told MPEÕK representatives on September 28 that the Patriarch’s statements could be treated as obvious influence activity and justification for the Russian Federation’s aggression in Ukraine.

“Such influence activity is not permitted in Estonia, and the church must provide divine service to its flock without persuasion. Nor should the positions of the church and its leader constitute such influence activity. If something like this happens, sanctions reflecting the nature of the acts and the motivation of the perpetrators will follow,” Au warned.

The Patriarch’s statement drew criticism from Prime Minister Kaja Kallas (Reform), Interior Minister Lauri Läänemets (SDE) and the President of the Estonian Council of Churches, Archbishop Urmas Viilma of the Evangelical Lutheran Church of Estonia (EELK). The latter described the speech of the head of the Russian church as a justification for violence.

Ilmo Au said that a residence permit can be revoked based on the grounds set out in Article 135 of the Aliens Law. “Anyone who resides in Estonia on the basis of a residence permit must comply with the conditions that apply to that particular reason for residence, for example, Article 124 of the Aliens Act. The permit may be revoked if it is proven that he has not complied or has not satisfied conditions,” the ministry representative said.

Article 135 of the law provides that a fixed-term residence permit will be revoked if a foreigner’s actions pose a threat to public order or national security. Article 4 of paragraph 2 of article 124 of the same law provides that a fixed-term residence permit shall be refused if the foreigner has, is or there is reason to believe that he has, is or incite racial, religious or political hatred and violence. .

The head of the ministry’s department revealed that MPEÕK representatives have suggested that Metropolitan Eugene be in Russia for health reasons where he is likely to stay until he has fully recovered.