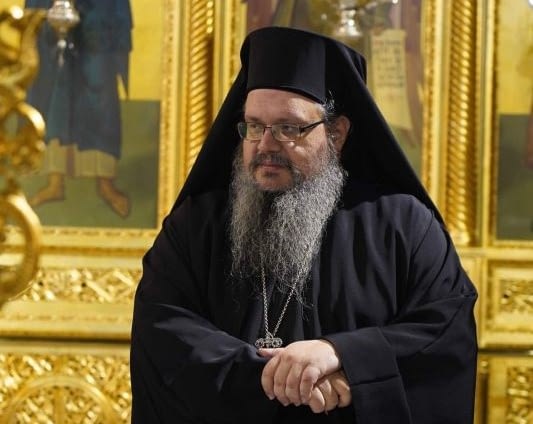 Metropolitan Ieronymos of Larisa and Tyrnavos at TNH

BOSTON – His Eminence the Metropolitan of Larisa and Tyrnavos Ieronymos spoke to the National Herald about the pandemic, the antivaxxers and the chocolates he handed out to them when they demonstrated outside churches where mobile vaccination centers had gone to offer vaccines to those who wanted them. He also talked about the “Gerontes”, the “gurus” who try to control the lives of people and the Greek-American community, which he admires.

It should be noted here that Metropolitan Ieronymos is a hierarch of the younger generation. He was born in Athens in 1971 and graduated from the Faculty of Law of the University of Athens as well as the Faculty of Theology from the same university. He also did post-graduate studies at the University of Groningen in the Netherlands, specializing in the history of Byzantine-Roman law. He speaks Greek, English, German, Dutch and Turkish.

The National Herald: Your Eminence, let’s start with a question about how the local Church in Larisa has coped with the pandemic and how are they handling the situation today?

Metropolitan Ieronymos: The pandemic has been and still is something very difficult for all of us. At first, there was no previous experience of anything like this. A few people may have had theoretical knowledge, but many had believed that our science had already overcome such phenomena and mankind would never have to experience them again. But now, everything is denied! For almost two years we have been living with an invisible threat, due to which many of our fellow citizens have died wrongfully. From the first moment, it became clear that our compliance with the sanitary measures proposed by the experts was the only way to support this. This is what we have done and continue to do. We pray and follow the advice of experts, believing that God is not unjust and will stop testing us.

TNH: Have you had any cases or even victims among the clergy and the laity of your Metropolis?

Metropolitan Ieronymos: I pray a lot for everyone. Thank God none of the priests in our diocese have died due to COVID-19. About 40 of them got sick, but they all got over it, some easier, some harder. Unfortunately, those who have died due to the pandemic in our region are too many. The pandemic has highlighted the education deficit we have as a society and the catechism deficit we have as a Church. From one extreme, we have arrived at the other. Where we had deified science, we began to distrust it. And where many scoffed at the Faith, they have now turned to bigotry.

TNH: Are there priests among those who oppose vaccination?

Metropolitan Ieonymos: There are people who are afraid and it makes sense that anyone can post anything uncontrollably and irresponsibly on the internet without consequences. How can one listen to what the experts say and convince oneself of it, when the confused voices of demagogues cover it?

TNH: Other than the loud groups that gather and shout outside churches, are there any other groups?

Metropolitan Ieronymos: It is a fact that there are many who oppose vaccination and some of them, obviously very few, have serious arguments to make. These, however, get lost in the absurdity and stubbornness that characterizes much of the anti-vaccination movement. I have discussions with those who try to talk seriously. For the rest, I pray that God enlightens them, because their actions often amount to suicide.

TNH: Were the chocolates you gave them effective? Did they tone down their cries?

Metropolitan Ieronymos: Chocolates have been effective in making Greek society understand that some people cannot be taken seriously, because they don’t let themselves be taken seriously. Essentially, the lack of arguments from those leading such movements has emerged.

TNH: According to you, who or what is at the origin of such phenomena of narrow-mindedness?

Metropolitan Ieronymos: There are many who want to capitalize and make political gains. We are less than two years away from the next municipal and regional elections and many are investing in the anti-vaccine vote. Also, some religious groups, such as the old calendars, etc., have found the opportunity to make their presence felt. Then comes the influence of the American far right, which, through websites and translated texts, tries to transform itself into a global movement, causing a particular type of globalization.

It exposes us as a Church. The Orthodox Church has its eschatology, the central idea of ​​which is that many terrible things can happen, but in the end, Christ and his people will win. All we see now is a new heresy, a perversion of orthodox preaching on the end, even with the invocation of saints, who obviously never said the nonsense that some “ingenious” claim to have.

TNH: Really, how do you separate what the Church is from what it isn’t?

Metropolitan Ieronymos: There is always the bit of leaven, the small amount of dough, so to speak, which suffices to renew the world, if the world understands that it needs it so much.

TNH: What do people and especially young people tell you about the Faith and the Church?

Metropolitan Ieronymos: They are looking for him. They want to meet him. They want to be honest about their faith and not superficial or formal. I am happy about it, but at the same time it upsets me because it is my responsibility to present them to Christ the Savior in an authentic way.

TNH: What issues concern them?

Metropolitan Ieronymos: According to their nature, from the most common to the most unlikely. From day-to-day issues to issues so unique they make you feel uncomfortable. They may not just need answers. I don’t remember the answers to the questions given to me by my catechists, the clergy, the priests I met, especially in my youth. I only remember who loved me and who treated me with respect and that was enough for me. Beyond that, it’s a matter of personal freedom, personal responsibility and personal decisions.

TNH: What is your opinion of the Omogenia of America?

Metropolitan Ieronymos: I have never visited America. I did not have communication and relations with the Hellenic diaspora to form an opinion, even though one of my grandfather’s brothers immigrated to America at the beginning of the 20th century. However, I meet many people who return to Greece either for holidays or to live there permanently. They are proud people of hard work who have maintained values ​​and ideals in a very difficult atmosphere. I respect them. I cry with them when they discover that their homeland is no longer the one they left behind when they decided to immigrate, and I try to share the bitterness they feel at the unexpected behavior of their compatriots. I am happy when they rise above human pettiness and see the true greatness of Greece and rush to serve it. Because in the end, we all do that. We serve God and our country so that our conscience is clear, our hearts are happy and our minds are satisfied with the feeling that we have done our duty.