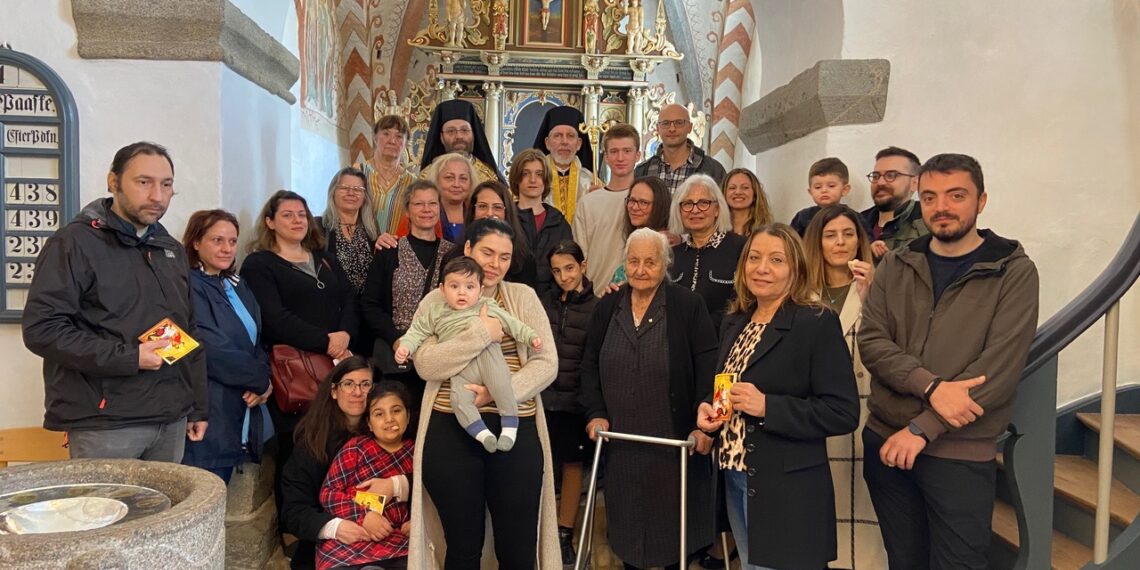 In the midst of the joyful ecclesiastical period of the Resurrection, Metropolitan Cleopas of Sweden and All Scandinavia made a three-day archpastoral visit to Denmark from Friday May 13 to Sunday May 15, accompanied by Archimandrite Alexandros Loukatos, Presiding Priest of the Metropolitan Church of the Annunciation of Theotokos in Oslo.

The clergy arrived in the city of Århus in northern Denmark on Friday May 13, where they were greeted by Rena Christou. That same day, Christou hosted a dinner at her home, which was attended by Metropolitan Cleopas, Fr. Alexandros and the local Greeks who thanked the Metropolitan for his visit to Århus, the second capital of Denmark, located on the Jutland peninsula.

During the dinner conversation that followed, Metropolitan Cleopas spoke about his eight years of service in the Northern Lands, the ministries and work of the local Church, and the need to maintain and strengthen communication interpersonal and networking with all Orthodox Christian brothers living in areas where organized parishes have not yet been established, or where frequent contact between members of the Greek community is not possible due to the distance between them .

The following day, Saturday May 14, Metropolitan Cleopas presided over the Archieratical Divine Liturgy, concelebrated by Fr. Alexandros at the Tilst Chapel, and graciously made available by his pastor, Reverend Lars Lindgrav Sörensen of the Danish Lutheran Church.
Upon arriving at the church, Metropolitan Cleopas thanked the aforementioned clergyman and presented him with a copy of the Metropolitan’s trilingual edition of the Divine Liturgy of St. John Chrysostom, published by the Church of Greece printing house. Apostoliki Diakonia.
The Divine Liturgy was attended by Hon. Consul of Cyprus in Århus Zoe Winding, together with her mother and a number of mainly younger followers, have been actively involved in the area in recent years.

In his sermon, the Metropolitan spoke of the concern shared by him and his devoted assistants, clergy and lay, for the flock of the Mother Church in Scandinavia, characteristically quoting the ever-memorable Ecumenical Patriarch Athenagoras, who said “come, let’s look at each other! He also pledged to send a clergyman to the city at regular intervals to attend to the liturgical and spiritual needs of the Orthodox Christian faithful living in the area.

A reception followed on site in the parish hall, where Metropolitan Cleopas spoke to all attendees and discussed their concerns about the future of the Greek community in Århus.

Saturday afternoon, Metropolitan Cleopas and Fr. Alexandros flew to Copenhagen, where they attended a dinner hosted by Charge d’Affaires of the Cyprus Embassy in Denmark Iakovos Girakosian at a local restaurant, with the Hon. Greek Ambassador to Denmark Nikolaos Kotrokois was also present.

The following day, Sunday May 15, the Metropolitan celebrated the Archeratic Divine Liturgy, assisted by Fr. Alexandros, at the Church of St. George of Ioannina in Roskilde.

During his sermon, Metropolitan Cleopas spoke about the healing of the paralytic and the anxiety he felt, as evidenced by the phrase “I have no one”. According to the Metropolitan, this sentence is a cry of pain felt by the paralytic because of his loneliness, which is the same cry of anxiety coming from many people in our times who feel abandoned by the world. He went on to explain to the congregations that it is precisely in these cases that we must show our humanity and our Christian ethos by supporting our brothers in need and those who are hospitalized, imprisoned, undergoing treatment in institutions, living in shelters for the elderly. , and everywhere else the cry of “I have no one” is heard.

The Divine Liturgy was attended by Hon. Greek Ambassador Nikolaos Kotrokois and Charge d’Affaires of the Cyprus Embassy Iakovos Girakosian and their aides, whom the Metropolitan all thanked for their presence and support for the ministry of the local Church in Denmark while offering them copies of the book entitled “Anavaseis” written by the always memorable Fr. Eusévios Vittis.
The hymns of the day were sung by Mr. Panteleimon Smyrnakis, whom the Metropolitan thanked for his exemplary service in the Church of St. George in Ioannina.

Also present were parishioners from Roskilde and Copenhagen, members of the parish council, and former Copenhagen Greek School teacher Christina Gatzogia, whom the Metropolitan thanked for her pedagogical contribution over the past five years.

Metropolitan Cleopas also congratulated two members of the parish youth on their appointments to professorships at the universities of Copenhagen and Lund, expressing the pride of the Holy Metropolis for the academic achievements and the recognition of the two young members of the parish.

A reception followed in the parish hall, ending the “four flights and two Easter liturgies” that afternoon, with Metropolitan Cleopas returning το to his eparchy’s headquarters in Stockholm and Fr. Loukatos in his parish in Oslo.