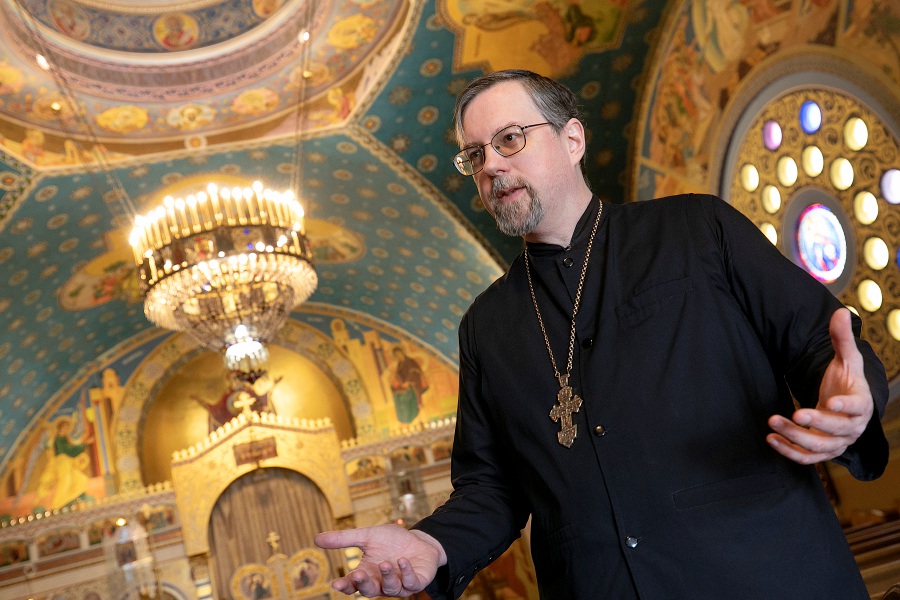 MERIDEN – Archpriest Joshua Mosher of Sts. The Peter and Paul Orthodox Church has to walk a fine line these days as it has parishioners with close ties to Russia and Ukraine. Some parishioners even have family members on both sides of the conflict.

“I can tell you this, there is a lot of pain and a lot of very strong opinions.” Mosher said in the Park Avenue Church sanctuary in Meriden. “They don’t necessarily feel very comfortable sharing them given the current environment.”

“In light of the harrowing developments in Ukraine affecting millions of innocent people in the region, I wholeheartedly urge you to pray for the peace and well-being of our brothers and sisters who are enduring this tragic moment,” said Tikhon in a message to churches. “I demand that hostilities cease immediately and that President Putin put an end to military operations. As Orthodox Christians, we condemn violence and aggression.

Mosher said his great parishioners in Meriden have “deep ties” to both countries. Many are reluctant to discuss their views, he said, because they are processing what is happening. Some Russian immigrants are also afraid of negative reactions.

“I’ve had people ask, ‘Do I still belong here?'” Mosher said. “So it’s my job to do whatever I can to reassure them, ‘This is your Father’s house, you belong here. It belongs to God, it doesn’t belong to us. I don’t close the view of someone because he’s far from the American mainstream right now.

Many worshipers are horrified by the invasion, others are loyal to Russia.

“We have people who think that Russia’s point of view is not represented fairly in the media, and maybe they are right, but I’m not here to debate that,” he said. he declares. “Other people are in real trouble because they have family members in Ukraine and Russia. Some are loyal to Ukraine and some are loyal to Russia. They ask me, ‘What can we do anything but pray.’ We talk about how we live together as a family. You still love them even though you think they’re really wrong.

The invasion of Ukraine has been linked to the religion and complex history of the Orthodox Church. According to the Associated Press, Ukraine’s majority Orthodox Christian population is divided between an independent-minded group based in Kiev and another loyal to its patriarch in Moscow.

Although Russian President Vladimir Putin has justified his invasion of Ukraine in part by defending the Moscow-oriented Orthodox Church, the leaders of both Ukrainian Orthodox factions are vocal in their denunciation of the Russian invasion, as is the sizeable minority Ukrainian Catholic.

The Russian Orthodox Church in Moscow called for prayers for those affected by the war, but did not condemn Putin.

This led to backlash against Russian Orthodox Churches around the world. Last weekend, a Russian Orthodox church in Hartford received a disturbing voicemail denouncing the invasion and the Moscow church’s ties to Putin. There was no threat of violence, but Mosher said Orthodox churches have come to realize the strong ties and emotions aroused by the invasion. After the call, the Hartford pastor was able to meet with the caller and come to a mutual understanding, Mosher said.

“It hasn’t occurred to me yet to answer questions about Russia,” Mosher said. “But it happened during the Cold War, when the Church of Russia was answerable to the KGB. It was a level of oppression. There were clearly unhealthy pressures on all aspects of society. The Orthodox Church in America does not receive its marching orders from Russia.

Like their Ukrainian counterparts, other Orthodox churches are calling for unity in condemning Putin and the invasion. The churches are also coordinating their humanitarian response to Ukraine. In two weeks, the Greek Orthodox Church of New Britain will hold a joint service with other regional churches, including St. Mary’s Ukrainian Orthodox Church of New Britain, Mosher said.

“I visited this church and we walked back and forth,” Mosher said. “It would become a custom. We must overcome these administrative divides. On this day, we must gather instead of staying in your silo.