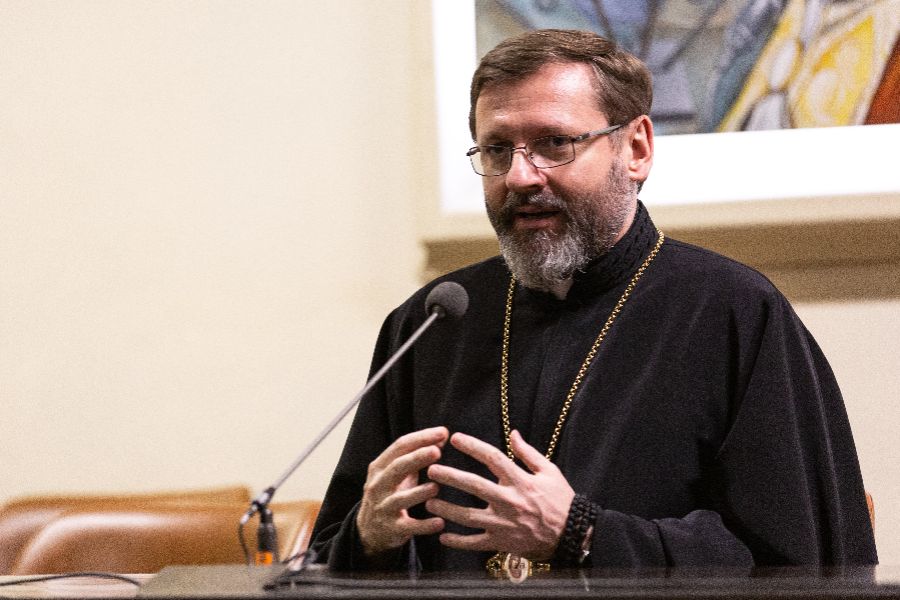 Bishop Shevchuk, who leads the largest of 23 Eastern Catholic Churches in full communion with Rome since 2011, said in his message to Ukrainians that contemplating the unity of the Holy Trinity in the life of the Church could deepen their reflections on the unit.

The head of the Ukrainian Greek Catholic Church urged Ukrainians to remain united in the face of “this great threat… on our borders”.

Major Archbishop Svyatoslav Shevchuk noted that internal unity within Ukraine was essential “for the security and survival of our people” as the Eastern European country faces a potential full-scale Russian invasion.

The Archbishop’s call for unity preceded President Volodymyr Zelenskiy’s declaration that February 16 will be a “day of unity” in Ukraine.

“They tell us that February 16 will be the day of the attack. We will make it a day of unity,” Zelenskiy commented in a video message on Feb. 14, according to Reuters, which noted that the Ukrainian president was not planning an attack, but responding to foreign media reports.

“On this day we will hang our national flags, carry yellow and blue banners and show the world our unity,” Zelenskiy said.

Cardinal Pietro Parolin, Vatican Secretary of State, called Archbishop Shevchuk on February 14 to express the solidarity of the Holy See with the Ukrainian people, according to a February 15 statement by the Ukrainian Greek Catholic Church.

“The Ukrainian people feel the Holy Father’s special concern for peace in Ukraine and appreciate the diplomatic efforts of the Holy See to combat the current international crisis,” Bishop Shevchuk said in response to the appeal.

Bishop Shevchuk, who leads the largest of 23 Eastern Catholic Churches in full communion with Rome since 2011, said in his message to Ukrainians that contemplating the unity of the Holy Trinity in the life of the Church could deepen their reflections on the unit.

The Latin Catholic Bishops’ Conference of Ukraine has called for February 16 to be a “day of intense prayer and fasting.”

“At this difficult time, as we face growing tensions over the threat of a full-scale military invasion of Ukraine, we call on all of you to continue to pray earnestly, looking up in confidence to God, the Lord of the world and history,” the Ukrainian bishops said in a February 15 message. declaration.

In particular, the Catholic bishops asked people to pray the Rosary of Divine Mercy at 3 p.m. local time, with the intention of “asking God to remove the threat of war, for the safety of our families and the gift of peace for Ukraine and the world.”

“Let us pray to God with the words of supplication: “Holy God, Holy Mighty, Holy Immortal, have mercy on us. From the sea, from famine, from fire and from war, save us, Lord,” they said.

In neighboring Belarus, which shares a nearly 700-mile border with Ukraine, Bishop Aleh Butkevich, head of the Belarusian Catholic bishops’ conference, also called on Catholics to show solidarity across prayer and fasting for peace February 16.

Ecumenical Patriarch Bartholomew I of Constantinople, considered “first among equals” in the Eastern Orthodox Church, called for peace in Ukraine in a February 13 statement.

“The possibility of a new war in Europe, resulting from the escalation of violent rhetoric and the militarization of the borders between Russia and Ukraine, must be opposed unequivocally. We call for lasting peace, stability and justice in the region,” the Orthodox Patriarch said.

“We call on all parties concerned to continue on this path of dialogue and respect for international law, in order to end the conflict and allow all Ukrainians to live in harmony. Guns are not the solution,” he said.

“Silence and indifference are not an option,” he added. “There is no peace without constant vigilance.”

Cancel more student loans for ‘every chance’ in 2022