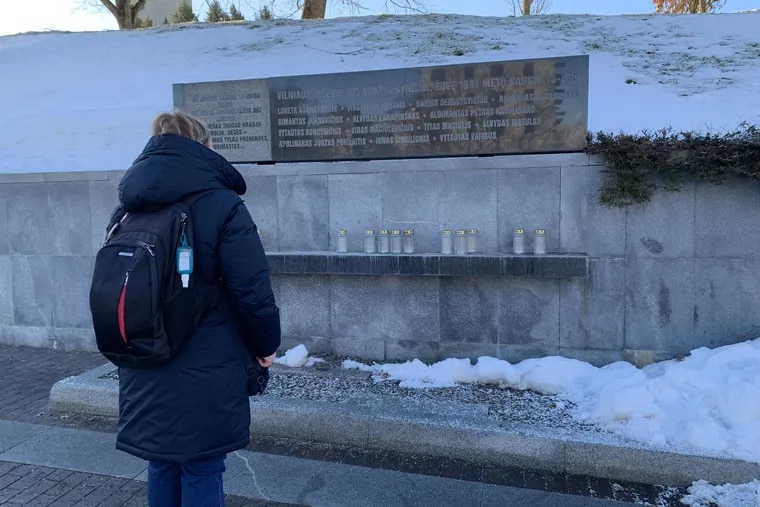 VILNIUS, Lithuania — The military and political games Vladimir Putin is playing with all of Europe will continue whether Moscow invades Ukraine or not. Nowhere in Europe do leaders and citizens understand this hard truth better than in the vibrant capital of the small Baltic state of Lithuania.

In this country of less than three million people, Lithuanians fought Soviet troops to retain their independent state after breaking away from the Soviet Union and declaring independence in 1990. They believe that without joining the NATO, acquired in 2004, Putin could see as a potential next meal – having devoured neighboring Belarus and Ukraine.

So I came to Vilnius, the capital of around 600,000, which includes a spectacular historic old town and an active tech scene and arts community, to see the Ukraine crisis through the eyes of those who see Putin’s threats. without illusions. We should listen to what the Lithuanians are saying.

Those in charge here are lucid about Putin’s efforts to force Ukraine and Belarus – and other former Soviet republics – back under Kremlin rule. For this reason, they support Ukraine’s NATO membership, even though Russia’s military threats have ruled it out for the foreseeable future.

“Without NATO membership, we would be in a gray area like them [Ukraine]said the Chairman of the Lithuanian Parliamentary Committee on National Security, Laurynas Kasčiūnas, over coffee at the elegant Stikliai Hotel in the heart of Vilnius’ Old Town. In Russian eyes, a gray area does not mean neutrality between East and West; it means Moscow rules.

Lithuanians understand that Putin is using his threat to invade Ukraine as a weapon to force the West to revamp the current security system in Europe, demanding that NATO withdraw all troops and installations from NATO member states in Eastern Europe. So far, NATO, led by Washington, rejects this blackmail.

But Lithuanians fear that some key European states, including France and Germany, will sign up to Putin’s insincere offer to negotiate Ukraine’s future. (The Russian leader ignored or broke every agreement Russia signed with the Ukrainians starting in the 1990s, invading the country and annexing Crimea in 2014.)

“Putin is using the weakness of the West,” Kasčiūnas argued. “He comes to negotiations ready to fight. The West comes with a diplomatic approach, which means concessions.

The leaders of this small Baltic state have fought to preserve their democracy and see Putin’s military moves as an authoritarian threat to other democratic states in Europe. A visit to some key memorials to those who died in Lithuania’s independence struggle in 1990-1991 clearly shows the country’s resolve.

For 1,000 years, the Lithuanian state has had a long and tortured history of kingdom, empire, union with Poland and suzerainty by Russia. Lithuanian leaders boldly declared their independence before the breakup of the Soviet Union, even though Western European states did not support them.

When Soviet troops attempted to repel them, including an attack on a mass demonstration at the Vilnius TV tower on January 13, 1991, unarmed citizens fought back. Today, as parents whisk children up the elevator and up to the revolving restaurant atop the TV tower, a poignant photo exhibit on the ground floor pays tribute to 13 young men and a young woman who were shot down or crushed by Soviet tanks as they defended the tower.

Outside the television tower, in front of a concrete bollard bearing the names of the dead, visitors light candles in their honor.

Drive less than 20 miles down the highway, just before the border with Belarus, and you see another symbol of their bold independence struggle: a small trailer-like shed encased in glass, then a row of seven white crosses, mounted on a concrete plinth almost covered in snow.

It is a memorial to the seven unarmed Lithuanian border guards who were shot in the head, execution style, by Soviet special forces on July 31, 1991, as Moscow attempted to annihilate Lithuanian efforts to protect their newly independent borders. They did not give in.

In an ironic twist, that same Belarusian border, so close to Vilnius, is another key reason why Lithuanian officials are so urgently warning against Putin’s current military games.

As part of Russia’s military encirclement of Ukraine, Putin has moved 30,000 troops to Belarus for so-called “exercises” along Ukraine’s northern border. The Russian president has made it clear that he considers Belarus to be part of Russia, just like Ukraine.

“Belarus definitely changes the whole computational and strategic environment for Europe and NATO as a whole,” Deputy National Defense Minister Margiris Abukevičius told me in his office. With the deployment of these troops, Russian troops can now move to the Lithuanian border.

In other words, while Europe focused on Putin’s threats against Ukraine, the Russian leader actually annexed Belarus. (Stay tuned for more on what that means in an upcoming column.) This new Russian presence in Belarus (and Lithuanians don’t believe Putin’s claim that his troops will move from there) cuts almost Lithuania and the other two Baltic States from the rest of Western Europe.

Only a 60-mile stretch of border with Poland, known as the Suwalki Gap, gives Lithuania an outlet to other NATO member states, a stretch that could be easily cut off by Russian troops in a conflict. “We feel like West Berlin in Soviet times,” Kasčiūnas said.

Lithuanians are urging Washington, along with French and German leaders, to shed any illusions that Putin’s thirst for recreating Russian “greatness” can be satisfied by denying Ukraine NATO membership. Abukevičius insists: “The German approach is to engage. Our approach is dissuasive. In our experience, diplomacy is unlikely to succeed [with Putin]. Concessions only invite him back.

Deterrence means sending more troops to NATO countries in Eastern Europe and adopting tough sanctions against Russia from the start, including on the Nord Stream 2 gas pipeline between Russia and Germany, without waiting for an invasion. In other words, demonstrate the high cost of Russian military threats now, rather than being drawn into selling Ukraine at the negotiating table.

Seeing how Putin rocked the West for weeks by threatening to invade Ukraine, I think the West would be wise to heed the advice of the Lithuanians.

Riverstone Credit continues its transition to green and sustainability-linked lending