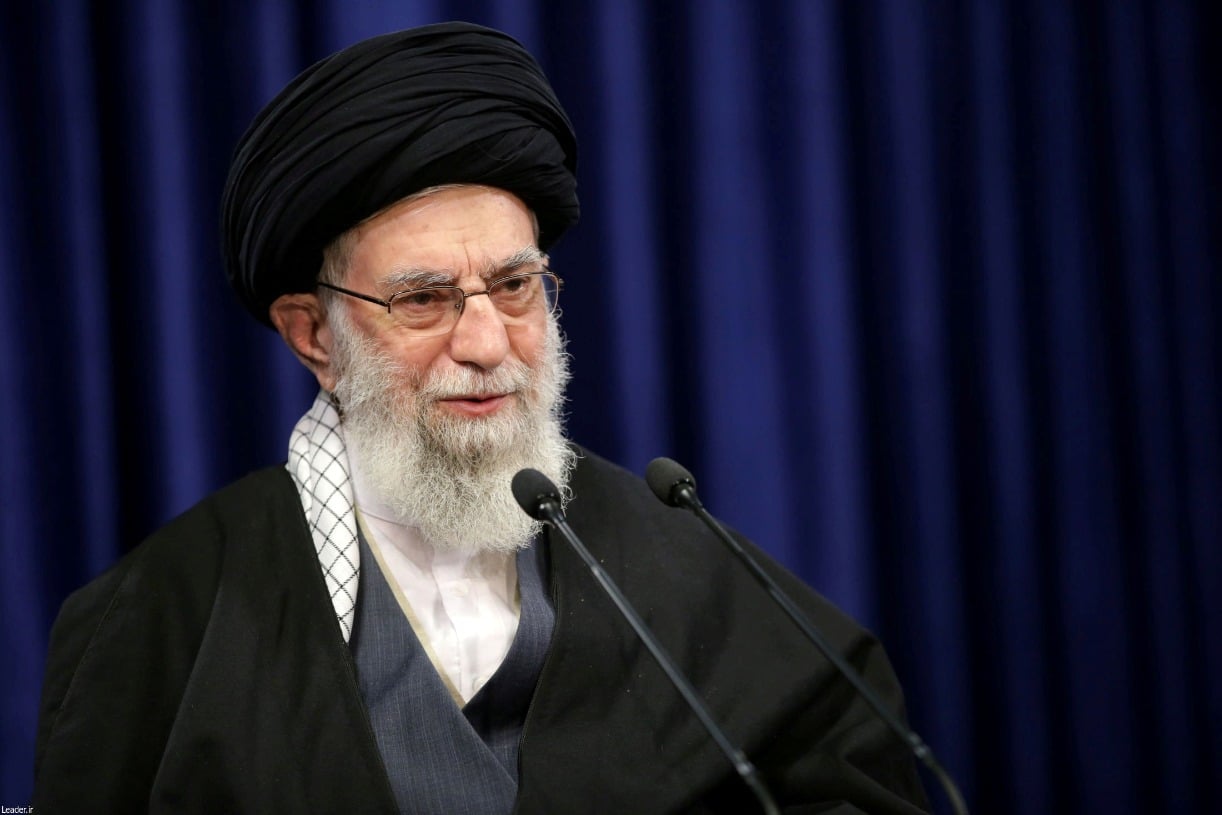 The Biden administration is said to be on the verge of lifting all sanctions against numerous of Iran’s worst human rights violators and sponsors of terrorism in return for Iran’s remarkably weak nuclear concessions. History has shown that it is both unnecessary and counterproductive to sacrifice human rights concerns to achieve arms control goals.

Presidents Jimmy Carter and Ronald Reagan, in part at the insistence of Congress, maintained strong human rights pressure on the Soviet Union while successfully negotiating important arms control agreements. The current Congress should step in to ensure that the administration’s rush to strike a deal with Iran does not undermine accountability for Iran’s gross human rights abuses and sponsorship of terrorism.

Iranians who go would have to be released from all sanctions under the nuclear deal include Supreme Leader Ali Khamenei, President Ebrahim Raisi, Vice President Mohsen Rezaei and Hossein Dehghan, a former Islamic Revolutionary Guard Corps brigadier general ( IRGC). Each has a horrific record of personal responsibility for human rights abuses and terrorism.

Khamenei was president of Iran from 1981 to 1989 and has been its supreme leader ever since. As such, Khamenei is ultimately responsible for four decades of Iran’s human rights abuses and support for terrorism. A US federal court tried Khamenei personally responsible for the deaths of nineteen American servicemen in the bombing of the Khobar Towers in Saudi Arabia. Federal courts also tried Khamenei personally responsible for the deaths of American civilians in three terrorist attacks in Israel, two on public buses and one in an open-air market in Jerusalem.

Raisi is responsible for the execution of thousands of political prisoners and the unlawful torture and execution of hundreds of peaceful protesters. All sanctions would also be lifted against Rezaei, a former IRGC commander wanted by Argentina for organizing a 1994 attack on a Jewish community center that killed eighty-five people. Dehghan is responsible for mass executions commander of the Tehran branch of the IRGC. He also has order the IRGC in Lebanon when Iran ordered the bombing of Beirut barracks, which killed 241 US Marines.

The nuclear deal is would have also about to lift all sanctions against the IRGC, which is responsible for the deaths of hundreds of Americans and carried out terrorist activities that violated human rights around the world for decades. This sends a particularly counterproductive message in the wake of recent reports that the IRGC is actively working to assassinate former US government officials, including former US national security adviser John Bolton.

Lifting sanctions against these Iranian human rights abusers and sponsors of terrorism would send a dangerous message of impunity to Vladimir Putin and his henchmen at a time when they are committing war crimes in Ukraine and human rights violations in Russia. Such a decision is contrary to American values, would wrongfully abandon the many victims of the Islamic Republic, including hundreds of current political prisoners and detainees – and would also weaken deterrence against future abuses in Iran and make it more difficult for the Iranian people to free themselves from the Iranian regime. Iran has seen mass uprisings in 2018, 2019 and 2020; the system of government would have killed 1,500 protesters in November 2019 alone. The regime’s crackdown is likely cause even more mass uprisings in the future. If Washington lifts these sanctions, Iranian officials will have even less to worry about the personal price they might pay to crush further uprisings.

Lifting sanctions against these Iranian human rights violators will also strengthen these extremists in the broader Iranian political arena. Officials of the Islamic Republic who violate the law of Iran mandatory human rights obligations, including those arising from the International Covenant on Civil and Political Rights, to which Iran is a party Party— are among the most likely to violate Iran’s nuclear commitments. The United States should isolate and sanction them, not relieve them of sanctions pressure or otherwise rehabilitate them.

A move to lift human rights and terrorism sanctions against these Iranian officials would be inconsistent with policies previously expressed by the Biden and Obama administrations. For example, during his confirmation hearing, Under Secretary of Defense for Policy Colin Kahl noted that Washington “should not ease terrorism or human rights sanctions or anything else that curbs Iran’s destabilizing activities.”

In 2015, while discussing the very deal Biden officials say they want to resurrect, then-Secretary of State John Kerry Recount in the Senate that the United States would not violate the Joint Comprehensive Plan of Action (JCPOA) if Washington used “our authorities to impose sanctions on Iran for terrorism, human rights, missiles or any other non-nuclear reason”. Kerry also stated that “the JCPOA does not provide Iran with any U.S. sanctions relief under any of these authorities.”

The experience of the United States in negotiations with the Soviet Union, which had a much more advanced nuclear and military program than Iran today, demonstrates that it is not necessary to take the pressure off the perpetrators. of human rights violations to negotiate and implement verifiable arms control agreements. In fact, past efforts have shown it to be counterproductive.

Neither Carter, when negotiating the Strategic Arms Limitation Treaty (SALT II), nor Reagan, when negotiating the Intermediate-Range Nuclear Forces (INF) Treaty, made concessions on human rights. rights in order to achieve progress in arms control. Instead, Carter and Reagan made it clear to the Soviets that advances in human rights were essential to increasing confidence in arms control.

In June 1978 speech at the United States Naval Academy, Carter both discussed the importance of the ongoing SALT II negotiations and sharply criticized Soviet human rights abuses, stating, “The abuse of human rights fundamental human rights in their own country… earned them the condemnation of all those who love freedom. .” Even at the height of the SALT II negotiations, Carter publicly “condemned” and “deplored” a Soviet sentence against the dissident Anatoly Sharansky.

Carter and his Secretary of State, Cyrus Vance, used public and private forums to impress on Soviet leaders that continued human rights abuses would anger the American public and hamper the possibility of the Senate ratifying the completed SALT II treaty. Carter and Soviet President Leonid Brezhnev signed the SALT II treaty in June 1979. The Soviet invasion of Afghanistan ultimately derailed Senate ratification, but the United States and Soviet Union announcement they would nevertheless respect its provisions.

Reagan also negotiated and signed a major arms control agreement – ​​the INF Treaty – while heavily lobbying the Soviets on human rights. Reagan publicly called the Soviet Union an “evil empire”. Him and his administration under pressure the Soviets by bringing up human rights in meetings with them, emphasizing human rights in presidential speeches and discussing the issue openly with members of Congress, human rights activists man and Soviet dissidents.

After a summit with the Soviets, Reagan publicly declared that “we have not limited ourselves to arms reductions alone”. Instead, he also discussed the “violation of human rights” by the Soviets, noting that “a government that will break the faith with its own people cannot be trusted to keep the faith with the powers that be.” foreign”.

Reagan, like Carter, found it helpful to portray Congress as a “bad cop” on human rights issues. He underline to the Soviets that progress on other bilateral issues, given the human rights concerns of both his administration and congress, would be easier if Moscow improved its human rights record.

Congressional Action underline this point in Moscow. The House and Senate have passed numerous resolutions condemning Soviet human rights abuses, while individual lawmakers have criticized the administration when it even appears to vaguely subordinate human rights to arms control. .

Kenneth Adelman, Reagan’s top arms control adviser at the time, eloquently described the interplay between human rights and arms control in a January 1987 article speech. He argued that the defense of human rights is not an obstacle, but rather a contributor, to effective arms control agreements.

It’s no surprise, Adelman said, that “a nation that makes no effort to meet its human rights agreement commitments is also violating its arms control agreements.” Nor is it surprising, he added, that a nation “that systematically lies to its own people does not fully comply with an arms agreement it signs with us.” Adelman concluded that “openness and arms control go hand in hand”.

Thus, the lifting of human rights and anti-terrorism sanctions would actually reduce the prospects of a sustained and verifiable abandonment by Iran of its nuclear ambitions. It would also weaken deterrence against further abuse, abandon victims, empower Iranian extremists and send a dangerous message to Putin and his henchmen.

Just as it did with Carter and Reagan, Congress should act to ensure that the United States continues to end not only Iran’s nuclear program, but also its gross human rights abuses and State sponsorship of terrorism.

Orde F. Kittrie is a senior fellow at the Foundation for Defending Democracies and a professor of law at Arizona State University. He previously served as the US State Department’s senior nuclear counsel. FDD is a nonpartisan research institute based in Washington, DC, focused on national security and foreign policy. Follow him on Twitter @OrdeFK.