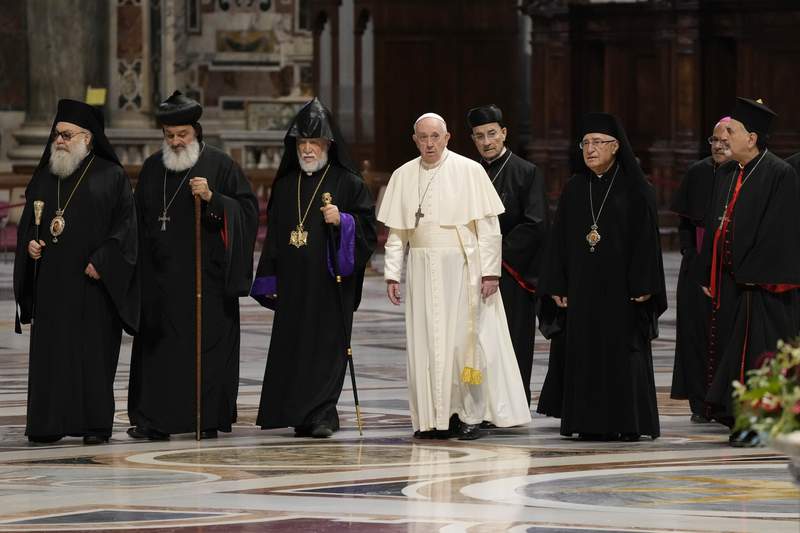 ROME – Pope Francis insisted on Thursday that Lebanon must remain a “land of tolerance and pluralism” as he welcomed the country’s Christian patriarchs to the Vatican to pray for an end to the economic and political crisis that has plunged the country into chaos and threatened its Christian community.

Francis presided over an evening prayer service in St. Peter’s Basilica with leaders of Christian churches in Lebanon, which included prayers and hymns in Arabic, Syriac, Armenian, and Chaldean. Members of the Lebanese community in Rome and of the diplomatic corps filled the benches.

During the service, Francis insisted that the vocation of Lebanon was to be an “oasis of fraternity where different religions and denominations meet, where different communities live together, putting the common good before their individual interests”.

“Lebanon cannot be left in the grip of events or (to) those who pursue their own interests unscrupulously,” he said. “It is a small but big country, but more so, it is a universal message of peace and brotherhood from the Middle East.”

The Mediterranean nation of 6 million people, including around 1 million refugees, has the largest percentage of Christians in the Middle East and is the only Arab country to have a Christian head of state. Christians make up a third of the population, and the Vatican fears that the country’s collapse is particularly dangerous for the continued presence of its Christian community, a bulwark for the church in the Middle East.

Lebanon is going through an unprecedented economic and financial collapse, coupled with an 11-month political stalemate over the formation of a new government. The developments pose the most serious threat to its stability since its civil war ended three decades ago. He is also trying to recover from the devastating explosion at the Port of Beirut last summer – and the coronavirus pandemic.

Francis invited the religious leaders for a day of prayer that began with a silent meditation at the tomb of the Apostle Peter and was followed by closed-door discussions on how to help Lebanon out of what the bank world has been described as possibly one of the worst crises the world has seen in the past 150 years.

In his concluding remarks at the ecumenical prayer service, Francis urged political leaders to find solutions and called on the international community to help the country recover.

â€œStop using Lebanon and the Middle East for external interests and profits! ” did he declare. “The Lebanese people must have the possibility of being the architects of a better future in their country, without undue interference”.

Ailing Prime Minister-designate Saad Hariri, who met Francis at the Vatican in April, said from Beirut that he hoped the meeting would call on all Lebanese to preserve their coexistence.

“It is not surprising that the pontiff keeps it in his heart through this invitation to 10 spiritual leaders with the aim of bringing Lebanon through its harsh reality”, he tweeted on Thursday, echoing the words of Saint John -Paul II that â€œLebanon is more than a country, it’s a message.

Vatican Foreign Minister Archbishop Paul Gallagher was blunt in explaining the Holy See’s “strong concern over the country’s collapse” during a briefing with reporters last week.

He said Francis invited religious leaders to Rome acknowledging that the Christian community had been hit particularly hard by the crisis, which sent the well-educated middle classes to flee power cuts, fuel shortages, soaring prices and now sporadic acts of violence.

The crisis, Gallagher said, “risks destroying the internal balance and Lebanon’s own reality, endangering the Christian presence in the Middle East.”

Noting the potential for Lebanon to fall into conflict, he said the country must be helped economically and keep the peace, saying it “remains the ultimate vanguard of an Arab democracy that welcomes, recognizes and coexists with a plurality of ethnic and religious communities which in other countries cannot live in peace.

“We must help maintain this unique identity, to ensure a pluralist, tolerant and diverse Middle East,” he said.

Francois said he hopes to visit Lebanon once a government is formed. Gallagher said if that happens soon, Francis could take a trip early next year.

Copyright 2021 The Associated Press. All rights reserved. This material may not be published, broadcast, rewritten or redistributed without permission.