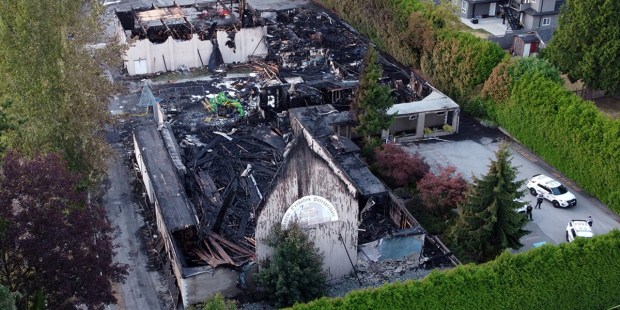 Canada has seen 45 Christian churches attacked in recent months, including 17 damaged or destroyed by fire.

A lay leader of a recently burnt down Canadian church has expressed the community’s forgiveness to the unknown arsonist. Drawing on his Christian faith, Steven Faltas spoke to officials in an interview with CBN News:

â€œThe only thing we can tell these writers is that as Christian believers we forgive you,â€ Faltas said. “Of course we would like our church to still be standing, but at the same time, we are strong believers, and although today is a day of mourning, God will provide, and tomorrow will be a day of joy.”

A heartbreaking scene awaited Faltas as he rushed to the scene of the blaze in the middle of the night. By 3:30 a.m. on July 19, 2021, the Coptic Orthodox Church of Saint George had already started to burn. Video footage taken by a neighbor of the church shows the building completely immolated at 4.30 a.m.

Faltas described what he saw:

â€œThe street was completely closed and there were about four or five fire engines all fighting the blaze,â€ Faltas recalls. “The scene was quite traumatic, surreal to be honest.”

The blaze is just one of a series of recent Canadian church fires that have been deemed “suspect” by authorities. This widespread destruction of church properties came as a result of reports from Indigenous Canadians that anonymous graves had been discovered on residential school properties. As John Burger reported for Aleteia, “The cemeteries were known to exist, but the news this spring and summer put the residential school controversy back in the spotlight.”

The apparent anonymous vendetta against the Catholic Church, however, spread to parishes on the outskirts. Some of the burned-down churches, such as St. George’s, are not Catholic and have no connection with residential schools. Faltas shared his frustration with CBN:

â€œIt is tragic that the churches are caught in the fires of a historically long and difficult process, a political process, which we, as an Orthodox community, do not have. [sic] been involved, â€Faltas said.

A separate CBN report cites 45 acts of vandalism against Canadian churches. Seventeen were damaged by fire or burnt down. The attacks shook Christian communities in 6 of the 10 Canadian provinces. Kurt Jacobs of the Calgary Police Department said:

â€œWhen a faith community is the target of vandalism or arson, it not only affects those directly affected, but leaves other members of the same faith in danger.

While the loss of important places of worship is devastating, there have been no deaths related to the fires. St. George’s hosts events to keep its congregation united. They recently held a vigil in front of the ruins of St. George’s, where they vowed to rebuild.

Read the full report on CBN.

Kerr: How we teach history is what is essential | Opinion