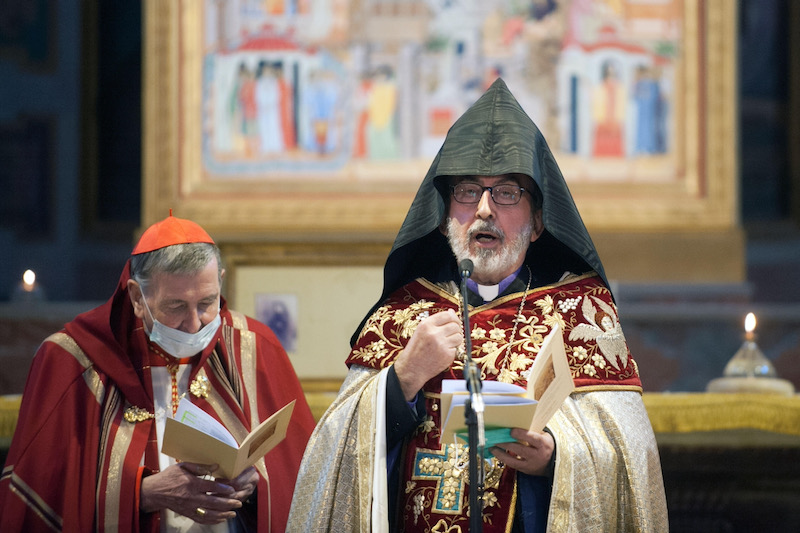 Koch says synod process must reach out to Orthodox

Cardinal Koch, pictured here at an ecumenical celebration for world peace in April, co-chaired by Archbishop Khajag Barsamian, representative of the Armenian Apostolic Church to the Holy See.

Close cooperation with the Orthodox Church, which has a long experience of synodality, will be crucial in the synodal process initiated by the Pope, said the president of the Council for the Promotion of Christian Unity, Cardinal Kurt Koch.

In his Apostolic Exhortation, Evangelii gaudium, Pope Francis “underlined that in our dialogue with the Orthodox, we Catholics have the enriching possibility of learning a little more about the meaning of episcopal collegiality and their experience of synodality”, recalled Koch in a commentary. interview with the German newspaper. Tagespost.

â€œThe Pope always reminds us that a synod is not a parliament. While a democratic process is primarily about determining majorities, synodality is a spiritual process aimed at determining what unites Christians in their faith, ways of life and community practice, â€Koch explained. â€œFor Pope Francis, synodality is also very closely linked to the participation of all the faithful in the evangelization of the world todayâ€.

Koch was convinced that the Orthodox Church’s long experience of synodality meant that it would have much to offer the Catholic Church as it embarked on its own synodal process.

Synodality was not just a new and additional problem to add to the many problems and challenges the Church faces today, Koch said. It was about renewing the Church by listening to one another and to the Holy Spirit. “Synodality is like putting on a new pair of glasses or seeing the faith and pressing issues of today with new eyes and hearing what the Holy Spirit has to say to us.”

This did not mean changing structures or institutions, he stressed. â€œThe essential requirements are silence and prayer. For centuries, the spiritual dimension has especially become visible in the celebration of the Eucharist and the enthronement of the Gospel Message. The deepest essence of a Synodal Church is the Eucharistic assembly.

This point of contact with Orthodoxy was of crucial importance. â€œThe fundamental principle of ecumenical dialogue is the exchange of gifts, in what we can learn from other churches – that is, in the belief that specific gifts of the Holy Spirit have not been given. only to the Christian Churches but to the whole of Christianity.

Already, in January of this year, Koch underlined that the Catholic Church “must recognize that it has not yet developed in its ecclesial structures the degree of synodality which would be possible and necessary”, and that “a credible link between the hierarchical and the synod – community principles would promote the advancement of ecumenical dialogue with orthodoxy â€.

While the issue of papal primacy has been a stumbling block in the Catholic-Orthodox dialogue, Koch has attempted to reverse the issue.

â€œThe deepening and strengthening of synodality is an important ecumenical contribution of the Catholic Church to the recognition of the primacy of the Bishop of Rome,â€ he argued. â€œThe theological and pastoral effort to form and live a Synodal Church therefore has an enriching effect on ecumenism, visible above all in Catholic-Orthodox dialogue – the central question of which is the relationship between synodality and primacy. That is why it is very desirable that our ecumenical partners be included in the world synodal process at all levels.