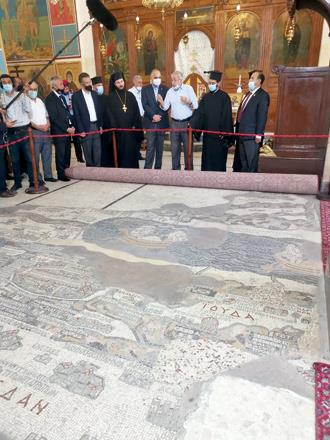 (MENAFN – Jordan Times) AMMAN – Prime Minister and Minister of Defense Bisher Al Khasawneh visited Madaba on Monday and checked the progress of work in a number of public facilities and departments in the governorate .

The Prime Minister stressed the importance of increasing tourism promotion programs at the local and international level, in particular that Madaba benefits from several tourist and religious sites.

Khasawneh began his tour, which is part of a field tour to several regions of the Kingdom following royal directives from His Majesty King Abdullah, with a visit to the youth city of Prince Hashim Bin Abdullah II, Jordanian news agency Petra reported.

The Prime Minister checked the facilities of the Youth City, which is considered a “sports monument” which helps to serve the sports and youth sectors and the local community of the governorate.

During the visit, the Prime Minister also stressed the importance of improving the living conditions of residents and of establishing adequate means of transport in the governorate.

The prime minister also visited the Madaba visitor center and listened to a briefing on the JD 2 million expansion project. Madaba tourism director Wael Janini said the governorate ranked second in 2019 after Petra in the number of tourists with more than 700,000 visitors.

Janini noted that after the Pope’s historic visit to Madaba in 2000 and the accreditation of five sites for Christian pilgrimage, the city is experiencing a growing participation of local and foreign tourists.

He also visited shops selling handicrafts and rugs, highlighting the importance of these industries in attracting tourists.

Khasawneh also visited the Madaba Institute of Mosaic Art and Restoration, which is the only institution in the Middle East to award a degree in mosaic art, and listened to a briefing on the institute which currently has 120 students and contributes to the maintenance of the historical and cultural heritage. heritage of the Kingdom.

During his visit to St George’s Greek Orthodox Church (Map Church), the Prime Minister met members of the church committee and pointed out that Jordanians, Muslims and Christians live side by side in brotherhood and l ‘love.

The church houses one of the most important maps in the world, which is the oldest original map of the holy land which is painted on a piece of mosaic dating back to AD 560.

The map, which shows the names of 350 cities in Jordan and Palestine, serves as a tourist guide for visitors to Palestine through the Christian Pilgrimage Route.

The Prime Minister also visited a new pharmaceutical factory created by the Sukhtian Pharma group in the district of Naur with an investment volume of JD 30 million. The Prime Minister underlined the government’s support for the pharmaceutical industries and underlined the importance of investing in the sector for its added value in the national economy and job creation.

Disclaimer: MENAFN provides the information “as is” without any warranty. We do not accept any responsibility for the accuracy, content, images, videos, licenses, completeness, legality or reliability of the information contained in this article. If you have any complaints or copyright issues related to this item, please contact the supplier above.