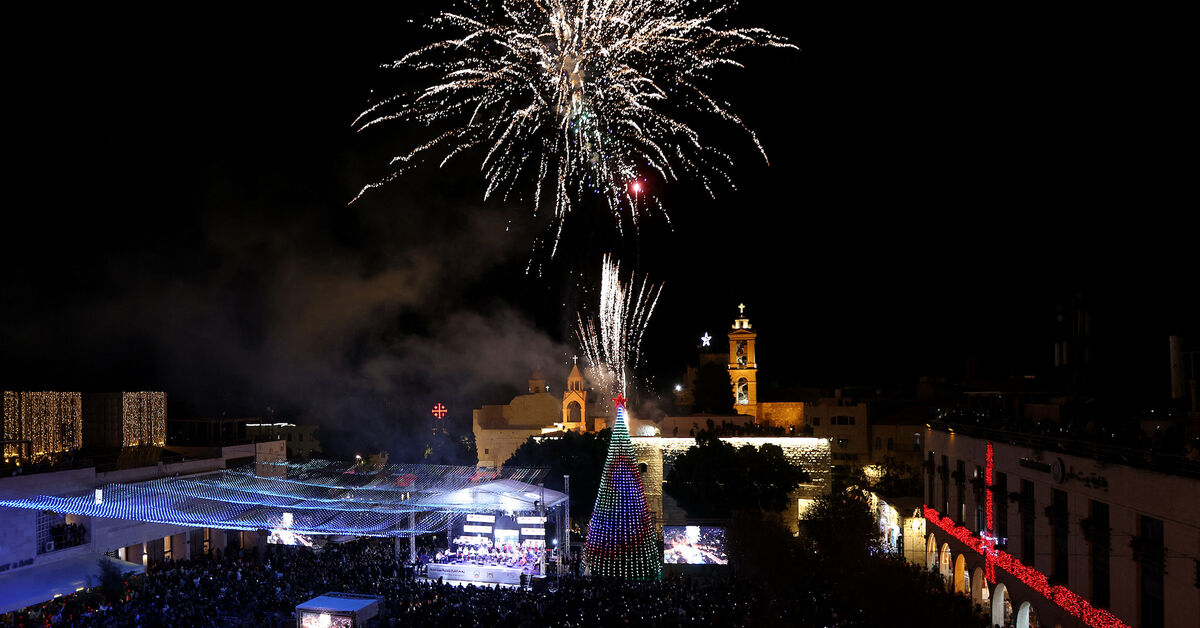 About 1,030 Christians live in Gaza, a small proportion of Gaza’s population of two million. Christians in Palestine celebrate Christmas according to the Western calendar on December 25, while Orthodox groups celebrate it on January 7.

The Church of the Nativity in Bethlehem attracts tens of thousands of Christians from all over the world on Christmas.

In 2019 and 2020, Israeli authorities prevented Christians in Gaza from making their usual Christmas trips to Bethlehem. In 2019, they allowed a limited number of people to travel outside Gaza but not to the West Bank.

In 2020, it completely banned Gazans from traveling during the coronavirus pandemic, closing the Erez crossing between the Gaza Strip and Israel in March 2020 for 18 months. However, it relaxed some travel restrictions in early August 2021 and thousands of permits were granted to residents of the Gaza Strip to work inside Israel as part of the Egyptian-brokered truce between the Hamas and Israel following the last fighting in May 2021.

Al-Monitor tried to contact Hamas to ask if these Israeli incitement was part of the truce deal, but no response was received.

Kamel Ayad, public relations director of the Orthodox Church in the Gaza Strip, told Al-Monitor that after a two-year ban, the Church is optimistic that Israel will allow Christians to issue certificates. allowed to celebrate Christmas in Bethlehem.

Avad said the church was awaiting an Israeli response to the 723 permit applications.

He explained that Israel carries out a security check on all permit applicants and may reject half or most of them for undefined security reasons. He can license a 10-year-old girl and refuse the rest of her family, a mistake he considers intentional. Although many Christians in Gaza wish to make the pilgrimage, many children and the elderly are unable to travel, and some potential applicants do not have the vaccines required by Israel to obtain a permit.

He said that due to the coronavirus pandemic, celebrations in the Gaza Strip will be limited to prayers in church and lighting the Christmas tree. The church used to hold parties with traditional Palestinian songs and distribute Christmas gifts to Santa’s children.

He said that before the Palestinian division in 2005, the church used to light a huge Christmas tree in the Garden of the Unknown Soldier in central Gaza City and a group of young people called the Orthodox Boy Scouts were organizing parades.

Last year, the Hamas-run ministry of endowments in the Gaza Strip issued a circular in mid-December discouraging Muslims from participating in Christmas celebrations in the Gaza Strip. Ayad explained that nonetheless, all of his Muslim neighbors and friends celebrated with him.

“It is simply unthinkable that my Muslim neighbors wish me good luck on such a great occasion. We are all here as one community and we reject discrimination, ”he added.

He said that the brotherhood between Muslims and Christians in the Gaza Strip dates back thousands of years and that no such directive can change that. The government was quick to back down but even if it hadn’t, he said, the circular would never have been respected.

Riad, a pseudonym, does not consider Israel’s issuance of permits to half of Gaza’s Christians to be successful. He thinks Israel is only trying to promote itself as a humanitarian country that upholds moral values.

“All Palestinians have the right to travel and perform their religious rituals without any hindrance,” Riyadh, who requested a permit and is awaiting a response, told Al-Monitor.

Issa, another pseudonym, disagreed, telling Al-Monitor that he rejected the idea of ​​allowing an occupying country to visit a Palestinian city because the Oslo Accords guaranteed the right of movement of people. Palestinians between Palestinian governorates.

Issa said he had other security reasons preventing him from submitting a permit application but did not want to discuss them. He said, “The right to worship is protected by law. How can Israel prevent it? Should we thank him for allowing some of us to pray where Christ was born?

He said Christmas in Gaza seems incomplete now that so many Christians are gone and extended families cannot be together.

Issa explained that the migration of Christians from the Gaza Strip to the West Bank and Jerusalem is motivated by their quest for freedom and a better future. He said: “The right to freedom of worship is guaranteed in the Gaza Strip, but the right to dress, drink and be open-minded is obviously not.

He also said the Gaza Endowment Ministry circular banning Muslims from participating in their celebrations angered the Christian community.

“This fatwa hurt us, but we kept going,” Issa said.

An opinion poll conducted last year by the Palestinian Center for Policy and Survey Research found that a higher proportion of Christians want to emigrate than among their Muslim peers.

in mexico, mo finances the financing of financial loans developed for dismal credit interest amounts from banking institutions that generate