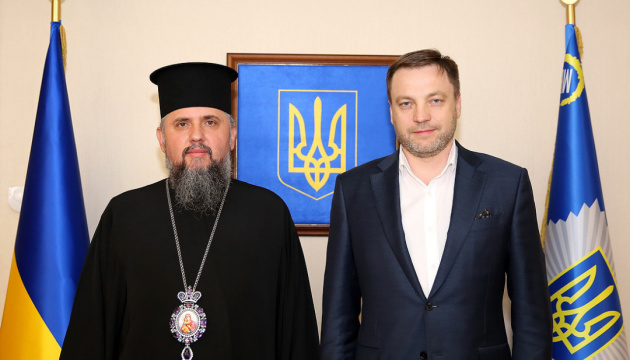 This is according to the press service of the ministry, reports Ukrinform.

During the meeting with the leaders of the two largest Orthodox denominations in Ukraine, the minister discussed the issue of constructive relations between church and government, as well as the need to ensure interfaith peace, law and order.

Separately, the parties discussed in detail the security measures during the mass processions held on July 27 and 28, marking the national holiday, the day of the baptism of Kyivan Rus-Ukraine.

Monastyrsky assured church leaders that law enforcement is ready to resolutely counter all possible provocative acts during festive events, including in and around temples and other places of worship.

The minister called on the OCU and UOC leaders to remain balanced and take special responsibility during mass events, expressing the hope for cooperation in this regard and future constructive dialogue.

According to Ukrinform, on July 27, the National Guard and the police stepped up security measures in central Kiev due to the holding of mass events dedicated to the 1033rd anniversary of the baptism of Kyivan Rus-Ukraine.

Subsequently, Onufriy, the head of the religious organization, who participated in the unification council, reneged on his commitments to recognize the newly created independent church alongside Russian clerics who accused Patriarch Bartholomew of abusing of power and to create a schism among the Ukrainian faithful.

The process of recognition of the OCU by other local Orthodox churches around the world is ongoing, as Russian clergy have vigorously opposed the developments and rallied affiliated churches to hamper them.

The Moscow Patriarchate in Ukraine has also spoken out against the government’s decision to force the name change of religious organizations to reveal in their official title the real centers of decision, which would imply that the UOC of Onufriy is would title â€œRussian Orthodox Church in Ukraineâ€.

What are USDA loans and am i eligible for a loan?