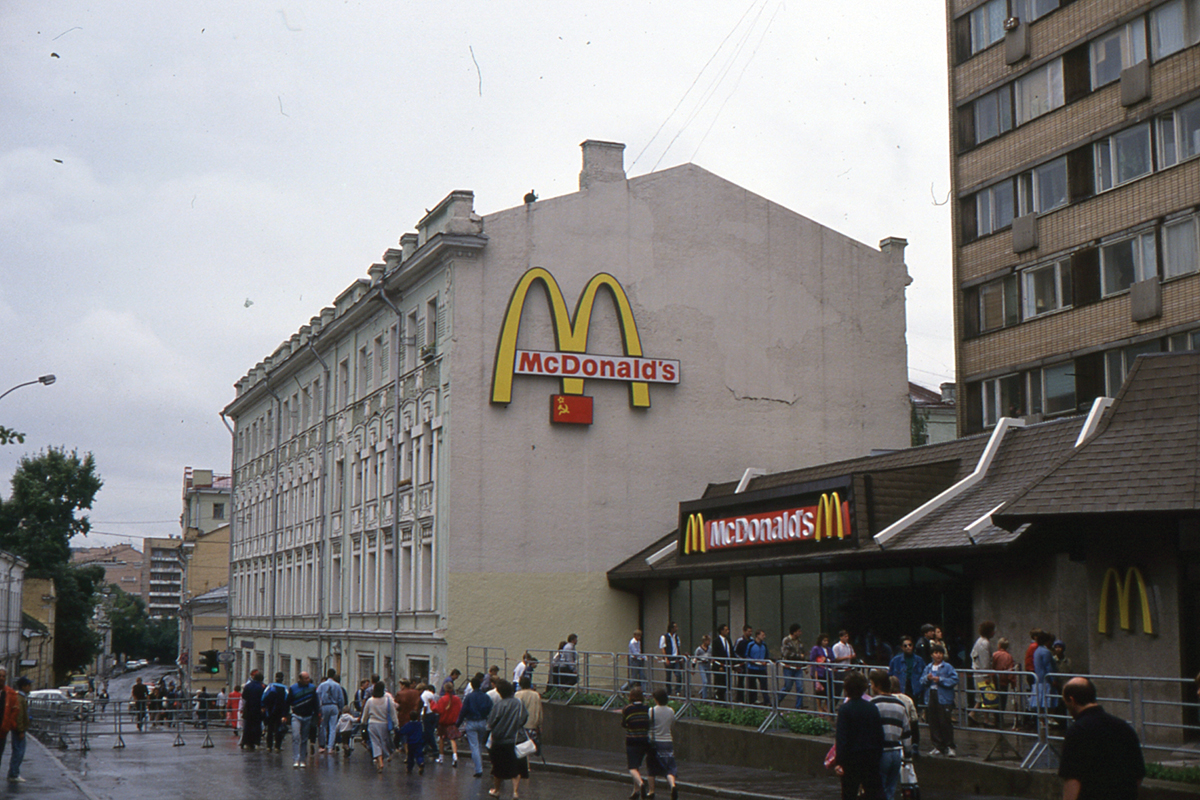 In 1991, when I was a student in Russia, the newly opened McDonald’s in Moscow served as a symbol, a tourist attraction, and the only place – and I mean the only one – with clean public restrooms. The very idea of ​​clean public toilets was foreign in Russia at that time. We marveled when our Russian friends took us on long excursions and never needed to use the toilet. It just seemed miraculous, and we worked on training our bladders so we didn’t have to use the bathroom either.

But during our time in Moscow, the fresh, bright, clean McDonald’s was a respite and a beacon. The lines were legendary. Rumor has it it could take hours to walk in and order a burger. But the bathroom: now there was capitalism I could get on board with.

Back home in the US, I have never been to a McDonald’s. I found the food mediocre and the atmosphere ridiculous. McDonald’s represented what my 19 year old self considered the worst of American culture. Even as I stood in line at McDonald’s in Moscow, waiting for the Soviet Union to finish collapsing, I considered McDonald’s itself to be potentially responsible for the downfall of Western civilization.

My Russian companions, Vadim and Masha, loved the new McDonald’s. They also loved Goldie Hawn, Steve Martin and jazz. They wanted ordinary things in their lives: decent living conditions, space to raise their children and access to cultural goods. Looking at the cultural ruin around them, they applied to move to the United States and become citizens.

When Vadim, Masha and I went to McDonald’s, we only stood in line for ten minutes and thought the crispy, greasy fries tasted like heaven. They tasted like home.

It is a common experience for tourists. When you’re away from home, things at home suddenly feel sweeter and more meaningful. But McDonald’s was not the equivalent of my grandmother’s chocolate chip cookies. McDonald’s was a symbol of something far greater than such personal nostalgia: the Cold War, and which side ostensibly won it.

I was also a symbol, as an American in Russia a few months before the official end of the Soviet Union. Wherever we American students went, our civilization compared favorably to theirs. We Americans had better shoes. Our currency had more value. We could go grocery shopping in hard currency and buy foreign-made cookies and candy. We were the victors in a battle that had lasted all of our lives and for much of the lives of our parents and grandparents. This victory had its most dominant symbol in McDonald’s in Moscow.

At McDonald’s in Moscow, I found sparkling signs of capitalism and surprisingly clean restrooms.

When the Soviet Union collapsed after decades of isolation and repression, the United States had an incredible opportunity. We could have recognized the moment of building democracy in Russia, a place that had no tradition for it, as a moment that demanded our sincere efforts and support. After World War II, the United States launched an ambitious plan for the economic and political reconstruction of Japan and Germany. The main drivers of the Marshall Plan were economic – and Americans came to believe that opening up markets, in itself, fostered democracy. In Russia, this did not turn out to be true. Americans made the mistake of equating McDonald’s with freedom, and Russians made the mistake of equating democracy with the chaos that quickly consumed their country in the 1990s.

In 1991, the temptation to jubilate among the American students of my cohort was great. One day, when the ruble was collapsing, an American student burned a hundred-ruble note, the equivalent of someone’s monthly salary. He did it because he could, because it made him feel good to see that the Russian currency was worth nothing to him.

When I heard last month that McDonald’s was temporarily closing its doors in Russia in response to President Vladimir Putin’s invasion of Ukraine, that student’s act was one of the first things I thought, with the clean bathrooms and that sparkling sense of capitalism incoherently attached to freedom and democracy. At the time, it seemed like the worst of American culture had somehow won against the worst of Russian culture, but it didn’t really feel like a victory.

Right now I see more meaning in the fight against Russian authoritarianism. But I also see a cautionary tale in this McDonald’s. Regardless of the degree to which Americans continue to confuse capitalism with democracy, we seem to be nurturing the forces of authoritarianism that are determined, like Putin, to prove that prosperity does in fact depend on an authoritarian order.

The problem that was easy to observe in 1991 is very close to a problem that we have now: how should Americans morally orient themselves vis-à-vis Russia and Russians. The mistake we have made time and time again is to position ourselves as the morally superior players simply because of our better economic position. It is a kind of prosperity gospel that works at the highest levels of our economy and our government. We are blessed because we are rich. We are rich because we are blessed.

It causes us to fail again and again to examine how our moral failures have shaped the world in which Putin operates. We could point in many directions: our own wars fought in violation of international law, our willingness to look the other way when Putin and Bashar al-Assad destroyed Syria to save it, our environmental record and its relationships with companies such as McDonald’s, our failure to support nascent democratic efforts in Russia even in the name of capitalist expansion. We helped create the conditions in which Putin saw an opportunity to impose a new reality on the ground.

Before going to Russia in 1991, I attended several conferences designed to prepare me for what I was going to find there. These conferences promoted American superiority and repeated Cold War phrases like “the free world.” They regularly confused capitalism with democracy. Thirty years later, I hear those same strains all around me.

Don’t get me wrong: I want the United States to act on behalf of Ukraine. I lived there right after the Orange Revolution in 2004. I encouraged my friend Alya as she took part in the Maidan Revolution in 2014. I was impressed with what she and others achieved. Ukrainians’ desire for democracy is real and alive and worth defending – and I believe, as Ukrainian President Volodymyr Zelensky has said many times, that Ukrainians are fighting on our behalf.

I am as perplexed as anyone as to what we should do about it, how to really help this fragile democracy find the foundations on which it can rest. But I know we did no good in 1991 when we bragged and bullied a new Russia trying to find its way. Where there could have been a Marshall Plan, there was a McDonald’s. He never really served as a substitute.

A version of this article appears in the print edition as “Fast food is not freedom”.