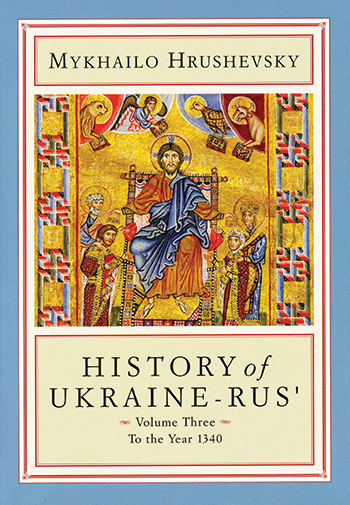 EDMONTON-TORONTO – The Peter Jacyk Center for Ukrainian Historical Research at the Canadian Institute of Ukrainian Studies, University of Alberta, and CIUS Press announced the publication of a new volume of “History of Ukraine-Rus” by Mykhailo Hrushevsky. The new volume 3 in English, like the eight previously published volumes (between 1997 and 2014), was prepared by the Hrushevsky translation project of the Jacyk Center. With its release in 2016, volume 3, subtitled “Towards the year 1340”, also marks the 150th anniversary of Hrushevsky’s birth.

Hrushevsky characterized his multi-volume â€œHistory of Ukraine-Rusâ€ as the history of the existence of the Ukrainian people from the earliest times to the modern era. In volume 3 he deals with one of the lesser known but most intriguing periods of this history – the time of the preeminence of the Galician-Volhynian state and the spread of Tatar (Mongol) rule over the Ukrainian lands. In this volume, the master historian also offers a comprehensive discussion of the political, social and cultural life of the period of Old Russia, during the flourishing of the princely state centered in Kiev.

Hrushevsky represents the Galician-Volhynian state as the Western successor of Kyivan Old Rus’. It describes the formation of the Galician-Volhynian state and the dynastic circumstances which subsequently led to its decline. One of them centers on Danylo Romanovych, the eminent ruler who played a major role in Central and Eastern European affairs and received a crown from the Pope. Danylo succeeded in uniting the lands of Volyn and extended his rule over the principality of Halych (Galicia), protecting his state against the Tatars while seeking support from the West.

In this volume, Hrushevsky also describes the situation in the Dnipro lands after the Tatar invasion. Turning to an examination of life on Ukrainian lands throughout the period of ancient Russia, Hrushevsky discusses the political, military and judicial systems, religious life, artistic and literary achievements, economic issues, social structure and everyday life of ordinary people. Throughout his narrative, Hrushevsky demonstrates erudition and mastery of the sources for which he is renowned.

The English-language volume includes introductions addressing its content and continuing scientific significance by Svitlana Pankova, director of the Hrushevsky Museum in Kiev, and Volodymyr Aleksandrovych, historian at the Krypiakevych Institute for Ukrainian Studies in Lviv, as well as an accompanying essay on of literature. and Education in Old Rus’ by Robert Romanchuk of Florida State University.

The volume also includes a newly compiled bibliography of all works cited by Hrushevsky, four maps with accompanying notes, and a genealogical table with explanatory note.

Work on the English edition of ‘History of Ukraine-Rus’ is supported by the foundation established by the late Peter Jacyk of Toronto, founder of the Jacyk Center, and the Petro Jacyk Educational Foundation, headed by Nadia Jacyk. The preparation of the new volume received financial support from the Shevchenko Scientific Society Inc., USA, which, already in the 1950s, proposed the translation of Hrushevsky’s “History” into English as essential to the development of the Ukrainian scholarship. Edward Brodacky’s estate of London, England made a generous donation for the publication of the volume, and the Toronto-based BCU Foundation provided funds for printing and distribution.

Volume 3 was translated by the late Bohdan StrumiÅ„ski, eminent philologist and associate of the Ukrainian Research Institute at Harvard University. Dr StrumiÅ„ski also translated Volume 7 (published in 1999) and Volume 9, Book 1 (2005).

The consulting editors for Volume 3 were Yaroslav Fedoruk of the Kyiv Institute of Archeography and Source Studies and Robert Romanchuk of Florida State University. The volume was edited by Frank E. Sysyn, director of the Jacyk Center and editor-in-chief of the Hrushevsky Translation Project, assisted by editor-in-chief Uliana M. Pasicznyk. Marta Horban-Carynnyk also edited the text.

The book launch of the new volume took place in Toronto on November 13, 2016. Like all volumes of â€œHistory of Ukraine-Rusâ€, volume 3 can be purchased through CIUS Press’s secure online ordering system at www. ciuspress. com or by contacting CIUS Press by email, [email protected], or by phone, 780-492-2972. Volume is priced at $ 119.95 (plus taxes and shipping; outside of Canada, prices are in US dollars). The entire 12-volume â€œstoryâ€ is available for a subscription price of $ 1,100.