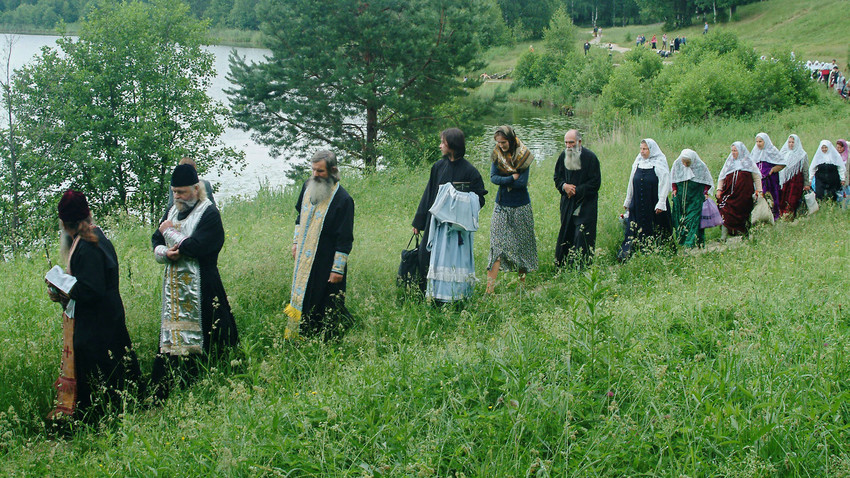 What distinguishes the old and the new religion remains a subject of controversy to this day. Shallow features (how many fingers to cross, how to bow, how many “hallelujahs” to say) are often cited as the main differences between Ordinary Orthodox and Old Believers (Russian: staroobtyatsy, literally “old ritualists”). But the schism has deeper roots. Half a century ago, the Russian Orthodox Church finally recognized the Old Believers and today advocates reunification with them. But in the 17th century, Patriarch Nikon’s top-down reform of the Church sent shockwaves through society, the echoes of which still reverberate today.

â€œIt was then that the apostate Nikon established the faith and the laws of the Church,â€ wrote the first Russian Old Believer, Archpriest Avvakum. Nikon’s faith reforms marked the start of a major split in the Russian Orthodox Church. Corn First of all.

Patriarch Nikon with the clergy

Nikon was born in the Nizhny Novgorod region. Before becoming a Patriarch, he was a priest, got married and started a family. But when his children died, he entered a monastery out of grief, of which he later became the abbot. It was customary for the newly appointed abbots to be taken before the Tsar to bow down to him, which Nikon duly did. He managed to make a good impression on the then ruler, Alexei Mikhailovich, the second tsar of the Romanov dynasty. Eager to get closer to Nikon, the Tsar appointed him to a high post in a Moscow monastery.

Alexei Mikhailovich even accepted Nikon in the circle of the the so-called “fanatics of piety”, who proclaimed themselves “in love with God”. Their aim was to raise the standard of morality both among the clergy and ordinary people. The circle held regular meetings, and Nikon often communicated with the Tsar.

In 1652, following the death of Patriarch Joseph, Alexei Mikhailovich proposed Nikon as his successor. Having obtained the Czar’s promise not to interfere in Church affairs, Nikon undertakes his reforms.

What has Nikon reformed?

One of Nikon’s biggest concerns were church books. While still a monk, he served in various churches across Russia, and the sacred texts everywhere have been translated and interpreted in different ways. Nikon’s goal was to unify them. He was inspired by the Greek sacred texts of Byzantium, since it was from there that Russia adopted orthodoxy.

Thus, the amendment of Scripture formed the basis of the reforms. Many corrections have been made, for example, the Russian spelling of “Jesus” has been changed from the addition of a letter (Iisus in the place of Isus).

2. The service order has also undergone changes. One of the most important and controversial was the introduction of the sign of the cross with three fingers, instead of two. In addition, prostrations have been replaced with bows at the waist.

3. The festive procession of the Cross with icons around the church now had to go in the opposite direction, anti-sun.

4. “Hallelujah” was to be spoken three times during the service instead of two.

5. The amount of holy bread has also changed. Now instead of seven prosphora (small loaves of sourdough bread), only five were used during the liturgy.

Many high-ranking clergymen were unhappy with the reform. In response, the Tsar called an assembly that went down in history as the Moscow Synod of 1654. However, only the question of changing the Scriptures was resolved. Nikon continued to put its reforms into practice, securing the support of the Tsar. Those who resisted were called schismatics, and later Old Believers.

Another large clergy assembly – the Grand Synod of Moscow of 1666-1667, which even Patriarch Paisius of Constantinople attended – decreed that schismatics were rebels and should be punished.

Many Old Believers were exiled to Siberia, including the aforementioned Archpriest Avvakum. He was the leader of the Old Believer movement and an active opponent of reforms. It was only the tsar’s intervention that saved him from a worse punishment.

Avvakum Mark Nikon a heretic and an apostate. He also criticized him for the plague epidemic of 1654-1655, which he believed God had given as a punishment for Nikon Sins.

The persecution of the Old Believers was ruthless: priests who preached against Nikon risked having their tongues cut off. Later, Avvakum was also arrested and executed – burned alive in a hut with other Old Believers. This act led to a wave of self-immolations among Old Believers in protest (read more here).

Museum of the History of Religions, St. Petersburg, Russia

Influential secular Old Believers have also been arrested. Such a scene is depicted in the famous painting by Vasily Surikov Boyarynya Morozova, in which a woman from boyar the nobility are dragged into chains, but do not repent of their faith, defiantly crossing each other with two fingers.

Sometimes even whole monasteries resisted the reforms. The longest position was taken by the Solovetsky Monastery – when the Tsarist troops came to seize its property, the monks greeted it with steel. For eight years, 1668-1676, the monastery was effectively besieged.

Sergei Miloradovich. Uprising of the Solovetsky monastery in 1666

Most of the atrocities took place after Nikon retired. His relations with the Tsar had gradually deteriorated (in particular, Nikon opposed the transfer of monastic lands, and the considerable revenues which flowed from it, to the public treasury). Among the Old Believers there were many influential people who turned the Tsar against the Patriarch. It is said that Nikon himself showed pride and, according to historians, tried to put the Church above the State.

A century later, Catherine the Great castigated Nikon, accusing him of having wanted to become Orthodox pope and enslave the Tsar. “The sign of the three-fingered cross was imposed on us by the Greeks through imprecations, torture and death sentences,” she said.

As a result, Nikon left Moscow and took refuge in his own personal stronghold, the New Jerusalem Monastery on the Istra River, which he had built in the image and likeness of the holy places of Jerusalem. The Tsar was unhappy, and at that same great Moscow Synod of 1666-1667, Nikon was tried in absentia.

He was convicted of various crimes and stripped of all his ministries. As a simple monk, he was confined to the Ferapontov and (later) Kirillo-Belozersky monasteries in northern Russia, where conditions were nothing if not austere. After the death of Tsar Alexei Mikhailovich, the sick and decrepit Nikon was allowed to return to the New Jerusalem monastery, but died on the way before reaching his personal ordeal.

If you use all or part of the content from Russia Beyond, always provide an active hyperlink to the original content.