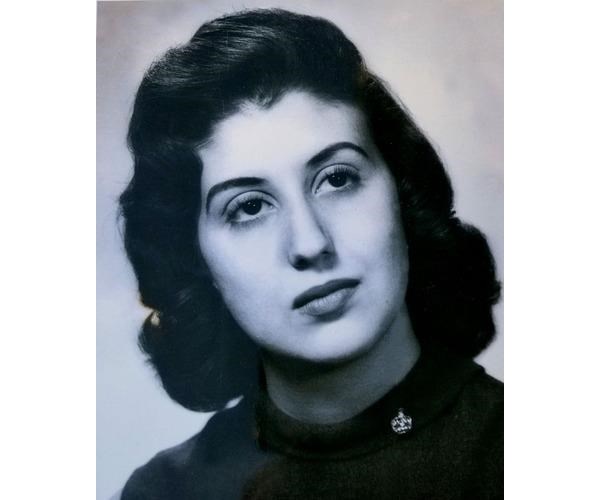 Salt Lake City, UT—Helen Kouris Dikeou left this world to be with the Lord on February 1, 2022, as one of the most faithful witnesses of God’s light on this earth was tragically extinguished,… a few years earlier than she had hoped.

Born February 2, 1937, to Gust A. and Melva Georgelas Kouris in Carbon County, Utah, Helen was the 2nd of 4 daughters raised in Salt Lake City, along with her three feisty sisters, Charlene, Mary and Theano.

A gigantic extended family and many members of the nearby Greek community lived within walking distance of her family home and Helen’s life was filled with people, parea and social gatherings from a young age. It was the foundation of the outgoing, friendly and very social person Helen became, which continued throughout her life.

Hélène loved people! On her 60th birthday, she found it nearly impossible to limit her celebration to just 200 close friends and family. Such was the nature of Helen Dikeou. Her engaging personality, her love of God and her love for her neighbor made her a loyal, honest, compassionate and dear friend to many. She made friends easily and everywhere, young or old, rich or poor, and people from all walks of life. She never missed an opportunity to visit, chat or break bread with others.

Helen brought many people to know God, it was her calling and she never lost her faith in any situation. With circumstances big and small, Helen brought it all to God in prayer and taught her children to do the same.

She was a loving mother and sister, a dedicated Sunday School teacher, a trusted and loyal employee, a sports enthusiast, passionate about her Denver Bronco’s and Utah Utes, and a life member of the Greek Orthodox Church, both in Salt Lake City. and Denver.

Helen graduated from South High School in 1955 and was the first member of her family to attend college. There she joined the Alpha Delta Pi Sorority and graduated from the University of Utah in 1960.

As a young adult, she was very active, singing in the church choir, playing women’s basketball, and regularly traveling with large groups of friends to other western cities for choir conventions and parties. basketball tournaments. She served on organizing committees and helped write the newsletter for Western Choir Federation conferences and a Rocky Mtn area basketball tournament in 1957.

It was during these years that she met her future husband, Jim Dikeou. They married in 1960 and Helen moved to Denver where Jim grew up. In Denver, she worked for United Airlines and taught elementary school before having two children, Elayna and Ted. Their young family was extremely active with other couples from the church who all raised their children together and had a lot of fun as a group! An early morning “come as you are” surprise party is just one of many that come to mind. Helen developed many close and lasting friendships during her time in Denver. Many called those years the best of his life.

In the 1960s, Helen served as president of a national Greek Orthodox congress of clergy and laity. It was an important role for her and she turned her house into a kind of headquarters to plan the event.

In 1975, she returned to Salt Lake with her children after the divorce. She went to work for the University of Utah and remained there until her retirement. Through her work at the University, Helen became close to many of the students she mentored during their college years. She was promoted several times and eventually headed the university’s veterans office.

Helen was always ready to play cards and loved to play board games. Blessed with a quick wit and an encyclopedic mind, she enjoyed doing crossword puzzles and excelled at every pun known to man. She was an avid reader and sometimes read 6 books in a week. She also loved animals and they loved her, she gave each animal snitches from her plate of food.

For more than 50 years, her Salt Lake and Denver women’s groups met monthly for Friday dinners, where the conversations and laughter continued late into the night. Many don’t know about Helen’s matchmaking skills. She has successfully matched many couples in her very large circle. Dozens of large families owe their beginnings to Helen’s idea and the alignment of people. Although she didn’t complain, she must surely be sad that she hadn’t had the joy of having her own grandchildren.

Although not known to be physically active in her later years, Helen’s spirit never rested. She was reading or writing, calling such and such a person, or planning her next social gathering. She followed what was happening with everyone she knew, as well as news, politics and world events until she was injured in her final months. Even last spring, she still remembered every person who had played a role in her life, knew who was related to whom, who lived where, who did what, who had married, who was sick and who had recently died. …And, as always, her concern for others always outweighed what she was going through herself.

The many people she taught and brought to know God will continue in her footsteps. We know we will see her again when we are all gathered in the presence of our Savior, Jesus Christ.

She was predeceased by her son, Ted (Theodore) J. Dikeou whose life was tragically cut short in 1990… This was devastating to Helen and broke her heart; Also, by his parents; his sister Charlene (Tom) Polychronis; Gaylen Robbins; nephews, Kyle Polychronis & Sammy Soter; and many very close aunts, uncles, cousins ​​and koumbari.

Funeral services and a visitation will be held at St. Anne and Prophet Elias Greek Orthodox Churches.

Interment at Mount Olivet Cemetery followed by a late lunch and makaria at the home of Prophet Elias. Everyone who knew Helen is invited.

Masks are requested as well as social distancing to protect the vulnerable family. In lieu of flowers, please make a donation in Helen’s memory to the St. Anna or Prophet Elias Greek Orthodox Churches in Salt Lake City or the Cathedral of the Assumption in Denver, CO. The funeral services will be streamed live on the St. Anna YouTube channel: https://www.youtube.com/channel/UC8PbdstnLVq-relVOb3GiwA.

The lessons of Helen’s death are many. Some can learn from them, others cannot.

MAY HIS MEMORY BE ETERNAL! I love you mom!

With war looming, will Kiev have a Catholic patriarch?