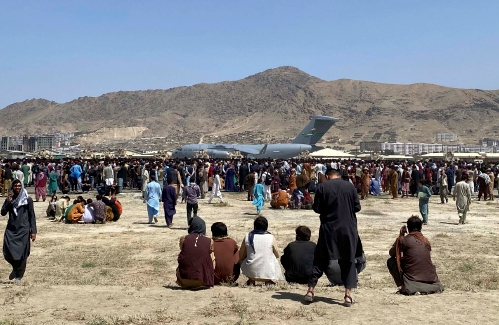 Hard to get out of

For decades, I have exhibited on my shelves two minor pieces of Gandhara sculpture, a stylized head of Buddha and a fragment of a stone frieze, an art form that developed in the northern region. -western Pakistan and eastern Afghanistan between the 1st century BCE and the 7th century. WHAT I bought in Peshawar, Pakistan. The art, which was described to me by the bazaar merchant I bought them from, is what emerged when Alexander the Great met Gautama Buddha.

Today, struggling to understand the enormity of what Afghanistan is going through, what America is inflicting on us and the world, I offer a reflection and a lament, a fear for the survival of the families I know. in Kabul.

After the arrival of Alexander the Great in Afghanistan in 330 BCE. The powerful Macedonian faced such strong resistance from the Afghans that he reportedly declared Afghanistan “easy to enter, hard to leave”.

America today is in trouble. After making the right decision to leave Afghanistan, President Biden’s administration, in a stunning display of corrupt intelligence, incompetence, ignorance and indecision, spoiled the withdrawal and put in thousands of Americans and Afghans and their families in danger of capture and death.

Millennial lessons of the madness of pride, unfortunately, that the United States, ignoring the lessons of Alexander, Genghis Khan, the British and the Russians, are suffering today and inflicting on their allies.

In 1980, a year after the unfortunate invasion of Afghanistan by the USSR, author Peter Hopkirk wrote Foreign devils on the Silk Road. A fascinating read, he wrote about the fervor and rapacious appetites of 19th-century Western archaeologists who competed to strip Asia of its ancient artifacts and install the priceless loot as trophies in the great museums of the Imperial West.

Today, alien demons at opposite ends of the Silk Road, which in its heyday connected Beijing to Rome, haunt and compete across Central Asia either for manuscripts, gold, jade, and Gandharan art, but for rare earth minerals, opium, power and security.

The Silk Road and its alleys, crossed by Ibn Battuta and Marco Polo, were a world Broadway. Along it traveled intellectuals and musicians, Christians, Muslims, Buddhists, traders and cargoes of silk and gold, beggars and warlords.

Land that was once vital, once neglected, now critical. These are lands America plunged into after September 11, 2001.

These are the lands we cohabit in 2021, twenty years after President George W. Bush launched a just war against Al Qaeda in Afghanistan following his September 11 terrorist attack. A just war that most Americans supported, a just war from which we quickly lost our way.

A war that has miserably led America astray, led astray towards black sites, torture, extraordinary renditions, Guantanamo and a flawed Patriot Act. A war that has become tragic, leading to an unjust war of choice in Iraq and the loss of blood and treasures shed by American warriors in the service of their nation.

Bush, who started the war, never fully understood the mission, mistakenly believed: “The men and women of Afghanistan are building a free and proud nation, and fighting terrorism – and America is honored to be. ‘be their friend.

We are not Afghanistan’s friend. Nations have no friends, they have interests. In fact, as Bush’s Under-Secretary of Defense Paul Wolfowitz put it: â€œWe did not go to war in Afghanistan or Iraq to, I quote, ‘impose democracy’. We went to war in both places because we saw these regimes as a threat to the United States. ”

We are not Afghanistan’s friend and after 20 years of such American pride, Afghanistan is neither free nor democratic.

President Biden was right to insist that it was time for US forces to leave Afghanistan after a 20-year war that had also plagued four Presidents, two Republicans and two Democrats, failing to secure the nation.

Biden was wrong about how he chose to do it.

During my lifetime, not only has America suffered defeats and ignominious withdrawals (Bay of Pigs, Vietnam, Marine barracks in Beirut, American hostages in Tehran and the American withdrawal from Iraq in 2011), but we have several occasions failed to demand full liability. for these failures.

Failures that we recognize today have led us to disorder and defeat in one of the world’s poorest countries by a motley Taliban devoid of both air power and sophisticated weapons.

Today, our failure to learn the lessons of history, recognize the signs of impending defeat and prepare for it has not only left NATO and the Afghan allies disillusioned and abandoned, but has revealed critical flaws in America’s intelligence capability which I fear leaves us isolated and possibly vulnerable to more sophisticated transnational attacks.

How can so many people risk so much, know so little, I wonder. The superficiality of the Biden administration’s capricious approach is lacking foresight, lacking in empathy for those we abandon, despising our Afghan allies and their families and the sacrifices they have made at our behest.

The pride of the Biden administration has it all wrong and today, as I struggle, so far unsuccessfully, to try to help a vulnerable Afghan family escape Kabul, I cannot believe how parochial, incompetent and disconnected our dishonorable surrender has been.

“May God take you away from the poison of the cobra”, Alexander the Great would have said, “from the teeth of the tiger and the vengeance of the Afghans”.

Last Sunday, as the smoke of burning files rose from our embassy, â€‹â€‹as Old Glory was lowered, folded and protected, the Taliban’s vengeance, riding the legendary Silk Road, was complete.

This week, as we watch Americans flee Afghanistan, reflecting the withdrawal of Soviet troops across the Friendship Bridge from Afghanistan to the Soviet Union in February 1989, we can only conclude that the two powers have come together. withdrawn as losers, vulnerable to cobra venom.

This week, as I pray for the survival of my friends in Kabul, pray for the survival of our troops, translators and their families and other targeted Afghans as I mourn a world where pride trumps humility and humanity I will keep a Take a look at the art on my shelves and remember that sometimes, due to conflict, opposites can be drawn. That beauty and art can triumph.

(Robert Azzi is a photographer and writer who lives in Exeter. His reviews are archived at theotherazzi.wordpress.com.