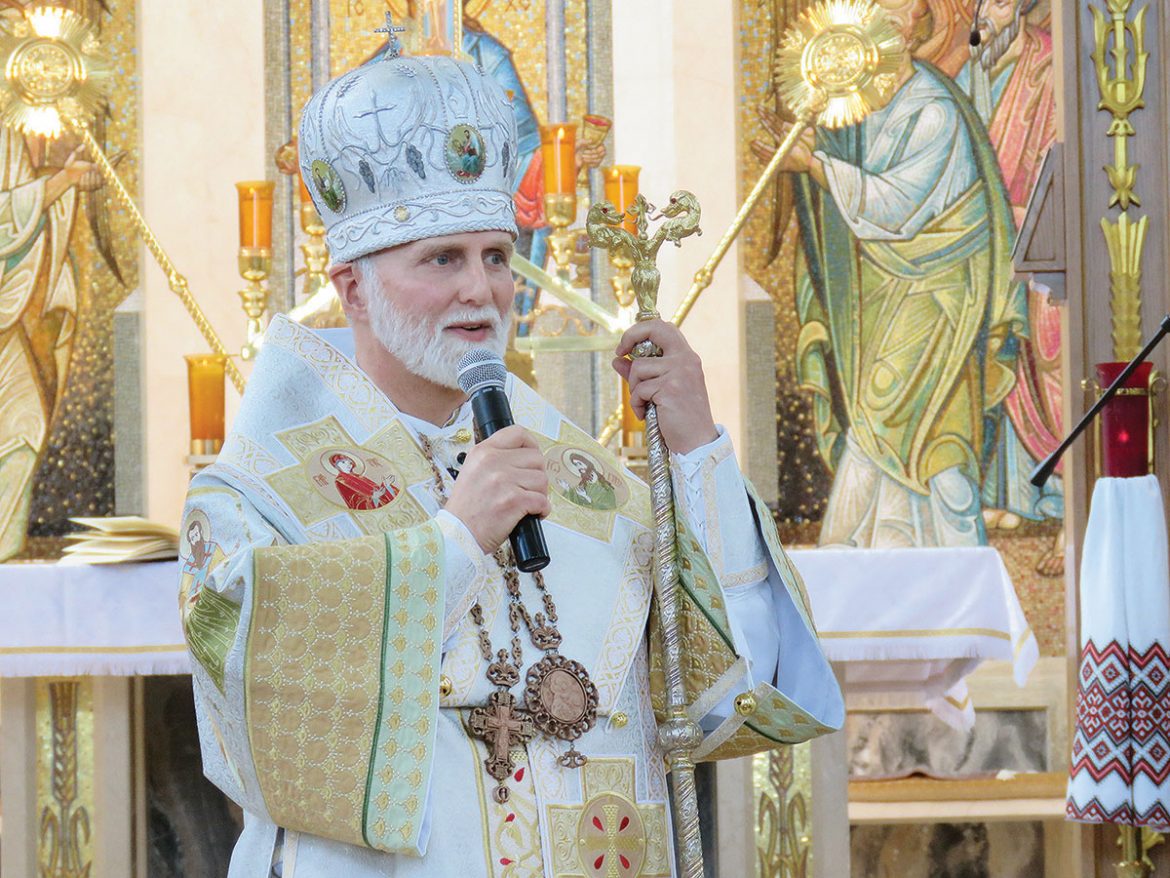 Bishop Borys, 58, from Syracuse, NY, was recommended by the Synod of Ukrainian Catholic Bishops in September 2018, and appointed Metropolitan and Archbishop of the Ukrainian Catholic Archeparchy of Philadelphia by Pope Francis on February 18 to officially take possession canonical of the archeparchy on June 4.

This date will be remembered as a milestone in the history of the Archparchy of Philadelphia and the Ukrainian Catholic Church.

Two hours before the start of the ceremony, which was scheduled for 11 a.m., there were already many people inside the cathedral and even more outside. Some waited patiently, others rather impatiently, to be admitted inside. A huge television screen has been installed outside to accommodate the expected overflow of hundreds of people.

At 10 a.m., the Ukrainian Catholic Cathedral of the Immaculate Conception was filling up quickly and the atmosphere was joyful, as the faithful and guests realized that they would soon be witnessing this truly historic event.

Finally, the liturgical procession began, and it was impressive. It was headed by a seminarian, Bohdan Vasyliv, who was followed by uniformed members of the Ukrainian Scout Organization Plast and the Ukrainian American Youth Association. The Knights of Columbus in their badges added to the festive atmosphere.

A view of the Hierarchical Divine Liturgy in the Ukrainian Catholic Cathedral of the Immaculate Conception.

Then come about 50 bishops from the Ukrainian Catholic, Eastern Catholic, Latin Rite and Ukrainian Orthodox churches, 125 priests, 11 deacons and 70 religious.

Many expected Bishop Borys to deal on his own – he was, of course, the man of the hour. But he was there, walking with all his brother bishops.

The last of the procession was Patriarch Sviatoslav, who blessed the congregation as the choir sang: â€œMay the name of the Lord be blessed forever.

The enthronement rite began almost immediately with the reading of the papal bull by the papal nuncio – the pope’s official proclamation that, from June 4, Bishop Borys Gudziak will become the Metropolitan Archbishop of the Archparchy of Philadelphia. The new metropolitan accepted the bull, held it in plain sight, and was rewarded with warm applause.

Bishop Bohdan Dzyurakh then read the history of the Ukrainian Catholic Church in America in Ukrainian, and Bishop Andriy Rabiy read it in English. Then the new metropolitan was invited to declare his faith by reciting the â€œSymbol of the apostlesâ€. It was only then that the new metropolitan was officially inducted to lead the Archparchy of Philadelphia. He received the pectoral cross and the archbishop’s staff by Patriarch Sviatoslav and was advised to rule by the example of Jesus Christ.

The priests of the Archparchy of Philadelphia stepped forward to swear obedience to the new metropolitan by kissing his hand, kissing the omophorion on his right shoulder and the epigonation, which is a rectangular part of the bishop’s garments. In a dramatic ecumenical gesture, Metropolitan Borys stood up and walked across the church to greet Ukrainian Orthodox Metropolitan Antoine.

The divine liturgy began with Patriarch Sviatoslav and Archbishop Peter as the main celebrants. The concelebrating clergy included Metropolitan Borys, Cardinal Dolan, Archbishop Chaput, His Excellency Archbishop Emeritus Stefan as well as the deans of the Archeparchy.

The responses were beautifully sung in English and Ukrainian by the combined choirs of the Archparchy of Philadelphia parishes under the direction of Bohdan Henhalo and Stephen Szyszka as musical organizer.

Patriarch Sviatoslav based his homily on the Gospel of Saint John. Just as the Holy Spirit helped the apostles strengthen their faith and aid them in their mission, so, if asked, he will help our new metropolitan on his memorable journey at the head of our Church. The Primate expressed his wish that our Church continue to be the heart of our Ukrainian community and that it be united with the Church in Ukraine.

There was great expectation for Archbishop Borys’ first homily as Metropolitan. No one was disappointed. He went downstairs, stood in front of the tetrapod, and spoke directly to the people. He expressed gratitude to his parents and teachers, as well as to God for his call to the priesthood. He spoke of those around the world and in our community who are marginalized by illness or physical disabilities. He promised to be their lawyer.

A mother with a child in a wheelchair was summoned outside the church, where he was standing. Metropolitan Borys said to the child: this is your cathedral and I will always be there for you. His words were so moving that it was truly a heart-to-heart moment.

[â€œFrom Heart to Heartâ€ was the theme of all celebrations, prayers and outreach on the occasion of the inauguration of Metropolitan Borysâ€™s ministry. The weeklong series of events in Philadelphia was to include: an exhibit of â€œIcons on Ammo Boxesâ€; a lecture by George Weigel titled â€œ20th Century and 21st Century Mission: Eastern Catholics and the Universal Churchâ€; various prayer services; a reception and a concert on the day of the enthronement; conferences of religious and clergy; and a youth day.]

The new Metropolitan then pointed out that the Ukrainian Catholic Church was believed to have been destroyed, but survived with the help of God and the Holy Spirit, and he promised to do his best to make the Church Ukrainian continues to prosper.

Bishop Andriy then stepped forward to thank everyone for their help in making this memorable day a success, and the celebration ended with the singing of â€œPrayer for Ukraineâ€ (Bozhe Velykyi) and “God bless America”.

Guests from near and far

This writer has been fortunate to meet some very interesting people from across the United States, Canada, and Europe who have become a part of Church history. Reverend Yuriy Lishchynsky traveled from Senlis, France, the historic home of Anna Yaroslavna, the Queen of France from Kyivan Rus’. Father Yuriy, pastor of Ss. Borys and Hlib, was ordained by Bishop Borys and served as his chancellor. He said he was saddened to lose his mentor and his beloved bishop, but was proud and happy that one of â€œusâ€ had been chosen to lead the Church in America. His farewell words: “Your gain is our loss.”

Oksana of Ohio said the new metropolis will face many challenges. A decreasing number of church members and the closing of churches and schools will need to be addressed. However, she said that she thought Metropolitan Borys was up to the challenge and wished her “Mnohaya Lita”.

Reverend Paul Makar, pastor of St. Nicholas Church in Minersville, Pennsylvania, said, â€œI am very impressed with the Metropolitan. He is highly educated and brings a lot of practical experience, as evidenced by his work with the Ukrainian Catholic University of Lviv. He inspires fidelity to the Church and to himself. I believe there will be changes, but they will be for the better.

While most of the comments from people I spoke to were very positive, some were critical. Some thought that a week of events was too extravagant and too expensive. When asked why they had come, some responded that they had come out of curiosity and pageantry, others because they wanted to be a part of Church history, and others because that they were impressed and even grateful that Bishop Borys was so visible during the Maidan in Ukraine.

Many expressed their congratulations to the new Metropolitan on his prestigious Notre Dame Prize, which will be presented in Lviv on June 29. .

Bishop Bohdan Dzyurakh of Kiev, who is secretary of the Synod of Ukrainian Bishops, said he and the whole Church rejoice at this choice of a Metropolitan – a man of compassion and deep faith. The bishop joked that the only people who are unhappy are the clergy and devotees of the eparchy of St. Volodymyr in Paris, who have lost their revered shepherd who had been one of them for seven years.

The Right Reverend Archpriest John Fields, Director of Communications, said that as a priest he welcomes his new spiritual father and hierarch. Metropolitan Archbishop Borys, a humble, praying teacher and spiritual leader endowed with so many gifts and talents, becomes to the faithful and the Church a gift of the Holy Spirit for which we are grateful to Almighty God.