By Oliver B. Pollak

RICHMOND, Calif .– The title of the adjacent newspaper clipping is a hype. “May” is not “will” or “shall”. Booster describes real estate developers, hawkers and visionaries who wanted to profit from growing communities and rising real estate prices. Saul Voorsanger, who emigrated from Holland with his wife Sarah in 1893, fostered the growth of the Jewish population. He was a salesman and publicist and the brother of Rabbi Jacob Voorsanger of Temple Emanu-El. The rabbi started Emmanuel-El, Jewish weekly in San Francisco in 1895 and died in 1908. Sol, Saul or S. became editor. In 1912, several newspapers reported on visits to Voorsanger Chambers of Commerce in San Diego, Visalia, Fresno, Modesto, Kings, San Joaquin, and Dinuba. He requested publicity for a special edition of 75,000 copies of Emanu-El recruiting wealthy Russian Jews to buy and cultivate Californian land, a pipe dream. Richmond’s plan was in line with ideas of Jewish emigration from the beginning of the 20th century to avoid ghettoizing Jews in towns on the east coast. In 1929, Sol conducted Yom Kippur services for 64 Jewish prisoners in San Quentin.

Places of worship dot the cityscape of Richmond. The Point Richmond Hills have raised their spiers again. Newcomers were attracted to the presence of co-religionists. Churches offered solace to strangers who sought compatible neighbors and a community to observe Christian and Jewish celebrations. Spiritual leadership has provided comfort in times of stress. Real estate agents tout the benefits of certain neighborhoods.

Population growth has led to prosperity. President Theodore Roosevelt, who served from 1901 to 1909, was an environmentalist and supporter of large families. At the turn of the 20th century, newspapers covered the birth reports of Richmond’s health commissioner, Dr Charles R. Blake, a Boy Scout promoter. Speculators and real estate developers wanted to sell land at increasingly higher prices. The construction industry has turned to timber framing, bricks and mortar. They made plans for schools, libraries, colleges, health care and other community amenities. Newspapers avidly supported civic development. The property tax funded education, firefighters, police, roads, and other necessities.

The Richmond City Directory of 1907 stated “that it is safe to predict that the population will exceed 20,000, and could reach 30,000” by 1910. Expectations were much lower, the 1910 census reported 6,802 inhabitants. The directory listed the First Methodist Church (1900) and the Catholic Church of Our Lady of Mercy (1902). Baptist, Christian Science Church, Episcopal, Methodist, Presbyterian, and Seventh-day Adventist quickly followed. There were Jewish owners among the 36 saloons, 29 real estate agents, 13 insurance agents, 12 restaurants and three funeral directors.

Bay Area newspapers noted where Jews could worship and sporadically described Jewish holidays. December 3, 1912 Richmond Daily Independent discussed Chanukah in an article titled “Old Hebrew Festival to Be Taken Tomorrow” and “Special Services in All San Francisco Synagogues to Celebrate Festival.” The Oakland Tribune announced plans in 1913 to build a new Oakland Synagogue. The Daily Independent reported in 1914: “Many local traders will attend the [New Year] services at the Synagogue, Ninth and Castro Streets, Oakland. »The Cities of San Francisco and the Bay of 1916 Jewish blue book has listed eight synagogues and temples in San Francisco, three in Oakland and one in Berkeley. Taking a ferry from Richmond to pray was inconvenient, Berkeley and Oakland were a bit slep. Perhaps lay leaders or seminary students conducted services in private homes or in temporarily rented space. In 1919, Yom Kippur would find Jews “praying in the various synagogues of the bay”.

My two-year project, writing the history of the Institute for Historical Studies founded in 1979, included reading Kansas and me, Memories of a Jewish Childhood by Annette Peltz McComas published in 1995 by Borgo Press in San Bernardino as No. 10 in their series “Studies in Judaica and the Holocaust”. It is printed in excruciating small print. McComas was a member of the IHS from 1988 until her death in 1994. Written by an 80-year-old losing her sight, it has undermined her impressionable childhood memories. His historical novel made it a non-fictional account of Jewish family life. A “briefly rated” review called it an “autobiography.”

McComas was born in 1911. Her family moved from Santa Cruz to Hutchison, Kansas in 1917. There were approximately 27 Jewish families among a population of 20,000. By the time she left to study at the University of California, Berkeley in 1928, there were 50 Jewish families out of a population of 30,000. It sounds so much like the Jewish growth of Richmond. The Jews of Hutchinson tried to combine the barely observant and the Orthodox by starting a Sunday school, minyan, and importing a student rabbi from Wichita; it didn’t last long. Today, the closest synagogue to Hutchinson is in Wichita.

Kansas was a dry (no alcohol) state with fundamentalist preachers. Anti-Semitism flourished. McComas ea spent a lot of time with her dog Kutcher and at the 1902 Carnegie Library where she read Oz and Tarzan books. All of her girlfriends were Christians. McComas, a playwright, went through childhood and adolescence and returned to Berkeley in June 1929, on the cusp of the Great Depression.

She described her 18-year marriage as disastrous. Her son died at the age of 37. She was going blind. This optimism defied. She wrote: “I greatly increased my skills as a writer and published a few meaningless little stories in meaningless little magazines. This book is far from meaningless. 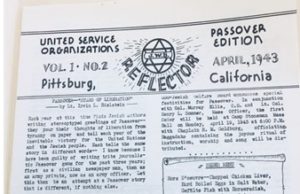 Perhaps the first report on Jewish worship in Contra Costa County appeared in a bulletin published at Fort Stoneman where in 1943 Jewish troops in transit to the Pacific Theater enjoyed Passover.

The influx of Jewish servicemen during WWII and growing families gave impetus in 1945 to building their own spiritual home, the Richmond Jewish Community Center at 45th and Macdonald, predecessor of Temple Beth Hillel.

A recent Google search revealed Richmond’s diverse spiritual life with around 120 churches, three mosques, a Buddhist and Hindu temple, and Beth Hillel Temple with over 75 years of local roots.

*
Oliver B. Pollak, professor emeritus of history at the University of Nebraska Omaha, and lawyer, is now a correspondent based in Richmond, California.

In Pakistan, we cultivated the Taliban, and then we turned against them. Now we can only hope they forgive us | Mohammed hanif

Opening of the Saint-Nicolas sanctuary on September 11