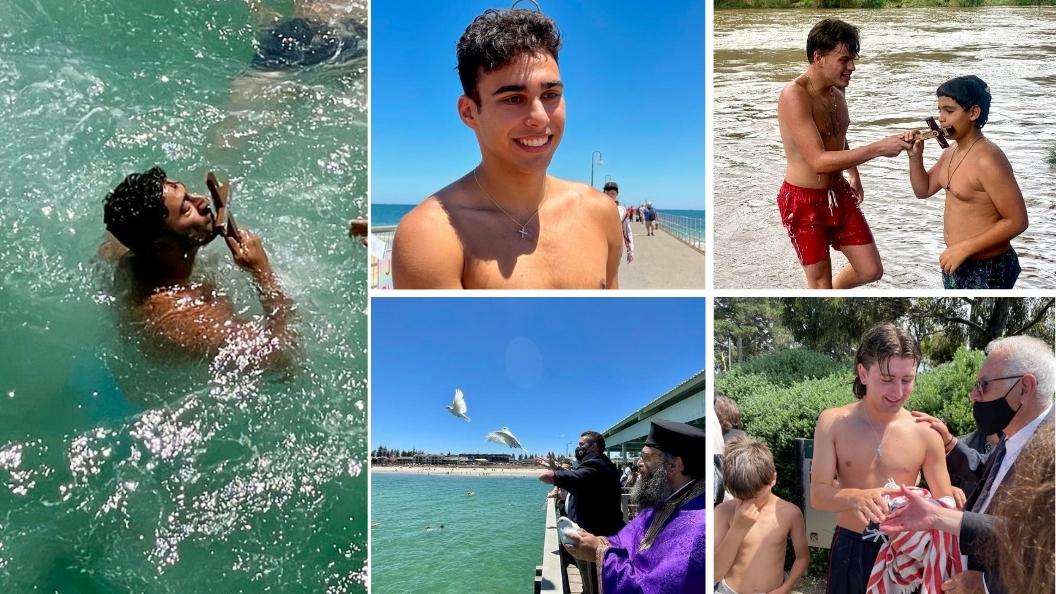 By Argyro Vourdoumpa and Andriana Simos.

The traditional blessing of the waters took place in South Australia, the Australian Capital Territory and Tasmania over the weekend to the delight of parishioners who attended.

Here is our list of all the winners and events that took place in those states and territories:

On Sunday January 9, 2022, the Blessing of the Waters ceremony took place at Glenelg Jetty for the 42nd consecutive year.

His Excellency Bishop Silouan of Sinope, along with Orthodox Christian clergy from Adelaide, led a procession down Glenelg Pier for the annual event.

They all watched with excitement as many swimmers young and old strove to be the first to retrieve the Holy Cross which was thrown into the sea from the pier.

Finally, 20-year-old Stelios Zacharakis (Î£Ï„Î­Î»Î¹Î¿Ï‚ Î–Î±Ï‡Î±ÏÎ¬ÎºÎ·Ï‚), who is in his second year at university in dentistry, recovered the Holy Cross. Stelios is from the parish of the prophet Elias, Norwood and this year was his third time diving for the cross.

“Go for it. This is my third year. Third year is all about charm. It’s really a matter of life.

This ceremony of the blessing of the waters was followed by the traditional Greek Glenelg Festival which, for the first time this year, took place over two days on Saturday 8 and Sunday 9 January on the grassy foreshore in front of the Stamford Grand Hotel.

The Greek Orthodox Community of SA (GOCSA) honored Epiphany at a scaled-down blessing of the waters event held at Henley Beach Pier on Sunday noon.

The community has canceled this year’s festival due to the increase in COVID cases in the state.

â€œIt is our duty to protect the community. Health and wellness come first and we will come together next year to celebrate with a bigger event, â€GOCSA President Bill Gonis said in his speech.

A total of nine people – including two girls – dived for the Cross with the winner Hristos Likouras (Î§ÏÎ®ÏƒÏ„Î¿Ï‚ Î›Î¹ÎºÎ¿ÏÏÎ±Ï‚), 30, for the first time.

“I feel overwhelmed,” he said The Greek herald. â€œWhen I woke up this morning I never thought I would get the Cross back but I tried anyway. If you have ups and downs in life, try to get out of it every day.â€

The Greek community in Canberra gathered at Casuarina Sands on Sunday January 9 to celebrate the annual blessing of the waters.

The liturgy was presided over by the Archiepiscopal Vicar of Canberra, His Excellency Bishop Bartholomew of Charioupolis, assisted by the parish priest, Father Petros Kipouros.

During a sermon, His Grace emphasized the importance of reflecting his life on Saint John by loving and trusting God and not being afraid to express his Orthodox Christian faith.

After the service, Bishop Bartholomew and parishioners traveled to Casuarina Sands to witness the Holy Cross being thrown into the water as swimmers attempted to retrieve it.

In the end, Emmanuel Papanikolaou, 18, of Samos origin, was named the winner.

â€œIt’s a good day with the community and it’s really fun. I’m just glad it can move forward because I thought it would be canceled due to COVID-19. So I am really happy.

The Tasmanian Greek community also hosted the traditional blessing of the waters at Sandy Bay Beach on Sunday January 9.

After a Divine Liturgy service, parishioners descended on the beach and applauded as the swimmers jumped to retrieve the Holy Cross from the water.

Yiannis Anagnostis, 20, of Hobart, managed to reclaim the cross this year after many years of competing in the race.