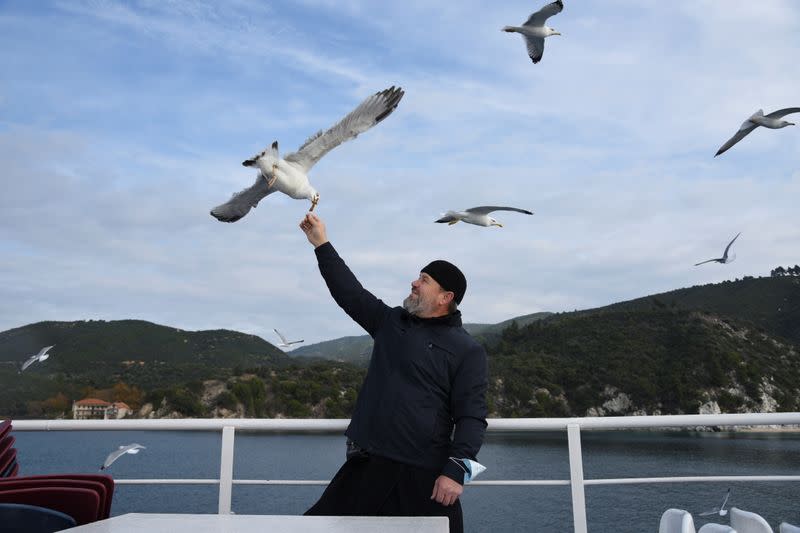 MOUNT ATHOS, Greece (Reuters) – In the chapel of a monastery on Mount Athos in Greece, Father Makarios read the gospel while leading a liturgy while awaiting his coronavirus vaccination.

He knows when to separate religion from science, he says.

“I had some thoughts on whether (vaccination) is necessary. Of course we have faith in God and God protect us,” said the 70-year-old monk, who said he had “approached the death “after catching COVID-19.

â€œBut science is something in the hands of God, God enlightens scientists so that they can protect humanity,â€ he said.

Mount Athos is one of the most sacred religious sites of the Orthodox Church. The coronavirus has spread like wildfire and a campaign is underway to vaccinate the approximately 1,600 monks in the gated community of the Halkidiki peninsula in northern Greece.

Nine have died since the start of the pandemic and many of the 20 monasteries have been infected. But vaccination rates remain at around 40%, and a relaxation of security measures has made the problem worse on the popular visitor site.

Between October and November, at least 100 cases were recorded, said Giorgos Miteloudis, a doctor at the Mount Athos health center.

â€œIt is exceptionally dangerous in a closed community like a monastery, which is fundamentally like a family, where it is difficult for family members to protect each other,â€ he said.

After seeing others fall ill or catch the virus themselves, at least 30 monks have stepped up to get vaccinated this month. Many of those who live on Athos are over 70 and play a special role in the community.

â€œOn Mount Athos the old people are called the elders, the respected elders, they are the guides of spiritual life on Mount Athos. They impart their wisdom and personal spiritual experiences, even their holiness, and we owe it to ourselves to protect them. said Miteloudis.

Over 1,000 years old, the autonomous Orthodox spiritual center has dozens of small living units with its monasteries, which makes it difficult to track infections.

Encompassing an entire peninsula jutting out into the Aegean Sea, it is prohibited for women and children. Russian President Vladimir Putin, Prince Charles of Great Britain and several celebrities made a pilgrimage there.

Athos closed to outside visitors for three months during the last lockdown, reopening in February. Only rapid tests are currently required to enter the site.

But cases in Greece hit new highs this month and hospitals are under pressure again, especially in the north.

For some on the Holy Mountain, vaccinations have been a struggle between science and religion. But Father Epifanios, who came to the health center for his third vaccination, did not have this dilemma.

â€œMedicines are medicines, they are not holy water,â€ he said.

The stroller, November 23, 2021: Events in the Alle-Kiski valley