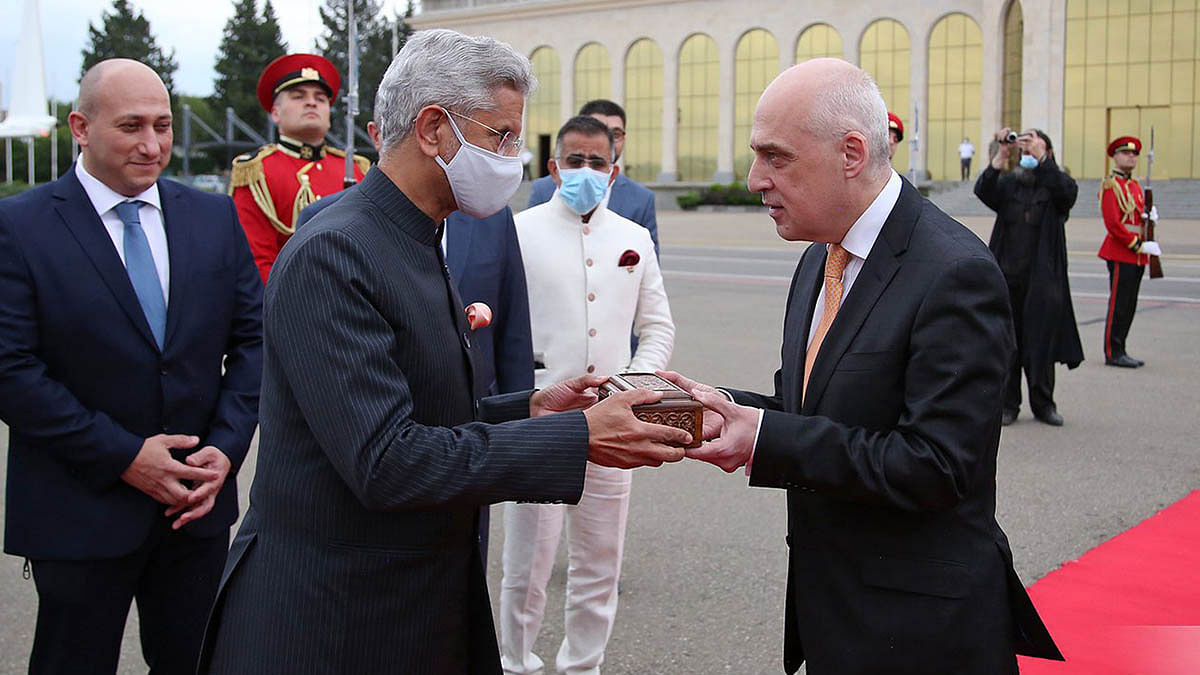 Jaishankar handed the relic to his counterpart David Zalkaliani, also the country’s deputy prime minister, just after arriving in Georgia for a two-day visit.

It was then handed over to His Holiness and Beatitude Ilia II, the Catholicos-Patriarch of Georgia or spiritual leader of the Georgian Orthodox Church, and Prime Minister Irakli Garibashvili.

Nice to welcome my counterpart @DrSJaishankar on his first visit to ðŸ‡¬ðŸ‡ª, who brought the relics of Queen Ketevan from ðŸ‡¬ðŸ‡ª. This visit will certainly play an important role in strengthening the ties between our countries and taking our relations to a whole new level. pic.twitter.com/w2iqQZCwyk

The return of the relic, excavated in Goa in 2016, has been hailed by the ruling Georgian Dream Democratic Party as an “unprecedented” gesture and one that will be remembered and appreciated.

Ketevan arouses deep reverence among Georgians as a martyr of the faith who refused to convert his religion even though it led to his death.

Read also : India, China not in the nuclear arms race, got them with different goals: Jaishankar in Moscow

Who was Saint Queen Ketevan?

Holy Queen Ketevan, also known as Ketevan the Martyr, was the queen of Kakheti, a kingdom in eastern Georgia in the 17th century. She was married to Prince David of Kakheti, who later became king of the region in 1601 but died a year later in 1602. After his death, Ketevan devoted himself to religious and charitable activities.

David’s father Alexander II, who had been ousted from the throne by his son, succeeded in 1602 and ruled Kakheti, according to the book ‘Edge of Empires: A History of Georgia ‘ by Donald Rayfield.

Eventually, after much unrest with Shah Abbas I of Iran in the Safavid dynasty, Alexander II was killed by his other son Constantine I, who also converted to Islam at the Safavid court. After reigning for a few years, he died in a battle led by Queen Ketevan.

However, in 1613, Shah Abbas I conquered Kakheti and took Queen Ketevan hostage. She was detained in Shiraz, a city in south-central Iran, for 10 years.

Many attempts were made to convert her to Islam and join a harem, but she refused. Finally, she was strangled to death on September 22, 1624.

However, two of his Augustinian brothers, who had gone to Shiraz in 1623, were able to get hold of his remains and keep it with them until 1627. Some of them were taken to Saint Augustine Convent in Goa. .

In 2016, after a long chase away, the Queen’s remains were found in the Old Goa building.

“We were able to establish that the remains found in the Saint-Augustine complex in Goa were those of Queen Ketevan of Kakheti in Georgia,” said N. Taher, chief archaeologist, Archaeological Survey of India (ASI), Hyderabad Circle , when the discovery was announced.

The search for the remains was part of a 26-year project led by Taher with a team from CSIR-Center for Cellular and Molecular Biology, Hyderabad – including Niraj Rai, Manvendra Singh, Aditya Nath Jha and Kumarasamy Thangaraj – and Gyaneshwar Chaubey of the Biocentre Estonian and Lalji Singh from the Hindu University of Banaras.

According to them research paper, Ketevan was canonized by the Georgian Orthodox Church.

“Given the importance of Queen Ketavan to the Georgian people, officials from the Soviet Union, Russia and Georgia have called on the Indian government to help them find the relics of Queen (Saint) Ketevan in Goa, “the newspaper said.

Since the relics were excavated, the Georgian government has urged India to hand them over.

Therefore, in 2017, at Georgia’s request, India sent the relics to the country for a six-month display, according to Foreign Ministry sources.

The relics were then personally accepted by His Holiness and Beatitude Ilia II as well as many Georgians on September 23, 2017.

This relic loan was extended for six months and they spent the year traveling to different churches in Georgia. They were returned to India on September 30, 2018.

According to ministry sources, due to Georgia’s “persistent demand” for the permanent transfer of the relics – coupled with the historical, religious and spiritual sentiments attached to Saint Queen Ketevan by the Georgian people – New Delhi has decided to donate the relics. ‘part of the relics. to the government and people of the country.

Sources said the move would “strengthen” the ties of friendship and understanding between India and Georgia.

Jaishankar is the first foreign minister of India to undertake an official visit to Georgia after its independence from the former Soviet Union in 1991. Former Prime Minister Atal Bihari Vajpayee had visited the country before him when he was minister of Foreign Affairs in 1978.

But the news media are in a crisis of their own. There have been brutal layoffs and pay cuts. The best of journalism is shrinking, giving in to crass spectacle in prime time.

ThePrint employs the best young reporters, columnists and editors. Supporting journalism of this quality requires smart, thoughtful people like you to pay the price. Whether you live in India or abroad, you can do it here.

Xi bets on disunity and misunderstanding between rival powers