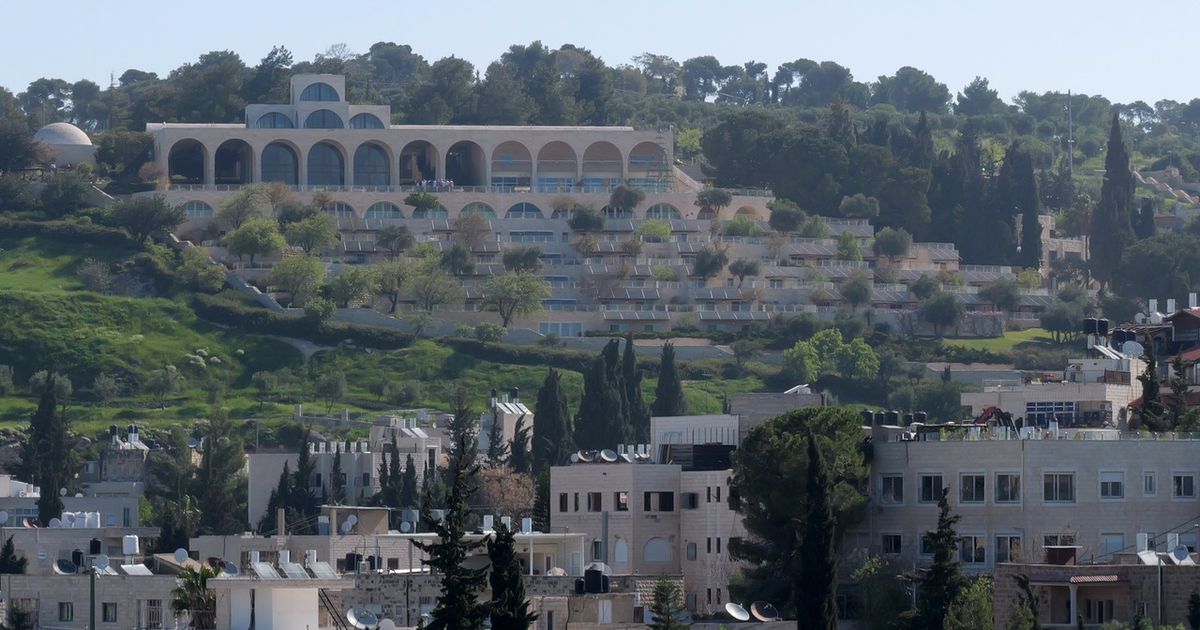 Jerusalem • The Center for Near Eastern Studies at Brigham Young University Jerusalem faced such opposition in the mid-1980s that Jeffrey R. Holland, then president of the school, was welcomed at an Israeli airport by several hundred yeshiva students, carrying signs saying, “Jeff, go home.

In the decades that followed, however, over 10,000 students with The Church of Jesus Christ of Latter-day Saints studied there.

In fact, Latter-day Saint students and tourists provide enough business to Jimmy’s Bazaar to Jerusalem to specialize in carving figures from the Book of Mormon and the “first vision” of the faith in olive wood. (Owner Jimmy Abu Sbeih proudly shows a photo of himself with Latter-day Saint Apostles M. Russell Ballard and D. Todd Christofferson to potential buyers.)

A jewish newspaper recently called the school “a benign element on the Jerusalem scene.”

BYU professor James R. Kearl, who has served as the university’s assistant to the president for the center since 1989, says the eight-level, 125,000-square-foot building — across from Old Town and overlooking the Mount of Olives and the Kidron Valley – is more than that.

“In a quiet and important way, he became part of the community, instead of being seen as an outsider,” Kearl says. “He fills the role of a church presence in the Holy Land.”

And this is done without the hallmark outreach tool of faith – proselytizing.

Indeed, fear of church evangelism is what spurred the opposition in the first place.

(Michael Stack | Special for The Tribune) A group of Latter-day Saint tourists on the terrace of BYU Jerusalem Center on Saturday, April 9, 2022

The original idea for the centerfirst espoused by then-church president Spencer W. Kimball in 1979, was that the building would establish a presence for the Utah-based faith in the Holy Land as well as house students from BYU who were taking a semester of study abroad there. .

The church hoped to buy the property on which the center now sits, but in 1983 discovered that the Israel Lands Authority owned it.

After much discussion, that body was persuaded to lease the land to the church, so in 1984 the two parties agreed to begin construction, Kearl says, without a long-term lease.

Soon, the ultra-Orthodox Jews of Mount Scopus launched serious opposition that was “pretty nasty and quite long,” Kearl says. This culminated in threats from the Knesset (Israel’s parliament) to expropriate the building and “pay the Mormons”.

The US Congress got involved and made its own threats, says the BYU administrator. If the government tried to take the center (then partially built), Israel would lose access to American resources.

Kollek hoped to make Jerusalem an international secular city, Kearl says, but his vision was rejected and he lost his seat.

Israeli officials eventually offered the church a long-term lease – if its leaders agreed not to allow proselytizing.

That too was not an easy sell.

A long and lively meeting of Latter-day Saint general authorities was held on July 31, 1985, to discuss the matter, writes Holland, now an Apostle, in a BYU studies article.

The discussion turned and turned, he writes, until a leader (whom Holland does not name) stood up and said:

“I am ready to sign with everyone, but just remember that I would rather walk away from a number of Jerusalem Center projects than ever compromise our integrity as a church.…If we say that we are not going [proselytize]then we don’t [proselytize]. There will be no quibbles, there will be no behind-the-scenes manipulations or clandestine activities. So Brethren, whatever we do, let’s make sure we understand all the implications before we put ink to this paper.

So, until then, all Latter-day teachers, students, and members know that they cannot share their faith or do or say anything that would cause anyone to become interested in the Church. Only members can attend services and no Israeli citizen or resident can be baptized. Indeed, the center does not have a baptismal font.

The center was meant to be a “First Presidency building” that also housed students, Kearl said. Now that has been reversed, with BYU being the main player but allowing it to be used for services and members.

It also provides important services to the community – concerts, conferences, humanitarian projects and is open for free for workshops and conferences.

Plus, the center employs over 50 locals, which isn’t a lot, Kearl says, “but it’s not trivial either.”

An “Island of Peace”

Eric Huntsman, the center’s academic director, arrived in April to open the center after it was closed for two years due to the COVID-19 pandemic and has now completed its first semester with students.

The exuberant scholar states unequivocally: “I love living in Israel.

Sure, he fully understands the country’s tensions, but the work brings together many of Huntsman’s interests, including history, scripture, religion, and culture.

And students and faculty eat all the historical and biblical sites, while learning about Judaism, Christianity, and Islam.

Students must take two courses, one on Zion and Judaism, taught by an ultra-Orthodox Jew, and one on Islam and the Palestinian struggle, taught by a local Muslim. They also study Hebrew or Arabic and visit various churches, synagogues and mosques (including the holiest in the al-Aqsa compound).

The center’s executive director is a secular Israeli Jew and the deputy director of facilities and administration is a Palestinian Christian.

Along with other groups, the center tries to be, says Huntsman, “an island of peace.”

(Michael Stack | Special for The Tribune The chapel at BYU Jerusalem Center overlooking the Old City of Jerusalem on Saturday, April 9, 2022

For Marc Ellison — a BYU professor who taught Old and New Testaments at the center this spring and accompanied students on field trips throughout the Holy Land, Greece and Jordan — the experience was unforgettable.

“For me — someone who loves the Holy Land, religious history, the Bible, BYU students, and living Christian faith as a Latter-day Saint,” says Ellison, who is now back in Provo, “it was paradise”.

It would be hard to find “a more ideal setting,” he says, “to deepen our understanding of faith, ancient and modern.”

Many of his Latter-day Saint students “know the Book of Mormon well and have read it many times,” he said, “but few have read the Bible cover to cover or feel as comfortable with her”.

This program offers “a fabulous and unique opportunity to develop biblical literacy and historical awareness by learning about stories, history and religious ideas,” he says. “There’s nothing quite like studying the Bible on the spot – reading the Sermon on the Mount on a hill overlooking the Sea of ​​Galilee, rehearsing the Assyrian invasion while being in Lachish ruinsetc.”

On top of that, says Ellison, students make friends among locals, “enriching their outlook and expanding their hearts.”

They are coming back, Professor BYU says, “more compassionate and intelligent citizens of the world.”

Alumni of the Jerusalem Center consistently say, “As strange as the Holy Land should have seemed, they were surprised at how familiar it was,” reports April Giddings Cobb, President of the Center Alumni Association. “They say going to Jerusalem was like coming home, which they didn’t expect.”

For many, their time at the center is transformative, says Cobb. “Nearly every story of how miracles and changes came to these young people while they were abroad comes back in one way or another to how they came to know the Savior and how they discovered that he loves them through this experience.”

After that, she says, they have “a better understanding of the Scriptures and their hearts are more firmly set in the gospel of Jesus Christ.”