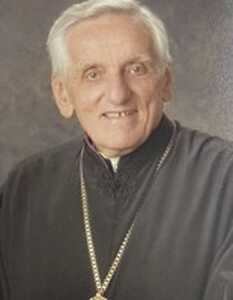 Very Reverend Protopresbyter John Paul Gido. You are a priest forever, after the order of Melchizedek. Father John Gido, 93, was born in Erie, Pa. On July 12, 1928 and rose to eternal life on November 25, 2021. His beloved wife of 50 years, Pani Pauline Kesselak Gido, his parents, John E. and Mary A Magdinec Gido, and in-laws Andrew and Kathryn Kohan Kesselak, senior. Survivor is his son John, his daughter-in-law Tammy, his grandchildren Jacob and Sarah, and his daughter Mary, his sister-in-law Catherine and her husband Nick Timko, in addition to numerous cousins, nieces, nephews and great-nieces and nephews. Father John received his elementary and high school education in Erie County Public Schools, and graduated from Erie East High School in 1946. He attended Gannon University in Erie, Pa., The Holy Trinity Orthodox Seminary in Jordanville, New York and Christ the Savior Seminary in Johnstown. , Pennsylvania, becoming a member of its first class of seminarians. After graduation he married Elder Pauline Kesselak of Johnstown, Pa. On September 25, 1954. Father John was the first seminarian to be ordained by the late Metropolitan Orestes, of thrice blessed memory, in the Cathedral. of Christ the Savior newly consecrated in Johnstown. October 3, 1954. His first pastorate was St. John the Baptist Church in Hawk Run, Pa., where he served for six and a half years. During his pastorate, the land was blessed for the site of a new church and a cemetery, and in 1960, Metropolitan Orestes, consecrated a beautiful new church for the parish. During this time he was also chaplain at Pennsylvania State College University. Father John and his family came to St. John the Baptist Church in Ambridge, Pennsylvania and served his first Divine Liturgy on August 7, 1960. He retired after 54 years of service in 2006. After taking Upon retirement from his parish, he continued to serve as a substitute priest for another 10 years for Orthodox churches in Allegheny County, Beaver County and surrounding areas. Most recently, Father John celebrated his 67th anniversary of ordination on October 3, 2021. During his pastoral ministry, Father John served as Orthodox Chaplain at Dixmont State Hospital in Glenfield, Pennsylvania for over 20 years; he was Dean of the Pittsburgh Deanery from 1988 to 2006; he was a member of the Executive Council of the Greater Pittsburgh Area Orthodox Clergy Brotherhood; he was a member and former officer of the Ambridge Interfaith Clergy Association; he chaired the annual Distinguished Diocesan Donor Appreciation Dinner for the host, Metropolitan Nicholas, which benefited at Camp Nazareth in Mercer, Pennsylvania; he was the chairman of the annual American Carpathian-Russian Day; he chaired the annual charity dinner on Saint Nicholas’ Day which raised funds for the diocesan seminary; he was the president of the annual charity dinner of Saint-Nicolas of the parish of Saint-Jean to help parishes or organizations in need; he served as master of ceremonies for diocesan celebrations at the Christ the Savior Cathedral and Seminary in Johnstown, and the dedication of Cyril and Methodius Church at the Diocesan Youth Camp and Retreat Center in Mercer, Pa .; he attends the canonization ceremonies of Father Alexis Toth, leader of our people in America, at the monastery of Saint Tikhon where he has the honor of carrying the coffin containing his bodily remains; he accompanied Metropolitan Nicholas to Constantinople to attend the 150th anniversary of the Ecumenical Patriarch’s Seminary on the Island of Halki; he accompanied Metropolitan Nicholas to Gorlice in Poland for the canonization ceremonies of Saint Maxym Sandovych, martyred for his love and devotion to the Orthodox Church and to the faithful; a new parish center and parsonage were built in Ambridge, and mortgages on the new church, parsonage and parish center were eliminated under the pastorate of Father Johns; he taught the children of Ambridge several Christmas plays, creating costumes and sets with the help of Pani Pauline; he also taught the cantors and organized the “Koladniky” every year, visiting the houses of the parishioners during the Christmas period; he and Pani Pauline served as an “alter society” to whitewash and dress the altar during the liturgical year; he and Pani Pauline have also been hosts of the Pittsburgh International Visitors Council for a number of years, as well as hosts of many foreign visitors to our diocese and translators. Father John was an avid gardener and while in Ambridge he looked after the landscaping of the parish. He then transferred these gardening skills to his daughter’s home where he lived after his retirement and excelled in flower arranging and decorating. He liked to visit various outdoor gardens and conservatories. He volunteered as an archivist at the Captain William Vicary Mansion at Freedom Pennsylvania, nurturing his love of history. He loved art and architecture and loved visiting museums, historic buildings and living history museums. He played the violin and loved music, especially choirs and liturgical hymns, as well as classical music, musicals and opera and loved to sing. He also loved books and read voraciously. He was also an amateur actor and liked the role he played in The Fiddler on the Roof the best. Father John had a real vocation from his childhood. He was devoted to his faith and to his church, loved his confreres, his ward members and his family, and was dedicated to them during his lifetime. Please remember him in your prayers. Friends will be received on Monday, November 29, 2021 from 3:00 p.m. until time for a priest’s funeral at 7:00 p.m. at St. John The Baptist Church, 450 Glenwood Drive, Ambridge, PA. A liturgy will be held on Tuesday, November 30, 2021 at 10:00 a.m. Komashna immediately after at the Parish Center. Interment to follow at St. Nicholas Cemetery, Erie, PA. In lieu of flowers, please consider making a donation in memory of Father John to Christ the Savior Seminary to help sponsor future vocations. Checks may be made payable to Christ the Savior Seminary and sent to: Christ the Savior Orthodox Cathedral 300 Garfield St., Johnstown, PA 15906. BOHN-MATICH FUNERAL & CREMATION SERVICES, INC., 1099 Maplewood Ave., Ambridge , is in charge of arrangements.

U.S. and Russian foreign ministers to meet as tensions in Ukraine soar