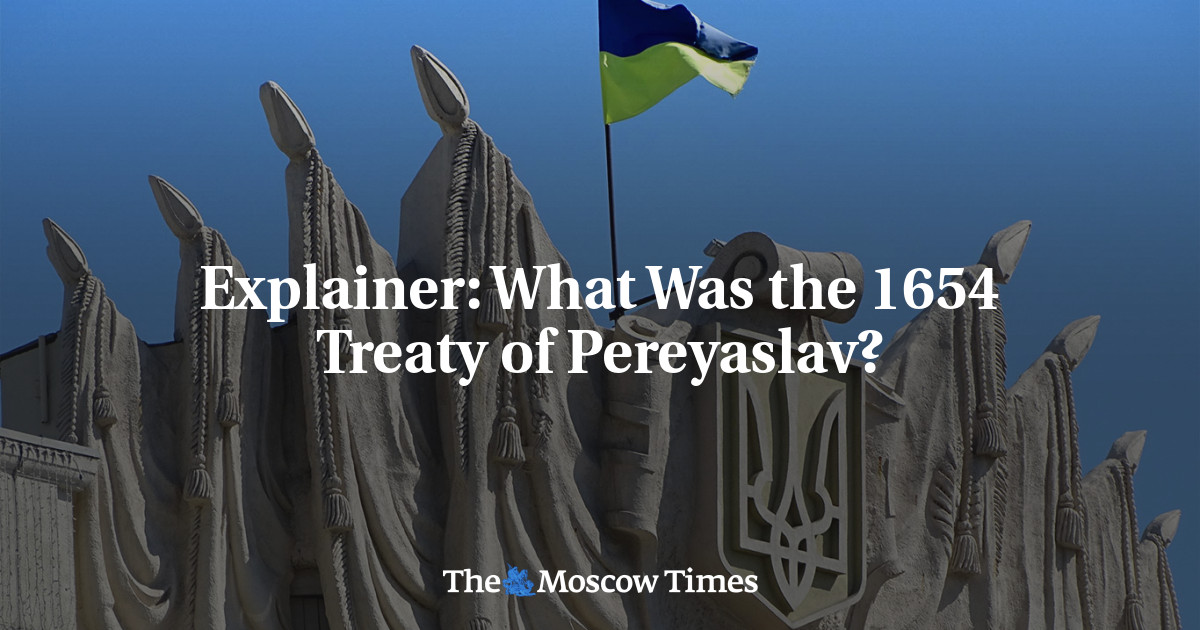 After Ukraine’s vote for independence in 1991, Gennady Burbulis, then Deputy Prime Minister and close adviser to Boris Yeltsin, remarked that it was “inconceivable, for our brains, for our minds, that [Ukraine’s independence] would be an irrevocable fact. But Russia’s government at the time resisted calls from senior military officials and politicians like former Moscow mayor Yuri Luzhkov to “reclaim” Crimea or “reimagine” Ukrainian territory.

It’s not just the military and politicians who have struggled to accept Ukraine as a sovereign nation. Dissident writer Alexander Solzhenitsyn called the “talk of a separate Ukrainian people existing since the 9th century” a “newly invented lie”. He condemned the “cruel” partition of Ukraine and Russia and proposed the creation of a “Russian Union” comprising Russia (minus the Caucasus), Ukraine, Belarus and northern Kazakhstan.

This failure to accept Ukrainian independence stems, in part, from a 368-year-old treaty that few historians had paid much attention to over the years: the 1654 Treaty of Pereyaslav.

What was the geopolitical situation at the time?

The Mongol invasions of the early 13th century divided Kyivan Rus’ and forced the local princes to accept their new lords and pay homage to them. To the north, small principalities near Moscow began to regroup and eventually stopped paying tribute. In 1552, Ivan the Terrible won victory over the Kazan Khanate, but the strength of tsarism waned after he killed his son in a fit of anger and the end of the old dynasty. After the Time of Troubles, when Poland claimed victory over Moscow, a new Tsar, Mikhail, was crowned and started the Romanov dynasty. By the mid-17th century, Russia was a consolidated state that was expanding and battling with neighboring empires, principalities, and kingdoms.

Kyiv was destroyed by the Mongol invasion in 1240, but a strong leader, Daniel of Galicia, gathered lands which included Halych, Galicia, Volodymyr-Volynskyi and Kyiv. In 1253 he was crowned first king of the new kingdom of Ruthenia. As in Muscovy, Daniel fought other kingdoms, duchies and empires to claim these lands, while Poland and the Crimean Khanate colonized territories. In 1579, the Polish-Lithuanian Commonwealth incorporated most of the Ruthenian lands, codified into the Union of Lublin. But the Ruthenian Cossacks and peasants, both Orthodox Christians, banded together and finally, in 1648, rose up against the Polish-Lithuanian Commonwealth, reclaimed Kyiv and founded the Cossack Hetmanate.

What was the treaty about?

The Pereyaslav Treaty provided military protection for the Cossack Hetmanate in exchange for an oath of allegiance to the Tsar of the Cossacks, church members, and inhabitants of the Hetmanate. It was a political union that bound much of eastern Ukraine and Kyiv to Russia, but it remained part of Poland until it officially ceded Kyiv in the Russo- Polish. The Cossacks were allowed to retain their state autonomy, and the Metropolitan of Kyiv would report to Constantinople rather than Moscow. As a political union, the Sich (military and political center) could not pursue its own foreign policy because Russia was acting in its name; Ukraine was independent, but not fully.

It is a subject of great debate. The Ukrainian press said it was imposed on Bohdan Khmelnitsky, head of the Sich, under adverse circumstances. Historian Serhiy Plohy wrote that Khmelnitsky saw it as a temporary solution. Anyway, the Ottoman Empire had promised to support the Cossacks in the battles against the Polish-Lithuanian Commonwealth, but proved to be an unreliable ally. Since Khmelnitsky clearly felt that he could no longer count on the support of the Ottomans, Orthodox Moscow was therefore the most natural ally at the time.

What are Vladimir Putin and the Russian press saying about the treaty today?

In his 2021 essay on Ukraine, the Russian leader cited the letter written by Bohdan Khmelnytsky to Tsar Alexei Mikhailovich in 1654, in which he “thanked” him “for taking” the entire Zaporizhzhian army and everyone Russian Orthodox under the strong and high hand of the Tsar.’ This means that in their appeals to the King of Poland and the Tsar of Russia, the Cossacks referred to and defined themselves as Russian Orthodox.

How is this part of current historical myth-making in Russia?

In contemporary Russian histories, the early Romanovs are often portrayed as heroes who brought Russia back from the brink, reasserted state power, and re-liberated Russian lands. It is in this context that the Pereyaslav Treaty plays on the idea of ​​a Ukraine and a Russia “legitimately reunited” or of return.

School textbooks, religious leaders, television documentaries and even telegraphic messages from Russian officials all use similar language to promote the idea that Ukrainians and Russians have always been one people, historically and spiritually part of one nation.

For many, the so-called “military operation” is a course of correction in history, not a horrific invasion at enormous cost.