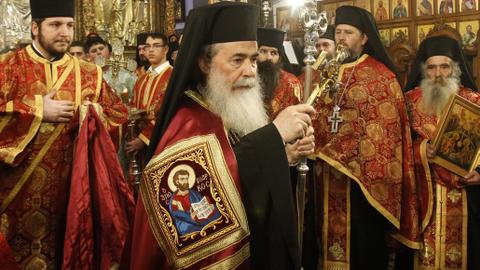 The Christian holiday marks the visit of the three wise men to Jesus soon after his birth as well as the baptism of Christ. For the Orthodox, Epiphany marks Christmas Eve according to the Julian calendar.

The Syro-Orthodox Patriarchal Vicar of the Holy Land and Jordan, Archbishop Mar Swerios Malki Murad, was the first to arrive in Bethlehem to attend Christmas Mass on Friday at midnight.

The Greek Orthodox Patriarch Theophilos III of the Holy Land arrived at the Church of the Nativity in Manger Square amid the rain.

Palestinian President Mahmoud Abbas and a host of Arab officials were due to attend Christmas mass at the Church of the Nativity.

Protesters threw eggs at the Patriarch’s procession as it arrived in the city at midnight. Protesters accuse the Patriarch of signing agreements with Israel to sell and rent endowments from the Orthodox Church.

Earlier on Saturday, dozens of protesters gathered in Bethlehem to call for a boycott of the Patriarch.

The Greek Orthodox Church owns vast amounts of land throughout Jerusalem, including the land on which Israel’s parliament, the Knesset, is built.

In 2005, the Palestinian-run Petra and Imperial hotels were sold by the church to Ateret Cohanim, a group working to establish a Jewish majority in the Old City and East Jerusalem.

The lingering disagreement between the Ukrainian and Russian churches was highlighted in the Christmas messages from their leaders ahead of this weekend’s Orthodox holiday.

Patriarch Filaret, head of the Kiev-based Ukrainian Orthodox Church, on Saturday wished his country a “victory over the aggressor” amid continued conflict between Ukraine and Russian-backed rebels.

â€œWe wish our Lord will help us banish all evil and achieve victory over the aggressor because the truth is with us,â€ Filaret said in a video posted on the Kyiv Patriarchate website. He called on God to lead Ukraine to a “final victory over the enemy”.

The outbreak in 2014 of the separatist conflict between Kiev and Kremlin-backed rebels in the east of the country exacerbated already existing religious tensions. The Kiev-based Ukrainian Orthodox Church supported the bloody popular uprising that toppled a Kremlin-backed government.

The rift was brought to light earlier this month after it was reported in Ukraine that a grieving father hit a priest at the Moscow-led church after he allegedly refused to bury his youngster son died in an abnormal accident.

A Christmas Eve mass was celebrated on Saturday by the Greek Orthodox Patriarchate Fener in Istanbul.

The celebrations began early Saturday with a mass held in the Hagia Yorgi Church led by Patriarch Bartholomew.

The service was followed by a ritual at Quai Fener in the Golden Horn in which the patriarch throws a large cross into the sea to be retrieved by a group of swimmers.

Erdogan to reopen the Iron Church

Bulgarian Prime Minister Boyko Borisov will also be present at the ceremony in the city’s Balat district, according to a statement released on Saturday by the presidential press office.

The Orthodox Church, also known as St. Stephen’s Church, is located in the historic district of Balat, on the banks of the city’s Golden Horn.

It had been the subject of major restoration works for the past seven years, as part of a project co-financed by the Istanbul Metropolitan Municipality and the Bulgarian government.

It was rebuilt in 1898 from prefabricated cast iron elements after its old wooden structure caught fire.

Celebrations in the rest of the world

In many places in Europe, Epiphany was a day when children received gifts or enjoyed special entertainment.

Rome’s Piazza Navona is famous for a holiday market with many toy stalls. Children believe that a witch riding a broomstick brings toys for well-behaved children while those who have not behaved are given pieces of charcoal.

Pope Francis on Saturday advised against making the pursuit of money, a career or success the basis of his whole life, urging in his remarks on Epiphany to also resist “inclinations to arrogance, thirst for power and wealth “.

Since many Christians keep Epiphany to remember the three wise men who followed a star to find the baby Jesus, Francis suggested asking “which star have we chosen to follow in our lives?”

Parents and their children packed city sidewalks across Spain to witness colorful parades.

The Friday processions, held on the eve of Epiphany, feature decorative floats with people dressed as kings and carrying gifts for Jesus. The floats also feature light and music shows, as well as clowns and jugglers throwing candy at crowds.

Christmas gifts are traditionally given on Epiphany Day in Spain and in many Latin American countries. Children write letters to the Magi or the Three Wise Men on the eve of the holiday, asking for gifts.

The giant square in Mexico City was surrounded by “kings cake” on Friday evening as part of the capital’s traditional celebration of the feast of the three kings.

Some 250,000 people took to the main square known as Zocalo to devour the huge brioche-style cake known as “Rosca de Reyes”.

Some 2,142 bakers helped make the Rosca, which measured 1.44 kilometers and weighed 9.375 tons, for the city’s annual Epiphany Eve celebration.

“This Rosca is so delicious!” said Dolores Rodriguez, who at 84, was attending the party for the first time.