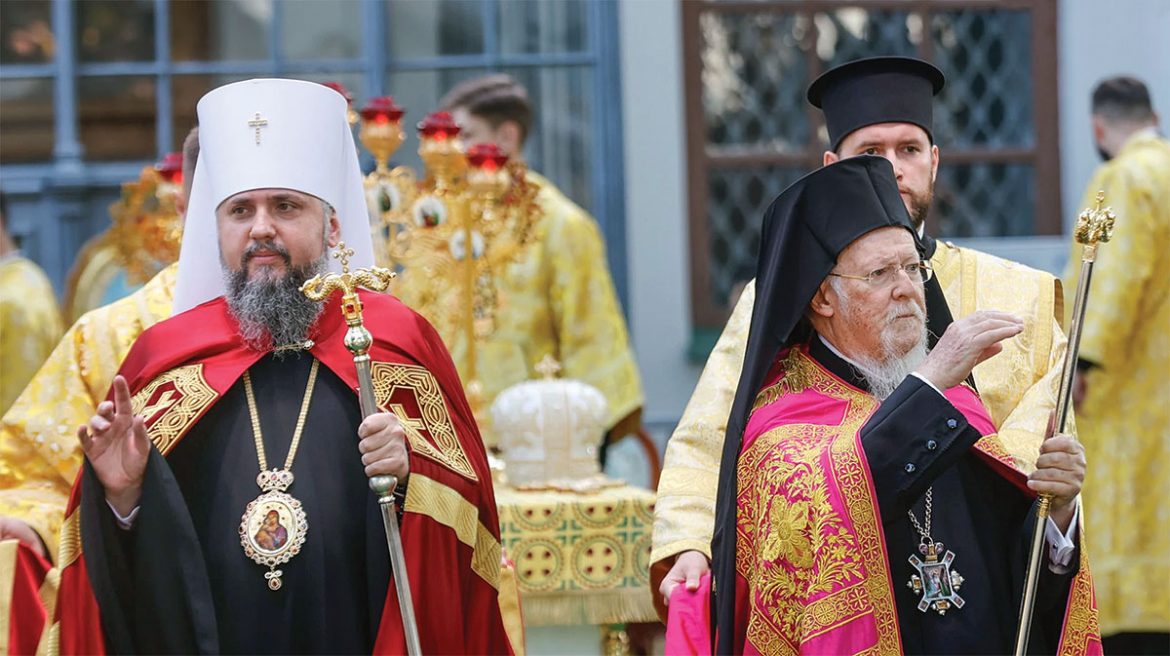 KYIV – Ecumenical Patriarch Bartholomew I of Constantinople traveled to Ukraine to participate in the country’s 30th Independence Day celebrations despite opposition from the Russian Orthodox Church.

Two years ago, Bartholomew I, who is considered the first among his peers in the Orthodox Patriarchate, presented a decree of independence to the head of the nascent Orthodox Church of Ukraine, severing his centuries-old ties with the Russian Orthodox Church. The establishment of an independent Ukrainian Church has become a historical event and has been celebrated by many Ukrainians around the world.

Ukrainian President Volodymyr Zelenskyy met with Patriarch Bartholomew on the first day of his visit on August 20.

â€œFirst of all, I want to thank you for this visit,â€ Zelenskyy said. â€œFor me, for Ukraine, for all of us, it is a great honor that you join us on such important days as we celebrate the 30th anniversary of our independence. It is very important for us â€, declared the president.

Patriarch Bartholomew said he was happy to be on the beautiful and hospitable Ukrainian land, especially as Ukraine is celebrating the 30th anniversary of its independence.

â€œIt is a great honor for us to celebrate with you this important date for Ukraine,â€ said Patriarch Bartholomew.

During his conversation with Patriarch Bartholomew, Mr. Zelenskyy noted that Ukraine is an example of a country in which many religious denominations peacefully coexist.

The two men discussed the issue of a peaceful settlement of the conflict in Donbass, violations of fundamental human rights and freedoms, in particular freedom of religion, in the temporarily occupied territories of Ukraine. Mr. Zelenskyy noted that one of the factors Russia uses against Ukraine as a hybrid weapon is religion.

Mr. Zelenskyy thanked the Ecumenical Patriarch for the care and support given to the children of Ukrainian soldiers who lost their parents as a result of Russia’s ongoing aggression against Ukraine.

“I know how warmly you met them in your residence in Fener [the neighborhood in Istanbul in which the ecumenical patriarchy is located] in 2018. I appreciate your willingness to meet them [again] during your visit, â€Zelenskyy said.

The first day of Patriarch Bartholomew’s visit to Ukraine began with a tribute to those who died fighting for the freedom and independence of Ukraine, as well as to the victims of the Holodomor-genocide of 1932-1933. On August 21, Patriarch Bartholomew met with Metropolitan Epifaniy, primate of the Orthodox Church of Ukraine, according to the press service of the Ukrainian Orthodox Church.

Meanwhile, the Russian Orthodox Church has opposed Patriarch Bartholomew’s visit to Ukraine, arguing the trip could spark a possible confrontation between the two churches. The Church of Moscow, which regards Ukraine as its canonical territory, unlike the canons of the Church, does not recognize the decisions of the Ecumenical Patriarch. He severed ties with hierarchs or churches that recognized the independent Ukrainian Orthodox Church.

The Moscow Patriarchate is concerned that after Patriarch Bartholomew’s visit to Ukraine, the churches under the authority of Moscow will come under the jurisdiction of the Ukrainian Orthodox Church.

The Moscow Church claimed that Patriarch Bartholomew destroyed all Orthodox unity in an attempt to obtain what they said was unprecedented authority.

â€œBefore our eyes, a completely different model of world orthodoxy is being formed, in which the central place is prepared for the Eastern Pope with unprecedented powers and privileges,â€ said Metropolitan Anthony (Pakanich) of Ukrainian Orthodox Church of the Moscow Patriarchate.

“The adventure of Patriarch Bartholomew in Ukraine in its consequences goes far beyond the dispute over jurisdiction over a certain territory,” Metropolitan Anthony said.

Meanwhile, the Ukrainian World Congress (UWC) welcomed the visit to Ukraine of Patriarch Bartholomew, who played a crucial role in securing autocephaly from the Ukrainian Orthodox Church.

On August 23, Patriarch Bartholomew met with members of the All-Ukrainian Council of Churches and Religious Organizations.

Metropolitan Epifaniy told Patriarch Bartholomew that after years of coexistence of Christians of different faiths, as well as Muslims and Jews, and after many years of anti-religious persecution, a unique interfaith atmosphere has developed in Ukraine .

The council has been in existence for 25 years and works to promote peace and mutual understanding in Ukraine. As a result, representatives of different religious communities can collaborate on the basis of mutual respect and equal rights, overcoming contradictions and finding consensus despite differences of opinion.

According to the press service of the Ecumenical Patriarchate of Constantinople, Patriarch Bartholomew is known to the world as â€œthe one who builds bridgesâ€ largely because of his many years of experience in inter-Christian and inter-religious dialogue. He stressed the role of the Church in resolving contradictions in society, as she can “use the oil of faith to heal and heal the wounds of others, not to kindle new fires of hatred.”

“It is a sign of hope that despite the horrors of the 20th century, the most brutal era in human history, our understanding of dialogue will become an increasingly important tool for building bridges. and be reconciled, â€said Patriarch Bartholomew.