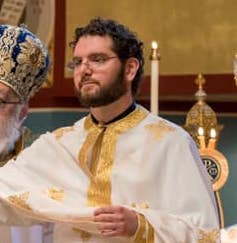 Cremation and the Orthodox Church

It is incompatible with the teachings of the Orthodox Church to practice cremation.

We need to remember several things.

1) The pagans practiced and practice cremation. The pagan Greeks had practiced cremation, but when the Greeks became Orthodox Christians, this practice ceased. The appropriate traditional practice to honor the deceased is burial.

2) Please know that the ancient and traditional practice of the Jews, as received from the Old Testament, is burial and not cremation.

3) The body is not bad. The material is not bad. Creation is not bad. The body is not a prison for the soul. The body is created by God. God himself took upon himself a human body, mind and soul. God became man to save body and soul together. Our bodies belong to God. We are called to be temples of the Holy Spirit. The bodies of the saints were and are temples of the Holy Spirit. The grace of God worked through the bodies of the saints. To this day, the bones and even the clothes of the saints have had miraculous grace and power. In fact, there are Saints whose whole bodies are intact, whose bodily remains have not decayed and been mummified, after years, after centuries – for some, after many, many centuries at this day. Examples of such saints are Saint Spyridon on the island of Kerkyra (Corfu) who rested in the 300s (!), Saint Gerasimos on the island of Kefalonia, Saint Dionysios on the island of Zakynthos, Saint John the Russian on Evia Island, Saint Savas the Sanctified at the Monastery of Saint Savas in the Holy Land, Saint Euphemia the Great Martyr at the Patriarchal Church of Saint George at the Phanar in Constantinople, Russian Saint John Maximovitch in San Francisco, California, and Russian Metropolitan Philaret at Holy Trinity Monastery in Jordanville, New York.

One of the hands of Saint Mary Magdalene is intact and is in the monastery of Simonopetra on Mount Athos. I saw with my own eyes an uncorrupted hand of a Saint Efthimios which was in the Russian monastery of Saint Panteleimon on Mount Athos. I was also lucky enough to be in the presence of the relics of Saint Demetrios the Great Martyr in Thessaloniki, which have given off a fragrant, celestial substance called myrrh for centuries to the present day. The tomb and relics of Saint George the Great Martyr at Lydda in the Holy Land also exude myrrh. The relics of Saint Nicholas the Wonderful emit agiasmos (holy water).

What if we had cremated all these Saints? Can you imagine all the blessings the world would have missed?

Moreover, we Orthodox Christians bury our dead in the cemetery. The word cemetery comes from the Greek word κοιμητήριον (koimitirion), which comes from the word κοιμάμαι (koimamai), which means “I sleep”. The cemetery, the koimitirion, is the place of those who sleep, awaiting the resurrection of the dead. Death, according to Saint John Chrysostom, of which we make the Divine Liturgy almost all year round among the Orthodox, is considered a little sleep. Sleep is like a little death, and death is like a little sleep. If we don’t fear sleep, then we don’t have to fear death, according to Chrysostom. This is why, in the cemetery, the deceased wait for the resurrection of the dead, when they will rise and meet Christ who will come, as the Tradition of the Church has it, with His Holy Cross in front, like lightning in an instant, from the east. This is why we traditionally bury our dead facing east. The body will be resurrected with a glorified body, like the body of Christ after the resurrection, not some kind of zombie.

6) When we have the funeral services of the Orthodox Church, it is with the hope of the Resurrection that the liturgical service is imbued. Some hymns are written as if the deceased were addressing us all. There are funerary hymns of the Orthodox Church which were written by Saint John of Damascus, the great defender of icons who wrote the well known and much loved hymn of “Christ is Risen”, Χριστός ἀνέστη (Xristos Anesti) , which we sing on Pascha and during Easter time.

If a deceased person dies just before or during the Easter season, the cremated person misses the hymns of the Saint who wrote “Christ is risen”. The cremated person would miss the Paschal hymns that are sung during Bright Week, the week after Easter, which is especially joyful and resurrectional. The cremated person would be deprived of the psalmody of “Christ is risen” during the entire Easter period until the Feast of the Ascension. During the Easter season, “It is the day of the resurrection” is also sung, as the body is carried outside the church to the place of burial.

7) A cremation puts both the deceased person, their family and all those who are grieving in a difficult position. A cremation deprives a person of all the prayers and liturgical offices of the Church. A cremation removes these sources of comfort and consolation for those who mourn such loss.

When an Orthodox Christian leaves this life, we normally have the funeral service, funeral service, trisagion prayers for the deceased, memorial services, preparation of kollyva (boiled wheat) and commemoration of the deceased during the Proskomide, which is , during the preparation of bread and wine for Holy Communion for the Liturgy; to benefit the souls of the deceased. We know from the apostles and from the experience of the saints of the last 2000 years that the prayers of the Church greatly benefit the Orthodox deceased. It is a mystery, but we know that souls are greatly helped, especially by the Divine Liturgy. These actions of the Church, offered in love, can even, by the grace of God and if the Lord wills, snatch the person from the clutches of the evil one. It’s already arrived.

The kollyva (boiled wheat) is a symbol of the resurrection, coming from the Lord in the Gospel of John. Christ tells us, “Except a grain of wheat fall to the ground and die, it remains alone; but if it dies, it produces much fruit” (John 12:24).

The loss of a loved one is painful, but we are called to mourn and cry with hope, trusting in the Resurrection. Even having the casket open, as it is traditionally done, helps in the grieving process for survivors. All these liturgical actions and prayers are means by which the Church helps the souls of the deceased. All these liturgical actions and prayers also help mourners to place the souls of deceased loved ones back into the hands of God.

8) The process of cremating someone is particularly gruesome. The body is burned. The bones remain and are then pulverized, and the ashes and dust of the bones are not entirely given to the family. Do we really want our loved ones and families to go through a process like this, burned and pulverized? Would we rejoice if our loved ones died and were in a fire or an accident?

9) If there are economic reasons for having a cremation, remember that a large, fancy casket is not necessary. Flower arrangements are not necessary. Remember that Orthodox parishes, priests, organizations and others will try to help ease the financial burden if made aware of a particular situation where money is an issue. These things can also be handled with dignity for those involved, dignity for the deceased, and appropriate confidentiality.

10) Also know that an Orthodox Christian cannot have a funeral and then be cremated. This goes against everything we have received from Holy Tradition and is unfortunately, perhaps not the intention of some but nevertheless the end result, disrespect and spitting on all our ancestors, both by heritage only by Faith, who in their simplicity have tried to live Christian lives, with Christian ends to their lives.

11) Once again the Church welcomes repentance. The Church welcomes a change of heart. The penitents also became saints, even great saints of the Church. There can be no repentance after death for the person who has been cremated. For these cremated people, we pray for God’s mercy and love for them. For those who can repent on this side of life, one is called to feel only remorse but also to resolve that cremation will not take place once more, more and for oneself- same. For those on this side of life, they can always make the decision not to be cremated.

——
It seems from my limited experience that the Orthodox Church is one of the last bastions for Christian funerals and burials. Unfortunately, although not universally, there are Christians of various Protestant and even Catholic backgrounds who practice and encourage cremation. For what it’s worth, a common witness to the Resurrection is certainly set aside when Protestant and Catholic Christians alike practice cremation.

From what I also understand, in Japan, because the civil registry requires cremations for everyone, cremations happen even for Orthodox Christians, because it is extremely difficult to obtain a burial. This is the exception in worldwide Orthodoxy, not the norm, and it appears state law enforced would be one of the few exceptions where a cremation can take place, per Church guidelines.

May the Risen Lord guide and enlighten us all!

The repatriation of the cultural heritage of Cyprus