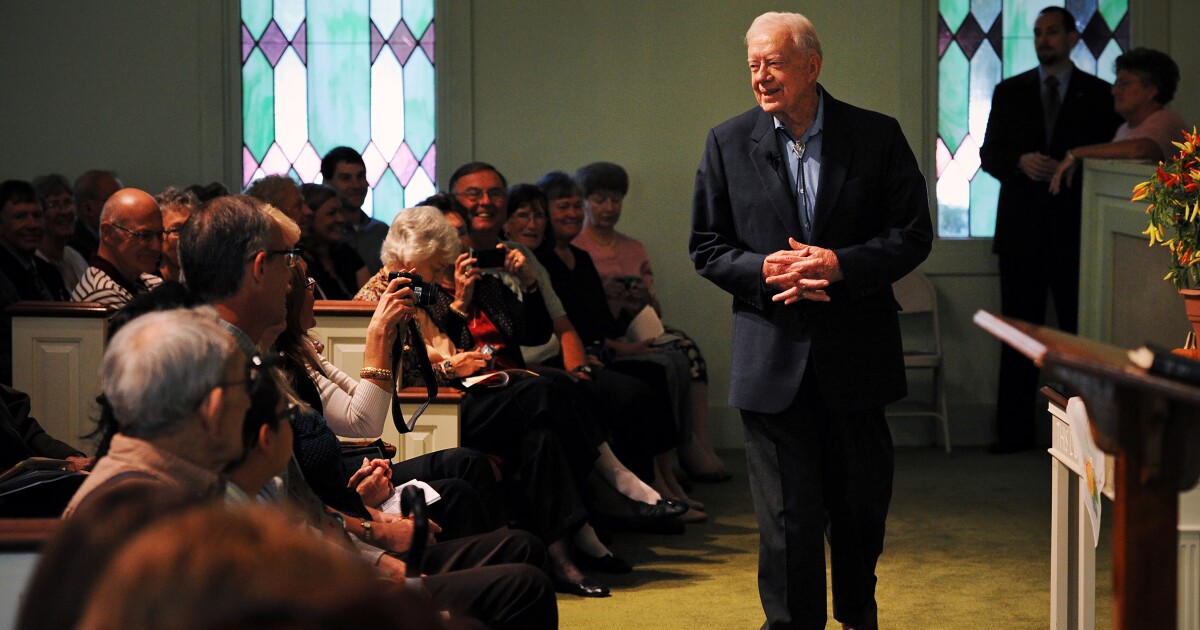 Joe Biden was the first US Senator to support Jimmy Carter as president in 1976. Now, as his presidency begins in earnest, Biden could do worse than emulate his old friend.

In politics, Carter could be ruthless. Gonzo journalist Hunter S. Thompson wrote that he believes the Georgian to be one of the “baddest men” he has ever met. Thompson meant that Carter was ready to do anything to be elected.

During his run for governor in 1970, for example, Carter presented himself as a populist, appealing to both white and black voters. But he was perfectly willing to send clever dog whistles of support to poor rural whites who were abandoning public schools for all-white private â€œacademiesâ€. Then, on the day of his inauguration as governor, he shocked those same white people by bluntly proclaiming that â€œthe time of racial discrimination in Georgia is over.

In 1974, as he quietly began to launch his unlikely presidential campaign, he delivered a speech in the presence of Senator Edward M. Kennedy – at the time, his main rival – in which he made it clear that he could hold his own against Camelot’s heir. “Carter shot him that day,” observed writer Garry Wills, “deftly, politely, but without a doubt.” Kennedy decided not to run in 1976.

Forty years after leaving the Oval Office, most Americans associate the most enigmatic of our presidents with his humanitarian projects on behalf of Habitat for Humanity or his efforts to eradicate Guinea worm disease in Africa. Experts joke that he is the only ex-president to have used the White House as a springboard to more worthy achievements. We don’t see him as a shrewd, pragmatic, or ruthless politician.

It is a mistake. Carter had an odd political sense, which meant he knew exactly what voters wanted to hear. He proved it by the fact that he got himself elected president as a liberal white man from the South.

But here’s what was unusual about him. Once he took office as president, he repeatedly told his aides that he did not want to hear their arguments on what was politically appropriate. Instead, he was determined as president to use his brain and judgment to determine what was the right thing to do – and to do it, regardless of the political consequences. In power, “Carter thought politics was a sin,” said his vice president, the late Walter Mondale. “The worst thing you could say to Carter if you wanted him to do something was that it was politically the best thing to do.”

Despite his aversion to political machinations – such as making deals with malicious members of Congress – Carter was an efficient and extraordinarily productive president. He deregulated the airline industry, allowing middle-class Americans to fly. It forced automakers to agree to mandatory seat belt and airbag technology regulations, saving at least 9,000 lives a year. He transformed the judiciary, appointing more African Americans and Latinos to the federal bench than all of his predecessors combined. He added millions of acres to America’s wilderness reserves.

In foreign affairs, he secured Senate ratification of the Panama Canal Treaty, negotiated a SALT II arms control agreement with the Soviet Union, and personally negotiated the Camp David accords. The principle of human rights has become the cornerstone of American foreign policy. He ignored the Cold War shibboleths, shocking the expert class by proclaiming: “With confidence in our own future, we are now free from that inordinate fear of communism that once led us to embrace any dictator who has joined us in our fear. “

But Carter’s accomplishments came at enormous political costs. Seven Democratic senators lost their candidacy for re-election thanks to their votes for the Panama Canal Treaty. Big Oil and the Detroit auto industry defeated his windfall tax claim and heavily funded his Republican challenger, Ronald Reagan, in 1980. The unions opposed his deregulation of airlines, trucking and railroads – and in 1980 it won only a small majority. voters in union centers.

A born-again Christian, Carter won the evangelistic vote in 1976, but lost it in 1980, largely because he revoked the tax-exempt status of all-white Christian schools. In 1980, he became the only modern Democrat to lose a majority of Jewish votes because he had pushed the Israelis so hard to stop building settlements in the West Bank.

Despite being from Georgia, he lost two-thirds of voters in the old Confederation when he ran for a second term.

Here’s Jimmy Carter’s paradox: He was a ruthless politician who knew how to gain power, but after conquering the presidency, he felt free and free to do only what was right in his personal judgment. In this he was philosophically guided by Reinhold Niebuhr, his favorite theologian, whose book “On Politics” was his own “political bible”. Realistic and skeptical of human nature, Niebuhr argued that those who are privileged enough to exercise political power have a responsibility to use their power in the name of justice. Carter has frequently cited Niebuhr’s injunction that it is “the sad duty of politics to establish justice in a sinful world.” He became a Baptist from southern Niebuhrian – a rather peculiar church of a devotee.

For Carter, who is 96 years old today and lives, as always, in Plains, Georgia, doing the right thing was the only justification for his unleashed political ambitions.

Justice was both the key to his success and his greatest weakness. This explains his achievements but also why he was not reelected. And as much as he hated losing, he had no doubts that he had done the right thing.

He was a most unusual president, whom none of his successors imitated. Look at one of the pictures of all the ex-presidents standing together. Carter is still on the sidelines, very slightly socially distanced. The images suggest a certain suspicion; they are worried in his presence, suspecting that he is judging. He’s not one of them; it is the outlier.

Joe Biden, however, has a long-standing friendship with Carter and made a pilgrimage to the Plains during the 2020 campaign. We’ll have to wait and see if that means he sees Carter as a president to emulate.

Kai Bird is a Pulitzer Prize-winning historian, the director of the Leon Levy Center for Biography at CUNY, and the author of “The Outlier: The Unfinished Chairman of Jimmy Carter”.