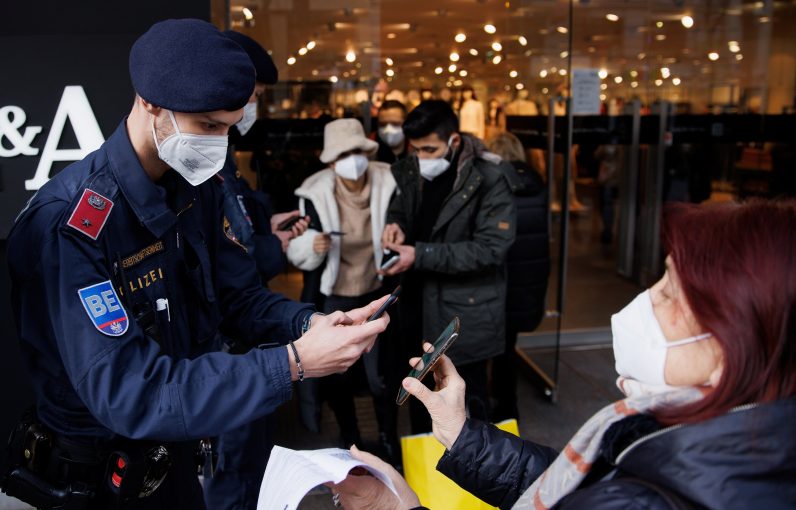 A 10% increase in deaths, mostly from the delta variant, was reported across Europe in the first week of November, amid warnings from the World Health Organization that the continent could see half a million dead in the coming months.

Many institutions, including universities, require 3G certificates – proving that people are vaccinated, cured of COVID-19, or tested – as a condition of entry and participation.

Hospitals are reported to be flooded in Bulgaria, where less than a quarter of citizens have been vaccinated, as well as in neighboring Romania, which currently has the world’s highest COVID-19 death rate per capita.

In an October 30 statement, the Orthodox Archdiocese of Bucharest said it had accepted a request from the Romanian Ministry of Health and opened chapels as temporary morgues, while Catholic bishops in eastern Romania urged Christians in a message of October 29 to “pray, be vaccinated and strictly observe all necessary measures.

In a November 17 interview with Catholic News Service, the Secretary General of the Latin Rite Catholic Bishops’ Conference in Romania, Mgr. Francisc Ungureanu, said the dioceses in his church had listed aid centers, at the request of the government, on their websites, adding that all bishops and most priests had accepted vaccines as a “necessity for work. with people”.

â€œMany of the clergy have been sick with the virus and are still not fully recovered, but we are confident that the situation will improve,â€ said Mgr. Ungureanu said.

â€œWe were ready from the first days of the pandemic and made our religious facilities available for help and solidarity with the sick. People accept the security measures that remain mandatory in our churches, and there is no suggestion that vaccination certificates are made mandatory. “

In Poland, restrictions on attending Mass were lifted this summer, after Archbishop Stanislaw Gadecki, president of the episcopal conference, accused the government of violating the constitution and treating the church worse than under the regime. Communist.

However, in Austria, where a lockdown was ordered on November 15 for all unvaccinated people over the age of 12, the bishops’ conference tightened its rules on November 13, making masks mandatory as well as new disinfection measures, ventilation and distancing.

Although the Austrian government’s new ordinance on COVID-19 protective measures exempts “gatherings for the practice of religion”, anyone performing services must now hold a 3G certificate, while the rules on singing, confessions and fellowship were strengthened in accordance with detailed church guidelines.

In neighboring Slovakia, church websites provide information on nationwide risk levels, while bishops urged citizens in a November 14 message to get vaccinated as “a concrete and mature expression of faith in God “.

â€œOur Christian community should take the right position at this important time – as the Holy Father said, vaccination is a manifestation of love for neighbor,â€ the message adds. â€œWe urge priests to spread the right message and encourage vaccination while respecting the rules of hygiene. It is also a true manifestation of our conscious and coherent attitude towards life. “

In Ukraine, where less than a fifth of the population of 43.3 million is fully vaccinated, the Ukrainian Catholic Church opened the Resurrection Cathedral in Kiev as a vaccination center on November 7 and offered treatment space in churches in five other cities. Orthodox and Adventist churches across the country have since made similar offers, in what Health Minister Viktor Lyashko hailed on Nov. 16 as “an example of constructive dialogue and the fulfillment of social mission.”

Further south of Croatia, Byzantine Bishop Milan Stipic of Krizevci warned of growing divisions over vaccinations among church members in a pastoral letter of November 17 and urged Catholics to face up to the pandemic by “returning to the values â€‹â€‹of Christian life and to a genuinely evangelical way of thinking”.

â€œScience and medicine are not absolute – they are not dogma or a matter of faith, nor is vaccination,â€ the bishop said. â€œBut I accept what experts recommend to treat particular illnesses, and I respect all those who make daily sacrifices in hospitals for the sick. We have no right to ignore their efforts, defending our own opinion to the point of accepting conspiracy theories.

In Eastern Europe, vaccine resistance is believed to reflect a lingering post-communist distrust of government guidelines. Infection rates are high in Russia as a bill making vaccinations compulsory for medical staff and teachers passes through the State Duma.

In a November 2 statement, the Moscow Orthodox Patriarchate warned against making vaccinations “a factor of national division,” adding that the church would not require vaccination certificates.

However, in Greece, where unvaccinated citizens are required to test negative to enter shops and restaurants, the Orthodox Church has ordered unvaccinated clergy and parish staff to undergo two tests per week and “paternally urged “Christians to get tested before attending services.

Indians in the United States can now refinance their student loans