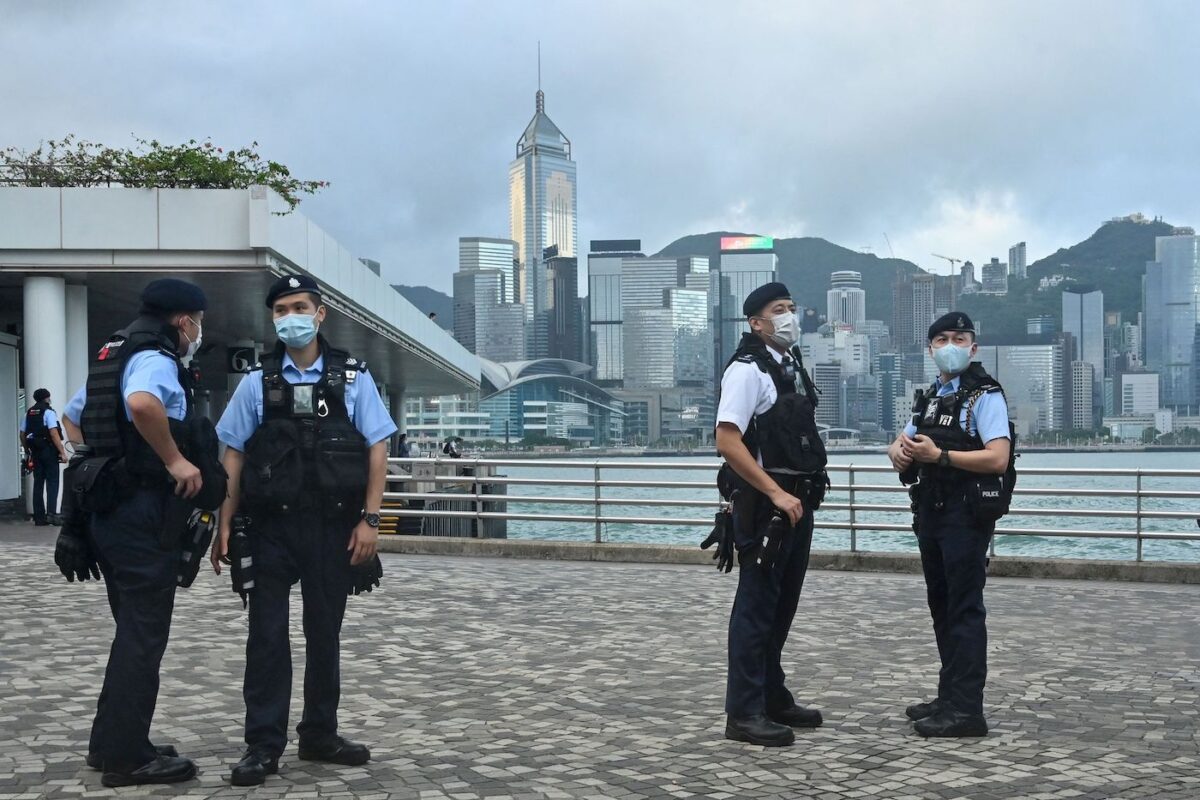 There was a heavy police presence on the streets of Hong Kong on October 1, the 73rd anniversary of China’s fall to the Chinese Communist Party (CCP). Marked as the National Day of the People’s Republic of China by the CCP, communist flags flew across Hong Kong as across the world in Manchester, UK, large crowds of exiled Hong Kongers gathered to protest against the loss of freedom in the city of their birth.

The UK-based HK Indigenous Defense Force and the Manchester Hongkonger Association joined forces at the rally in St. Peter’s Square to call for global resistance against the CCP and its authoritarianism.

The rally began with speeches from guests, followed by a march that included many young people and families from Hong Kong, chanting slogans such as “Say no to China”, “Hong Kong is not China”, “Free Hong Kong,” “Fight for freedom, support Hong Kong.”

A spokesperson for the Hong Kong Indigenous Defense Force said that according to local police, the number of participants in the rally reached 1,200.

Former Hong Kong District Councilor To-Ka Lun spoke in fluent English and said, “Freedom is not free. Freedom does not come freely. Indeed, freedom is very expensive. As the CCP celebrates its National Day, it is a day of mourning for HK people who are scattered overseas due to the CCP’s oppression.

Hong Kong activist Finn addressed the rally via video and called for an end to the Sister Cities program with China to resist CCP influence.

He further pleaded for Hong Kongers to remind Western countries that the CCP can never be trusted, and that dismantling the Party’s economic resources and legitimacy internationally is the only way to defend freedom.

Dr. Lit, a traditional Chinese medicine doctor from Hong Kong, had a Ukrainian flag on his shoulders.

He said that on the CCP’s “National Day” on October 1, he can only remember the martyrdom of protester Marco Leung and the incident when Hong Kong police opened fire on a protester.

Other participants in the rally chanted the call for the end of the CCP. Dr. Lit encouraged the audience to never give up and to have faith and fight.

Political commentator Ching Cheong spoke at the rally and said the CCP has historically relied on three pillars to seize power: violence, deception and collusion with foreign powers.

Cheong spoke of the violence of the 1950s and 1960s when the CCP incited followers to riot and seize private lands without any compensation and kill all so-called “counter-revolutionaries” such as “landowners and the capitalists”.

An example he gave of the CCP’s early use of violence to seize power was the CCP’s Hunan Provincial Committee which issued orders to kill anyone deemed a “counter-revolutionary.”

Cheong said deception was the second tool used by the CCP and gave an example of how Mao Zedong told a Reuters reporter in 1945 that he wanted to build a new, free and democratic China.

Cheong said such a beautiful lie had fooled a generation of Chinese people as well as the United States and other Western nations.

He then talked about the CCP’s collusion with foreign powers, with the Soviet Union in particular, helping the CCP grow stronger in the 20th century. In order to win support from the Soviet Union, the CCP was prepared to give up 150 million hectares of land that Soviet leader Vladimir Lenin had previously said three times he would return to China.

Even during World War II, the CCP cooperated with Japan to sabotage the Republic of China at a time when the Communists were supposed to fight the Japanese invasion together with the Chinese Nationalist government. The CCP would cooperate with the Japanese military in exchange for their forces not invading CCP-held territories.

The CPC relied on these three pillars to seize and consolidate power, and gradually these characteristics became intertwined in the Party’s DNA, he said.

Since the CCP took power in China, as many as 40 million Chinese people have died because of the CCP’s policies, Cheong said. In the 73 years since the founding of the party, the CCP’s lies have never ceased, and from Hong Kong’s perspective, the Party has violated all promises of Hong Kong’s Basic Law. These points demonstrate the illegitimacy of the regime, he said.

“Transformed into an unfree society”

Cheong further called on Hong Kongers in exile to use their own experiences as examples to show the world the true nature of the CCP.

“Since the handover to China, Hong Kong has shown the world a textbook case of how a once-free metropolis has transformed into an unfree society within 25 years,” Cheong said.

“Once a haven for mainland Chinese seeking freedom, it now produces its own political refugees who are scattered around the world. If the world continues to appease the CCP, the free world will enter a crisis. »

Early in its history, the CCP took advantage of people’s discontent with society, using it to defeat their opponents while becoming the voice of China. After the CCP took over China in 1949, its only expertise seemed to be indiscriminately killing the Chinese people.

During the land reform movement, the Korean War, the Great Leap Forward, and the Cultural Revolution, the CCP’s reign of terror only resulted in massacres and extreme poverty.

After the Tiananmen Square Massacre in 1989, the CCP took advantage of China’s cheap labor to persuade Western countries to fully open their markets while successfully joining the World Trade Organization (WTO). ).

However, the Chinese regime has secretly worked to commit intellectual property theft around the world. Using “one country, two systems” lies to deceive Hong Kong, the CCP signed the Sino-British Joint Declaration that led to the UK ceding Hong Kong to China in 1997.

Hong Kong Independent Alliance leader Wayne Chan told rally attendees at the end: “It’s hard to imagine what will happen next month or next year. What we can do is live with no regrets and with dignity, and hope that we will not forget our love for Hong Kong and for our people.