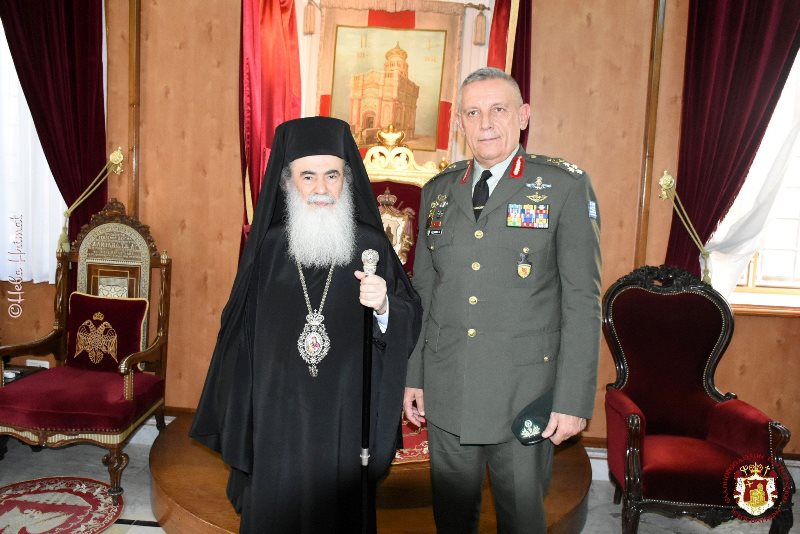 On Wednesday, June 8, 2022, the Chief of the General Staff of the Hellenic National Defense Constantinos Floros visited the Patriarchate of Jerusalem, accompanied by his wife Anna-Maria Tsirikoni and his collaborators.

The group was received by Patriarch Theophilus of Jerusalem and the Hagiotaphite Fathers.

Floros said he felt honor and piety as this was his first visit to the Holy Land and the Patriarchate of Jerusalem.

The Patriarch of Jerusalem explained to the Chief of the General Staff of Hellenic National Defense and his collaborators the importance of Jerusalem and especially of the city within the walls, whose heart is Golgotha, the Holy Sepulcher, and the Church of the Holy Sepulcher which was built by Saint Helena.

The Patriarchate of Jerusalem is the guardian of these sanctuaries, along with the Hagiotaphite Brotherhood. This mission of safeguarding the Holy Places has been carried out by the Patriarchate and the Hagiotaphite Brotherhood since the Byzantine Christian era and from the year 638, the time of the Arab occupation with the Patriarch Sophronios, and of the Ottoman occupation to our times. days, over three States, of Israel, the Palestinian autonomy, Jordan and Qatar.

Through divine power and the power of its history, the Patriarchate pursues its peacemaking and conciliatory mission, it confronts and overcomes the recent challenges against Christians. The role of the Patriarchate is also to bring unity among the Orthodox Churches, especially in the current circumstances.

General Floros thanked the Patriarch of Jerusalem for his informative words and asked for his prayers for the strengthening of the Hellenic Army, especially in the current political conjunctures.

For this visit, Patriarch Theophilus presented the general with a cross and a book of the history of Jerusalem by Blessed Archbishop Chrysostom Papadopoulos, a silver painting of Jerusalem, and an icon of the Theotokos, and blessings from Jerusalem for members of the band.

Floros presented the Patriarch of Jerusalem with a Board of the General Staff of National Defense and the book “Τα εθνικά Ευαγγέλια του Ιερού Αγώνος”.

Asking for the blessing of the Patriarch, the Delegation led by Floros left to venerate the Holy Sepulchre.