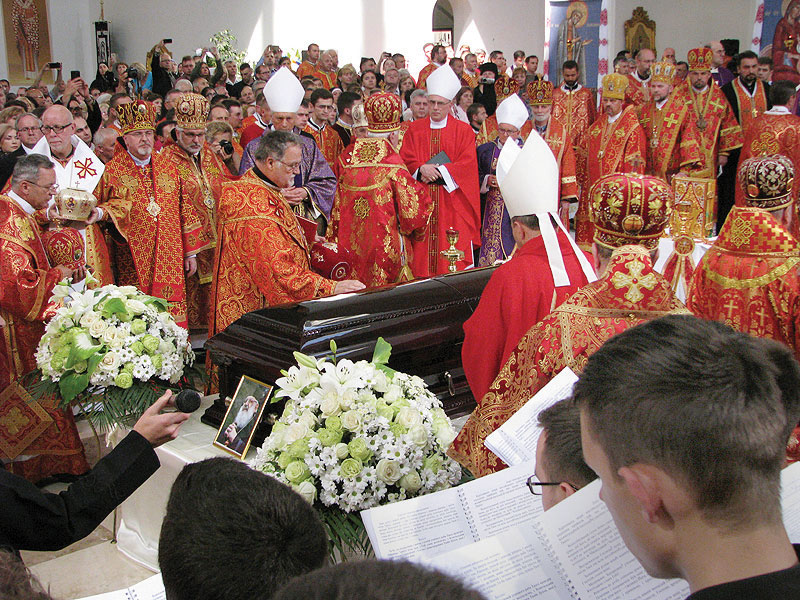 PARSIPPANY, NJ – The funeral for Cardinal Lubomyr Husar, the former primate of the Ukrainian Greek Catholic Church (UGCC) who died on May 31, took place in Lviv and Kiev from June 1-5.

The divine liturgy and funeral rite of Cardinal Husar took place at the Patriarchal Cathedral of the Resurrection of Christ in Kiev on June 5. The Hierarchs of the UGCC participated in the service led by Patriarch Sviatoslav; Bishop Cyril Vasil, secretary of the Congregation for the Oriental Churches, who attended the services as the personal envoy of Pope Francis; and the apostolic nuncio in Ukraine, Monsignor Claudio Gugerotti.

About 600 priests, dozens of monks and faithful from all over Ukraine and abroad came to pay their final homage to Cardinal Husar, who was revered as the Patriarch of the Church. Many public figures, government officials and politicians came that day to honor the former head of the UGCC at the Patriarchal Cathedral.

On June 4, following a procession to the cathedral, the coffin bearing the body of the Head of the Church was placed in the center of the building. After the service, thousands of people came to pay their last respects to His Beatitude Lubomyr; many cried openly. The doors of the cathedral remained open, whether it was day or night, and vigils of prayer were read in the coffin.

In their farewell speeches, the clergy remembered the former Major Archbishop with warmth and love. The words of Patriarch Sviatoslav were particularly moving. Speaking of the former patriarch of the UGCC, his successor called him the â€œkobzarâ€ of the new Ukraine and the â€œsoul of every Ukrainianâ€.

Referring to the â€œuniqueness of the holiness of Lubomyr,â€ Patriarch Sviatoslav said: â€œWe see that the power of God is manifested in his weakness; when he lost his physical sight, his spiritual eyes opened even more. Everywhere he entered, everyone stood up.

â€œAnd the kobza that Lubomyr played is the soul of each of us, of each Ukrainian, regardless of religion, faith, place of residence or language. With his velvety baritone he could touch our sensitive strings so that even in Lugansk, Donetsk, Symferopol, Ukraine and abroad our hearts were moved, â€he said.

Lviv devotees, including members of the Ukrainian Scout Organization Plast with their flags, gather for memorial services.

According to the current head of the UGCC, Cardinal Husar left as a legacy to the faithful the foundations of a modern Ukrainian Christian civilization, with which “we must develop and live in conformity, and build on it our independent and free Ukraine”.

The cardinal’s body rests in the crypt of the Patriarchal Cathedral. The site is still open, and the faithful will still be able to visit and pray with their pastor. Patriarch Sviatoslav called on Ukrainian Catholics not to forget their spiritual father in the future and to visit the crypt as often as possible.

â€œEach of you, in times of doubt or need, should be able to come and pray with Lubomyr. Let us give our word never to leave Lubomyr alone in the crypt, â€Patriarch Sviatoslav said in his sermon.

During the memorial service, worshipers were seen outside the Patriarchal Cathedral holding a banner with the slogan â€œSubito Santo! (Holiness now).

Outside the Patriarchal Cathedral, a group of worshipers hold a banner with the inscription â€œHoliness Now! “

Cardinal Husar’s funeral began on June 1, when the coffin with his body was brought to St. George’s Cathedral in Lviv. The church was open to the public and people lined up for several hours to bid farewell to their beloved pastor. A large screen was installed for the faithful in the square in front of the cathedral, on which a film about Cardinal Husar and an interview with him were shown.

On June 3, during the liturgy in St. George, Patriarch Sviatoslav declared His Beatitude Lubomyr “the pleading of the nation for peace in Ukraine”. Subsequently, a mourning procession made its way through the streets of Lviv.

Thousands of Lviv residents accompanied the coffin bearing the body of Cardinal Husar from St. George’s Cathedral to St. Michael the Archangel Church. Patriarch Sviatoslav compared Cardinal Husar’s last pilgrimage through the streets of Lviv to the funeral of Venerable Metropolitan Andrey Sheptytsky, who led the Ukrainian Greek Catholic Church in 1901-1944.

A view of the two hour mourning procession in Lviv.

Young people marched at the head of the procession, carrying the cross and banners. They were attended by seminary students, monks and nuns from various religious orders. Church hierarchs led by Patriarch Sviatoslav followed the vehicle carrying the coffin.

Government officials and worshipers from various towns and villages in western Ukraine also participated in the two-hour funeral procession.

At St. Michael’s Church, Patriarch Sviatoslav addressed everyone present on behalf of His Beatitude Lubomyr. He addressed the seminarians of Lviv, as well as the students and professors of the Ukrainian Catholic University; he thanked the Ukrainian soldiers and the authorities.

He stressed the importance of the day’s events: â€œThis day will go down in history. You will be proud to tell your children and grandchildren that you participated in this eventâ€¦ Today, His Beatitude says goodbye to you. In some time he will leave for Kiev to be put to eternal restâ€¦ where our church in Kiev was born.

The legacy of Patriarch Lubomyr

Patriarch Sviatoslav, addressing participants in the memorial ceremonies of his predecessor, noted that when His Beatitude Lubomyr lost his sight, he became even more influential in Ukrainian society. â€œHis presence will influence our progress in the future. â€¦ He was a true moral authority. His heritage cannot be overstated.

The floor is Archbishop Cyril Vasil, secretary of the Congregation for Oriental Churches, who attended the services as the personal envoy of Pope Francis.

Speaking at a press briefing in Kiev, Patriarch Sviatoslav said: â€œHis Beatitude Lubomyr was a very modest person, he did not like to draw attention to himself. He did not leave any kind of written spiritual testament. But, I believe, he left us as much of a legacy as his legacy: his wisdom, his humor – even about himself – and his optimism. Now it is our duty to collect, save and enrich this spiritual heritage as its testament. “

Condolences on the death of Cardinal Husar came from President Petro Poroshenko, who wrote: â€œI am in sincere mourning with all the faithful of the UGCC and throughout Ukraine. I express deep respect to this brilliant personality and true hero, who courageously proclaimed the word of the Lord to Ukrainians for two centuries at the turn of two millennia.

Patriarch Sviatoslav speaks inside the Patriarchal Cathedral of the Resurrection of Christ.

The Ukrainian president also recalled one of the last talks granted by the Major Archbishop Emeritus, in which he said the following words: â€œPeace is loving one another. Peace is not simply the absence of struggle. Mr Poroshenko added, in accordance with this plea, “we must continue to fight for Ukraine, for peace, for love”.

â€œI firmly believe that now, when he passes away, his prayer for Ukraine, for the Ukrainian people, for our future will be even more powerful. Rest in peace, Lubomyr, â€Poroshenko said.