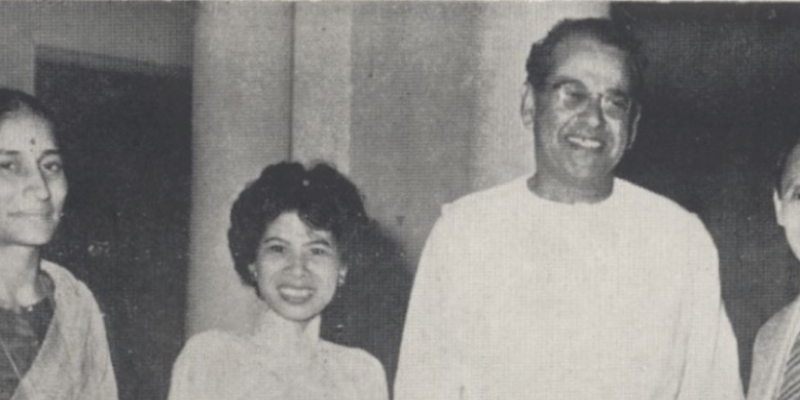 Akshaya Mukul has named the full biography which summarizes various facets of Agyeya’s life as Writer, Rebel, Soldier, Lover: The Many Lives of Agyeya. The book was published by Vintage, part of the Penguin Group. The book is huge not only because it tells a factual and contextual story of the many lives of a faithful writer; it is also huge in size with a total of 565 biography pages and an additional 200 or more pages of reference material.

I believe this is the most documented biography ever written of a Hindi writer. In fact, rarely has a writer been the subject of a biography of such epic magnitude in Indian literature at large. Mukul spent several years writing the book and scoured all possible sources around the world for authentic facts and references.

Writer, rebel, soldier, lover: the many lives of Agyeya by Akshaya Mukul. (Penguin, 2022)

Such refinement and perseverance are rare in Hindi. Very few biographies meet the standard in terms of authenticity, detail, and due diligence to facts and data. Penguin will soon publish the Hindi translation of this colossal biography. For nearly four decades, Agyeya was a dominant figure in modern Hindi literature. He was the most controversial Hindi writer of his lifetime. Countless rumors spread about his personal life. Akshaya Mukul must have known them too. But he told Agyeya’s life story in a very objective way based on references and documents. Its narrative flows like an articulate novel and there’s almost no room for boredom or oddities.

Another little-known love affair between Agyeya and Kripa Sen is probably finding Akshaya and hence Agyeya was rightly referred to as a lover in the title of the book. Besides, Agyeya also wrote poignant love poems.

The book contains a detailed account of Agyeya’s early life, his life in prison, and his own defense of the court case. The arguments and facts presented by Agyeya in his defense gave a glimpse of his future: it was clear that he would defy social and political norms.

To those who continually accuse Agyeya of being an aristocrat and staying aloof from the masses, the biography details how the writer had a close association with, for example, the peasant movement. Later, with Renu, he continuously covered the plight of farmers and failures of administration during the Bihar famine.

Agyeya was almost always strapped for money as he took up writing as a profession at a time when most writers of Hindi literature received very little or no pay. Popular novels like Shekhar earned him a tiny sum in royalties from Saraswati Press. Therefore, Agyeya’s insistence on being paid for his lectures later in his career makes sense.

It should also be noted that when he started receiving money from, say, the Jnanpith Prize, he ventured to form a trust with twice the prize money and spent it on d other writers. Agyeya was probably the first Hindi writer to do so.

Agyeya’s association with the Congress for Cultural Liberty was at the center of another controversy. Although the affiliation is a fact, it is also true that many world famous writers at the time had such connections. Previously, Agyeya had organized a major conference with progressive writers against fascism. Freedom and self-respect were values ​​on which he never compromised. This biography attests to this notion.

Agyeya’s literature, thought and ideological pursuit do not prove his pro-Americanism. Moreover, if it was justified to receive financial assistance from the then Soviet Union to publish books at low cost and to receive the price of Soviet land, then any American aid would also have to be justified. Ironically, both sides were unaware of the Soviet genocide at the time and the United States’ involvement in the subsequent wars and genocide in Vietnam and Korea.

The biography also reminds me of a personal incident that I had almost forgotten. My correspondence and communication with Agyeya started when I was 18 years old. During one of these correspondences, when he was not even 50 years old, Agyeya once expressed his desire to stop writing.

I registered my protest against such a desire and wrote to him that it would be unfortunate and a great loss. I even suggested that Agyeya publish a new collection of poems and include a long essay on his poetic experiences, the problems faced by contemporary poets and “Nai Kavita” or modern poetry.

I even dared to write that Nirmal Verma and Raghuveer Sahay were the most authentic representatives of modern fiction (nai kahani) and modern poetry of the time. I was pleasantly surprised to learn that Agyeya kept this correspondence while I lost the letters I had received from him.

Another aspect of Agyeya emerges from this biography: his connection and interaction with many active members across generations in his time. He also supported many writers in due time. There have also been controversies regarding the writers’ camps organized by Vatsal Nidhi. Akshay Mukul carefully considered them in context and studied the discussions held.

For decades, many left-leaning writers have condemned the Faithful as right-wing, anti-people, etc. This biography makes it clear that unlike most leftists, Agyeya spent three years in prison for participating in the liberation movement. It remained associated with minor movements thereafter. He never took a pro-government or anti-popular position when he was editor of Dinaman and Nav Bharat Hours. On the contrary, he was a democrat and a critic of the government and supported Jayaprakash Narayan in his massive and decisive mass movement.

He shared long dialogues with Muktibodh and in Naya Prateek had even condemned the attack on Harishankar Parsai by Rashtriya Swayamsevak Sangh henchmen.

If one reads this biography with a broad perspective, one gets an intimate glimpse of Agyeya’s life struggle, his self-respect and dignity as an author, and his authentic, if somewhat obscure, existence.

The beginning and the end

Here are the opening lines of the famous award-winning novel by Geetanjali Shree Ret Samadhi (The sand tomb):

“A story is being told. It can be complete, but also incomplete, as all tales are. This particular tale has a border and women who come and go as they please. Once you have women and a border, a story can be written. Even single women are enough. The women are stories unto themselves, full of quivers and whispers that float on the wind, bend to every blade of grass. The setting sun gathers fragments of tales and shapes them into luminous lanterns hanging from the clouds. These too will join our story. The path of the story unfolds without knowing where it will end, weaving right and left, twisting and turning, allowing everything and nothing to join the narrative.

And the last lines:

“But there is no shortage of stories in life, and maybe one day I too will be in the middle of one. There is the moon in the sky which sheds supernatural light. What a beautiful night it is. The gentle breeze blows softly whistling. It is a night full of shadows and sparkling moonlight. The stories go by, where will they cast their net?

I stand outside the window, filled with longing. As if it were no longer a window, but a corner of a canvas that has yet to be filled with color, a place where a plethora of new stories and characters await the moment they will take shape.

Ashok Vajpeyi is a well-known Hindi poet-critic and art lover.

Originally published in Hindi, this piece was translated by Nausheen.