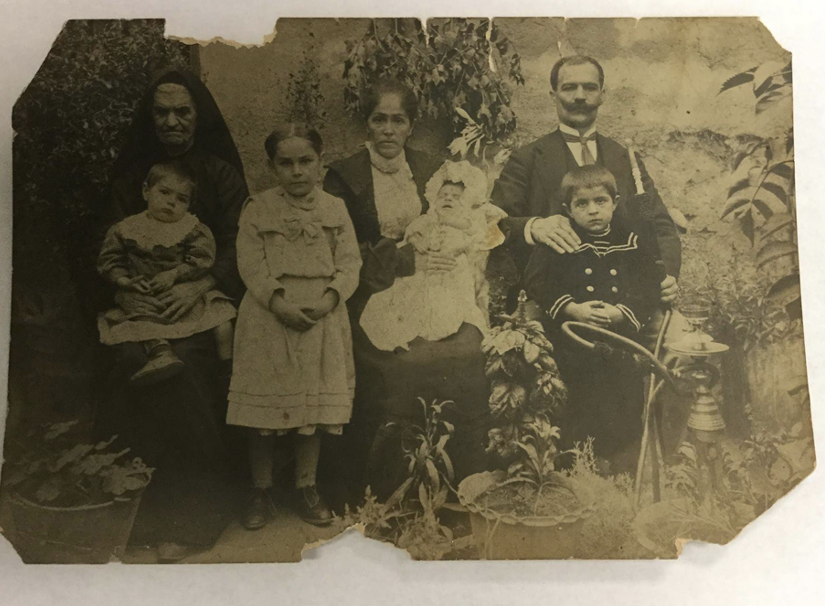 Special for the Hellenic News of America

William Planes was surprised at how little his grandchildren knew about their grandparents.

So he wrote a book.

“Platanides: Through the Eye of the Storm” is the true story of his father, Panayiotis Platanides who, at age 14, survived the 1922 genocide of Greek Christians in Asia Minor.

The story explores the power of the Greek Orthodox faith that helped him and his family overcome and move beyond the atrocities they faced.

“I felt that what I had learned from my father and the experience of these people, our ancestors, was very important to who I had become,” Planes said, when asked why he had written the book.

Panayiotis Platanides was born in 1908 to Fotis and Kyriaki Platanides in Alasehir, Asia Minor, later in Turkey.

The Orthodox Church was always present during his growth due to where they lived and his parents and ancestors were Orthodox Christians.

During the Middle Ages Alasehir was known as the city of Philadelphia and the church was one of seven named by the Apostle John in the Book of Revelations.

Panayiotis, his sister and a brother were baptized in the church of Alasehir.

Two of Panayiotis’s other brothers were baptized at the church in Smyrna, Asia Minor, also one of the churches in the Book of Revelations.

Asia Minor was the epicenter of Hellenism from the early Christian and Byzantine periods until the beginning of the 20th century. This is where the Great Cathedral of Saint Sophia is located.

The family had lived in Asia Minor, the ancestral homeland of people of Greek descent, for centuries.

“They all managed to survive previous conflicts and live with each other,” Planes said in the book.

But then in September 1922, the radical Muslim troops of Mustapha Kemal, Atatürk, victorious in Asia Minor against the retreating Greek army in the Greco-Turkish War, carried out a genocide of Christian Greeks and Armenians in Asia Minor.

At the time, Fotis and Kyriaki wanted Panayiotis to be educated and made arrangements for him to go to his uncle’s home in America, where he would go to college, become a doctor, and return to his family to practice medicine in Alasehir. .

Instead, the town of Alasehir was set on fire and a 14-year-old Panayiotis found himself facing Muslim soldiers who wanted to kill his father, mother and sister.

“How does a 14-year-old boy find the courage to stand up to armed soldiers? He gets it by his faith in Christ,” Planes said.

“My father saw Ataturk come to the Cathedral of Smyrna to desecrate the church. He saw the Archbishop [Chrysostomos] standing in the door and resisting,” Planes said.

The soldiers tortured and murdered the archbishop, who was later venerated and canonized as Saint Chrysostom of Smyrna.

“My father witnessed the martyrdom of a saint,” Planes said.

Panayiotis survived the genocide, he ended up in America.

Other family members, such as Planes’ paternal grandfather, were buried in an immigration camp for two years in Greece before moving to Crete.

Two of Planes’ uncles were sentenced to death by the Gestapo for their role in guerrilla efforts to overthrow the German army in Crete. They were saved by the Armistice.

“The war ended moments before they were executed,” Planes said.

Planes’ maternal grandmother and grandfather had been in America since the early 1900s. His grandfather took a job as a shoe shiner on the streets of Boston, a person who shines shoes, the job of the lowest class you can have, Planes said.

“But my grandfather wanted to feed his family, he worked and did not receive alms.”

During World War II, Planes’ father was able to give his stepfather a job blocking hats and fixing shoes at a store in Times Square.

In high school, he discovered chemistry and physics and entered the University of Miami as a medical student.

He switched to Florida State University at his mother’s request to keep an eye on his sister who was enrolled there. Planes ended up joining the Sigma Chi fraternity and went on to study accounting.

He was missing a course to graduate when he was called up for active duty in the Marine Corps, where he was transferred to a special program with the Navy.

He earned his accounting degree through a correspondence course while on active duty in the Navy.

Planes embarked on acquiring struggling companies, restructuring them, and then reselling them. The profitable work meant that he could invest in many good works for the church.

For his contribution, dedication, and work on behalf of the Greek Orthodox Church, Planes was awarded St. Paul’s Gold Medal.

He was also elevated to the status of Akron Notarios of the Mother Church, Patriarchate and Order of Saint Andrew by His Holiness Bartholomew I, Ecumenical Patriarch of Constantinople.

He and his wife were awarded the 2006 Most Reverend Father Typhon Theophilopoulos Philanthropist of the Year Award and the Gold Seal of the State of Florida by the Board of Trustees of St. Petersburg College for their philanthropic service to the community. of Pinellas County. , Florida.

Planes, who is approaching her 80th birthday, hopes the book will reinforce the idea that faith in Christ can help us overcome all obstacles.

“It was a lesson from my father to his children that no matter what you face in life, if you trust in Christ and believe without a doubt that Christ is with you, you can go through no whatever. That’s what we learned at a very young age and that’s what has marked me all my life.

Planes has now passed on this faith to his daughter Rhea and son William II.

He also hopes that his family’s story will help future generations avoid the tyranny, repression and genocide suffered by his ancestors and give them an appreciation for the fragile freedoms they enjoy in the United States.

“Platanids: Through the Eye of the Storm” is available on Amazon. Learn more here.

I am an evangelical Christian. The government should not promote my religion.