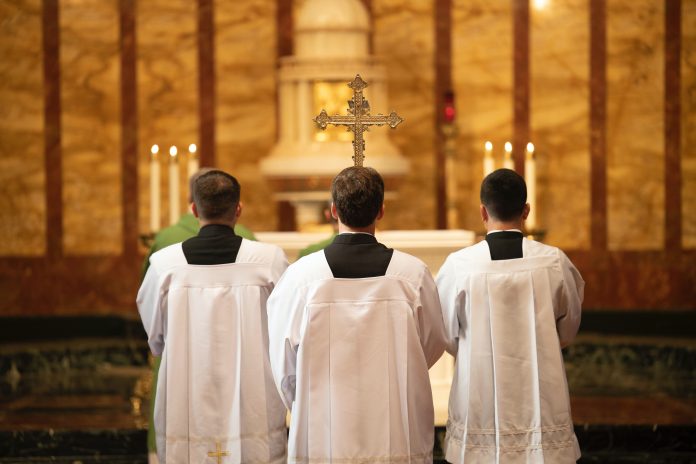 BNN ANALYSIS | A great shortage of pastors. What about those who are not vaccinated against Covid-19? – Baltic News Network

A church service is not the same as a concert for another type of entertainment. That is why the Ministry of Justice hopes that they can be opened to everyone, Minister Imants KrastiÅ†Å¡ told BNN.

As is known, in-person church service is only available to people who have a valid Covid-19 certificate. Many communities have decided to switch to the online service because of this requirement. However, Christmas is near. The celebration of this holiday traditionally involves people who come to church for the Christmas service.

On Monday, December 13, the Operational Management Group met for a meeting. There they discussed the holiday church service, as reported by KrastiÅ†Å¡.

He says the Justice Department has promised the Cabinet of Ministers to vote in favor of extending religious service for all residents until Jan. 11, when the state of emergency is expected to end.

KrastiÅ†Å¡ says the Justice Ministry has information on the number of vaccinated pastors in all major religions (Catholics, Orthodox Christians, Lutherans, etc.). Statistical data shows that 85% of pastoralists are vaccinated against Covid-19 in Latvia. â€œThe minority is in the minority. For example, in the Evangelical Lutheran Church of Latvia, only 17 out of 130 pastors are not vaccinated. â€

â€œFirst of all, the archbishops and bishops are a good example. The first big story concerned the celebration in Aglona, â€‹â€‹when not only the Archbishop of the Catholic Church ZbigÅ†evs StankeviÄs, but also the entire college of bishops made the decision to limit the celebration in Aglona to only vaccinated residents. Later, the Catholic Church published an ad in which the Pope also urged people to get vaccinated. The Catholics were very organized and agreed to vaccinate, â€KrastiÅ†Å¡ said.

He also said that of all government partners, churches have proven to be the most obedient. “We have not seen a single case of mass infection within religious communities!”

The Justice Ministry adviser explains that the ministry is developing principles to prevent the state from interfering with churches. â€œThe ministry issues directives, and church leaders decide what conditions should be placed on people who have close contact with other people.â€

KrastiÅ†Å¡ points out that vaccination is progressing and that in a few months there will be very few people in Latvia who will not be vaccinated. â€œThe percentage in the communities can be even better compared to Latvia in general. It is because the members of the communities are more obedient and trust the Lord and what the Archbishop says on such matters. â€

“There are some exceptions [when people do not follow epidemiological safety rules]. However, generally the church is of the opinion that “we have to go through this difficult time.” Businesses and other organizations tend to take a different view. Some think that circumventing the restrictions is an achievement, â€said the ministry adviser.

As for the extreme cases of community members going out of their way to avoid following government guidelines, the ministry urges churches to reach out to such people and prevent people from hiding.

â€œIt is very important to let churches celebrate service. But everything must be organized in a safe environment and the pastors must lead by example. â€

â€œIf the government banned religious service, they would get very angry. Currently, however, the church leadership takes pride in following government rules and leading by example. â€

â€œEven though pastors think vaccination is torture, they still have to make peace with it, because they have to organize a service,â€ says KrastiÅ†Å¡.

He also admits that the government and its partners are not prepared to object to pastors maintaining their service when they have only undergone Covid-19 tests.

There is also a shortage of pastors. The same goes for teachers. However, teachers are not allowed to work if they only test negative – teachers must be vaccinated. But why? Is it fair to let one group go about their business without vaccination and deny another group the same?

The counselor of the Ministry of Justice explains that the word “righteous” is unusable here because the churches are in a way an exception to the rule, because they provide spiritual bread. It is not a place of entertainment, a cafe, a concert, etc., it is similar to one of the most basic needs of people – to eat, only in a spiritual sense.

The Germans neglect the Soviets, surprised by the defeat of Moscow | The Second World War

Rates drop for most loans