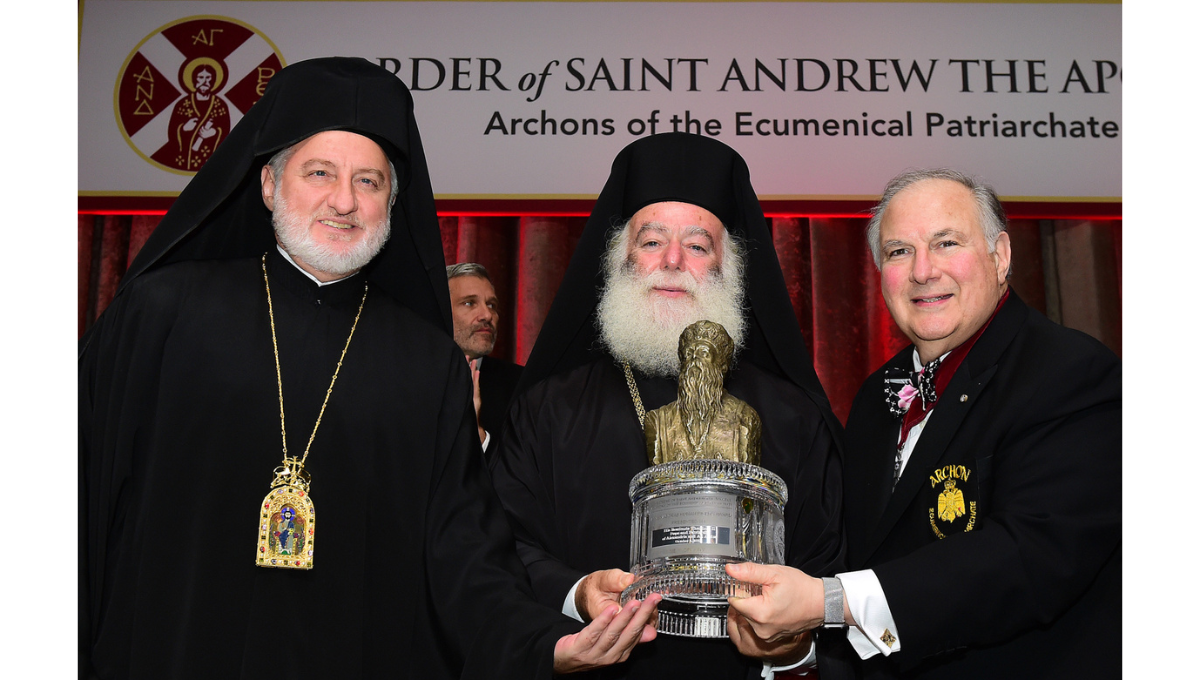 On Saturday evening, the Order of Saint Andrew, Archons of the Ecumenical Patriarchate, honored His Beatitude Theodoros II, Pope and Patriarch of Alexandria and All Africa, with the Athenagoras Human Rights Prize. The annual awards ceremony, which recognizes “an individual or organization who has consistently exemplified by action, purpose and dedication, concern for the fundamental rights and religious freedom of all people”, also coincided with the eighteenth anniversary of the enthronement of His Beatitude at the See of Saint Mark.

The missionary work of Patriarch Theodoros in the Patriarchate of Alexandria was widely considered visionary and, in support of the Patriarch’s ministries, the Archon’s National Commander, Dr. Anthony Limberakis, presented His Beatitude with a donation of 100,000 dollars, on behalf of the Order of St. Andrew, while Mr. John Catsimatidis, on behalf of the John and Margo Catsimatidis Foundation, also presented a matching gift.

As Dr. Limberakis explained in his remarks, Patriarch Theodoros also “constantly supported His All Holiness Ecumenical Patriarch Bartholomew in strengthening Orthodox unity” and “courageously was the first primate of the 14 autocephalous Churches to recognize autocephaly of the Orthodox Church”. of Ukraine and recognized that Ukraine’s 41 million peace-loving citizens deserve their own religious freedom.

Yet, according to Bishop Elpidophoros, who delivered the Encomium, we can trace the inspiration of His Beatitude for the defense of the Orthodox faith to the example set by his predecessors. Like Saint Athanasios the Great, the 20th Patriarch of Alexandria who endured persecution and exile in his defense of the Council of Nicaea, “Our Patriarch Theodore knows this same persecution, which has been relentless because of his position for the good canonical order of the Church – supporting the decision of the Ecumenical Patriarchate to grant autocephaly to the Orthodox Church of Ukraine, and thus, to return millions of Ukrainians to the canonical Church.

“I think it is safe to say that His Beatitude is an admirer of Slavic tradition; because he has a lot of experience from his time as Patriarchal Exarch in Odessa. He had warm relations with the Ukrainian and Russian Churches,” Archbishop Elpidophoros said. “But because of its righteous stance, the Moscow Patriarchate – which supports all-out aggression and violence against the Ukrainian people, as well as the illegal seizure of Ukrainian lands through sham elections at gunpoint – has invaded non-canonically the African continent, which is the complete ecclesiastical domain of the Most Holy Patriarchate of Alexandria”. In fact, in “direct response” to His Beatitude’s recognition of the autocephaly of Ukraine, the Moscow Patriarchate “adopted” 102 Patriarchate of Alexandria clergy from eight African countries and established a Patriarchal Exarchate of Moscow in Africa, Dr Limberakis said.

His All Holiness Ecumenical Patriarch Bartholomew gave a virtual acclamation in honor of His Beatitude before the official presentation of the award. In his acceptance, Patriarch Theodoros dedicated the award to “all who fight day and night for the assertion of all kinds of rights”.

“There are countless people who are wronged and oppressed in various ways,” he said. “A large number of these people live on the African continent, which is territorially and spiritually identified with our Ancient and Apostolic Patriarchate, of which I have had the care and direction for eighteen consecutive years with the grace of the Triune God and the help of my co-workers in the vineyard of the Lord. I think that award belongs to them too.

Identifying the examples of Nelson Mandela, whose “situations forced him to rebel, to endure, to cry out for his vindication”, and Archbishop Iakovos, whose march on Selma with the Reverend Dr. Martin Luther King “won a forever place in the heart of every anti-racist and progressive person of his time,” said Patriarch Theodoros: “I ask each of you to please do whatever you can and however you can. so that such situations are a thing of the past. My spiritual children in many cases do not have the right to be considered as people with value, gifts, rights but only as productive machines. Tolerance cannot and should not be seen by the civilized West as an acceptance and surrender, not even as a habit.The rights of the people – especially of the minorities – have been confirmed by the Lord himself with his preaching, with his associates tions, with his actions. The conciliation with the people of the “social fringe” during His space-time was not a fortuitous action, but it has its semiotics even today. It is the right of a creature to know its Creator.

His Beatitude expressed his gratitude to all who welcomed him during his visit. He also announced that he would then grant the title of “ταξιάρχης” of the Patriarchate of Alexandria to Archbishop Elpidophoros and Dr. Limberakis, and presented a gift to the Reverend Protopresbyter of the Ecumenical Throne Alex Karloutsos and Mr. John Catsimatidis.