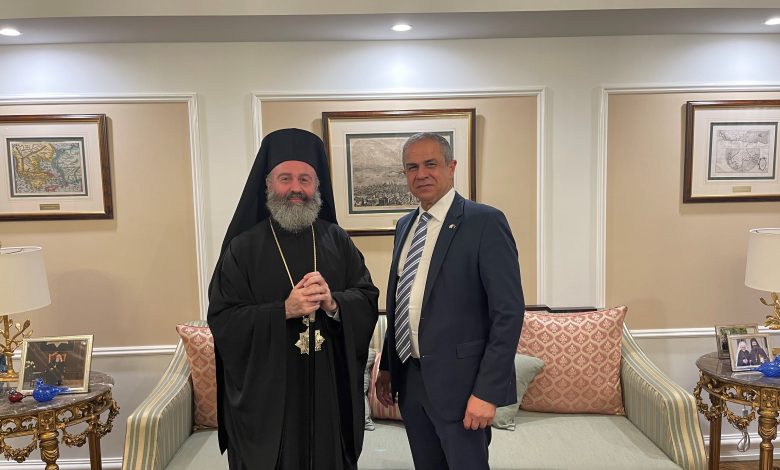 A meeting took place between Archbishop Makarios of Australia and Israel’s Ambassador to Australia, Amir Maimon, at the Archdiocesan Residence in Sydney.

The meeting, which lasted two hours, was warm and in a spirit of mutual respect and cooperation, the agenda for discussions between the two men included issues of common interest. The Israeli Ambassador, who was recently appointed to Canberra to take up his new post, also expressed a desire to meet the Archbishop to exchange views on current issues of concern to Australia and the global community at large, such as the war in Ukraine.

In addition, Bishop Makarios of Australia had the opportunity to mention the Ecumenical Patriarchate and the leading role of Patriarch Bartholomew at the head of the Orthodox Church, while he did not fail to mention the Patriarchate of Jerusalem , headquartered in Israel.

At the same time, Bishop Makarios described to the guest of honor the structure and functioning of the Archdiocese as well as the contribution of the Greek Diaspora to the fifth continent. The ambassador, for his part, underscored the historical ties that unite Greece and Israel and characteristically underlined that “in Australia, we all try to build bridges of unity and mutual support.”

The meeting ended with a dinner hosted by Bishop Makarios in honor of Mr. Amir Maimon. It should be noted that the meeting was also attended by Bishop Bartholomew of Charioupolis, Archbishop’s Vicar of Canberra, and the Chancellor of the Holy Archdiocese of Australia, Father Christophoros Krekelis, Archimandrite of the Ecumenical Throne.