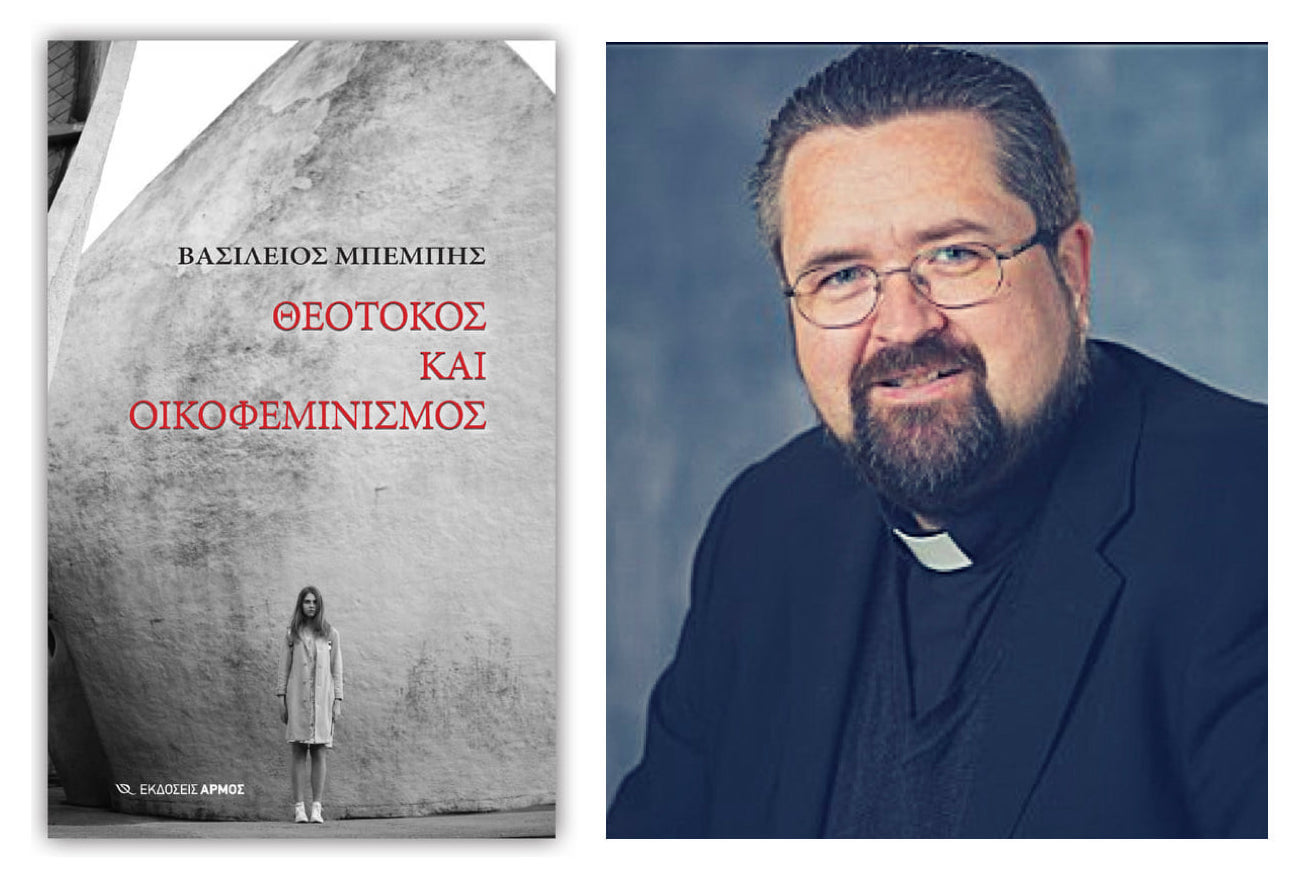 “It’s been years since anyone cared about the garden,” Vicky Flessas began, bringing Yannis Ritsos’ lucid verses to life.

“Nevertheless, this year – in May, in June – it bloomed again on its own, brightening everything up to the balustrades, a thousand roses, a thousand carnations, a thousand geraniums, a thousand sweet peas so that once again, the woman her old watering can came back, to water – beautiful again, serene, with unseen devotion.

It is this lyrical, albeit bygone, perception of ecofeminism that inspired Rev. Dr. Vassilios Bebis, The Mother of God and ecofeminism. Entering the verdant garden of his muse, Reverend Dr. Bebis encounters the maiden of Gallilee in the serenity of a devoted woman returning to the garden. And the threadbare but stable watering can that Ritsos puts within reach murmurs the undecorated life of a provincial woman, whose artisanal presence effects the renewal – and the embrace – of all creation.

“And the garden enveloped her to the shoulders, it embraced her, it won her over, it lifted her up in its hands.

An unusual and provocative word, ecofeminism is a methodological category. This means that it is a tool for asking questions from a particular point of view and generating ideas in response to those questions. Evident in the word itself, it combines two distinct viewpoints, drawing connections between femininity and the natural world, emphasizing the historical vulnerability and domination of women and the environment. Looking at the intersection of these currents, ecofeminist thought aims at the restoration and empowerment of disenfranchised people.

“The concept was introduced to me when I was just a graduate student at Boston University,” the dad said. Bebis told the Orthodox Observer. Inspired by the ecological vision and life work of the Ecumenical (and Green) Patriarch, Bartholomew, and under the guidance of his mentors and colleagues, such as Dr. Chrysostomos Stamoulis, Dean of the Faculty of Theology at the Aristotle University of Thessaloniki, the father. Vassilios brings the Orthodox tradition, in particular a central figure in its theology – the Theotokos, into conversation with ecofeminist ideas, generating new perspectives firmly rooted in Orthodox consciousness and ethos. He does this not simply to contextualize and further illuminate how Orthodox Christians think of the Theotokos and express their devotion to her, but also to bring the person of the Mother of God into dialogue with the contemporary moment – beyond the limits of Orthodox Christian theology. and church circles.

“Bold” is how Archbishop Elpidophoros of America described the project, reiterating it many times while congratulating Fr. Vassilios for his intrepid work. The Archbishop was quick to point out that “such a subject is not liked in the narrow theological and ecclesial circles of Orthodoxy”, and added “that the mere mention of feminism in such forums evokes a some discomfort and some reaction”. Nevertheless, the Archbishop praised the author for producing a comparative study that is not only faithful to the Orthodox tradition, but executes it in a creative and beautiful way.

“Dialogue has no borders. Salvation is for everyone. We do not refuse dialogue with anyone for any reason,” His Eminence said emphasizing the multivalent significance of the Father. Bebis’s book, which he considers a contribution to ecumenical and interreligious dialogue, in addition to the theological corpus of the Orthodox Tradition.

As a chaplain at Harvard University, where he is charged with supporting a richly diverse community and nurturing the exploration of deeply held beliefs, Fr. Bebis must facilitate honest and respectful conversation around questions of ultimate meaning, of purpose and value. As a result, he is no stranger to dialogue. It discusses big issues that have contemporary intrigue with students and faculty on and off Harvard Yard. Many are Orthodox Christians, some belong to other religious traditions, and there are even those who espouse no faith.

Engagements with unusual or contemporary themes—such as ecofeminism—usually occur outside the boundaries of the Orthodox community. For His Eminence, this is significant because such commitments allow Orthodox Christians to come out of their esoteric bubble and touch their neighbors, “to look into the eyes of the other, to receive the other, to consent to talk with the he other, to dare to come out of oneself, is the authentic Christian tradition and theology. Christ went out into the world and talked with the world. Christ did not stay in the synagogues and spoke only with men, with clerics, with ‘non-sinners’,” His Eminence said, concluding that, “with this outgoing disposition, the P Vassilios, faithfully and eruditely, authentically expresses the Orthodox Tradition in a spirit of dialogue with all religions and ideas, without barriers or frontiers.

The book was discussed in depth during a panel on April 4, 2022, organized by publishing house Armos (Greece) and moderated by journalist Vicky Flessa. Two additional panelists, Dr. Chrysostomos Stamoulis and Dr. Stelios Tsobanidis, joined Archbishop Elpidophoros of America and Reverend Dr. Vassilios Bebis. A full recording of the event and purchase links for the book are both available online. The next English edition will be available in 2023.