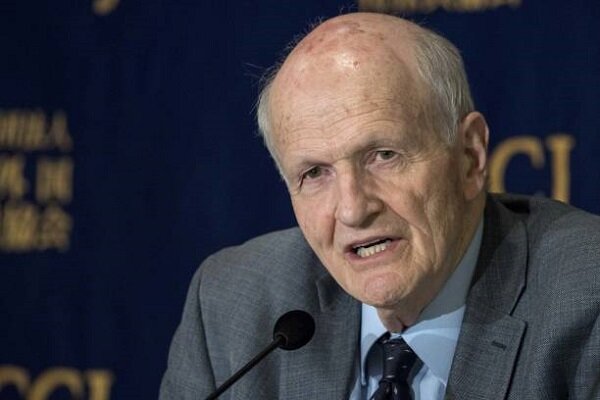 All nuclear weapons are dangerous, regardless of whether they are held by Russia or the United States: nuclear physicist

TEHRAN — Expressing concern over the expanding war in Ukraine, a nuclear physicist says all nuclear weapons are dangerous to world peace.

“All nuclear weapons are dangerous, no matter who owns them. They will destroy us if we don’t eliminate them,” Frank Von Hippel told the Tehran Times.

Many political observers worry about the expansion of the war in Ukraine because it may push the nuclear powers, especially Russia and the United States, into direct confrontation.

“The United States and the Soviet Union/Russia almost launched nuclear attacks when their early warning systems provided false information that the other country had launched nuclear missiles against them. Both countries have been run by sociopaths empowered to launch nuclear weapons — most recently Donald Trump and Vladimir Putin,” notes Hippel, who is also professor emeritus of public and international affairs in Princeton’s Science and Global Security Program. .

“The world is in a period of transition away from powerful countries claiming the right to control less powerful countries in their ‘backyard’.” The risk of a possible nuclear attack or the use of biological weapons highlights questions about the failure of attempts to reduce weapons of mass destruction.
Here is the text of Frank von Hippel’s interview:

Q: How do you rate US and Russian nuclear power relative to each other?

A: Each has enough destructive power to destroy civilization even after taking a first strike. Reagan and Gorbachev were right when they said that “a nuclear war cannot be won and should never be fought”.

Q: Is it correct to say that Russia’s nuclear weapons are dangerous to the world, but those of the United States or Britain are safe?

A: All nuclear weapons are dangerous regardless of who owns them. They will destroy us if we don’t eliminate them. The United States and the Soviet Union/Russia nearly launched nuclear attacks when their early warning systems provided false information that the other country had launched nuclear missiles against them. Both countries have been ruled by sociopaths with the power to launch nuclear weapons – most recently Donald Trump and Vladimir Putin. Britain has far fewer nuclear weapons and they are not in a launch-on-war posture, but they could destroy over a hundred major cities.

Q: After the collapse of the Soviet Union, NATO pledged not to expand into Russia. Don’t you think Western powers are threatening Russia’s hegemony in its backyard?

A: Let’s hope the world is in a period of transition away from powerful countries claiming the right to control less powerful countries in their “backyard”. The United States has had this attitude towards the entire western hemisphere, and we still see this attitude in the American sanctions against Cuba. Russia has historically earned its paranoia by enduring numerous invasions, beginning with the Mongols in the 1200s and most recently by the Germans in the 1940s. Russian leaders like Putin have therefore been obsessed with controlling the “foreign”. close to Russia. But, in this case, Putin created the threat he feared. Ukraine refused its dominance and began to establish a democracy oriented towards Europe rather than Russia. Putin saw this as a threat. His less paranoid predecessors, Gorbachev and Yeltsin, did not.
Regarding NATO enlargement, I have mixed feelings. Historically, NATO was established as a defense alliance against the Soviet Union which, unlike the Western European United States, refused to relinquish its control over the Eastern European countries it had invaded at the end of the Second World War, including half of Germany. . (Recall that the United States had to pressure the Soviet Union to leave northern Iran after World War II.) NATO’s expansion into Eastern Europe after Gorbachev refused to continue to control Eastern Europe by force was a response to these newly liberated Eastern European countries. fearing that someone like Putin will come to power in Russia and try to subjugate them again. Whether NATO expansion helped create the paranoia in Russia that helped Putin to power is worth debating.

Q: Antonio Guterres said the Security Council failed to prevent or end the war in Ukraine. Do you think we are reaching a stage in which world powers cannot understand each other’s language?

A: Unfortunately, it seems that Putin did not heed Guterres’ call to create humanitarian corridors through which civilians trapped in Mariupol could escape. I think Putin tricked himself and all of us too. To stay in power in Russia, he must win in Ukraine. A strong leader becomes vulnerable if he is defeated in war. We saw it with the collapse of Argentina’s military dictatorship after it lost its war with Britain over the Falklands.

Q: Do you expect a third world war or an extension of the war in Ukraine?

A: I am very concerned about what Putin might do if he fails to retain at least increased territory in Ukraine and fear that he will be seen as a “loser” by another ambitious Russian strongman who wants to take his place. . At the same time, we must support the UN charter, which prohibits “acts of aggression” if we don’t want to return to a world of dog-eating dogs. This places us in a dangerous situation. Is Putin ready to destroy the world rather than lose power?