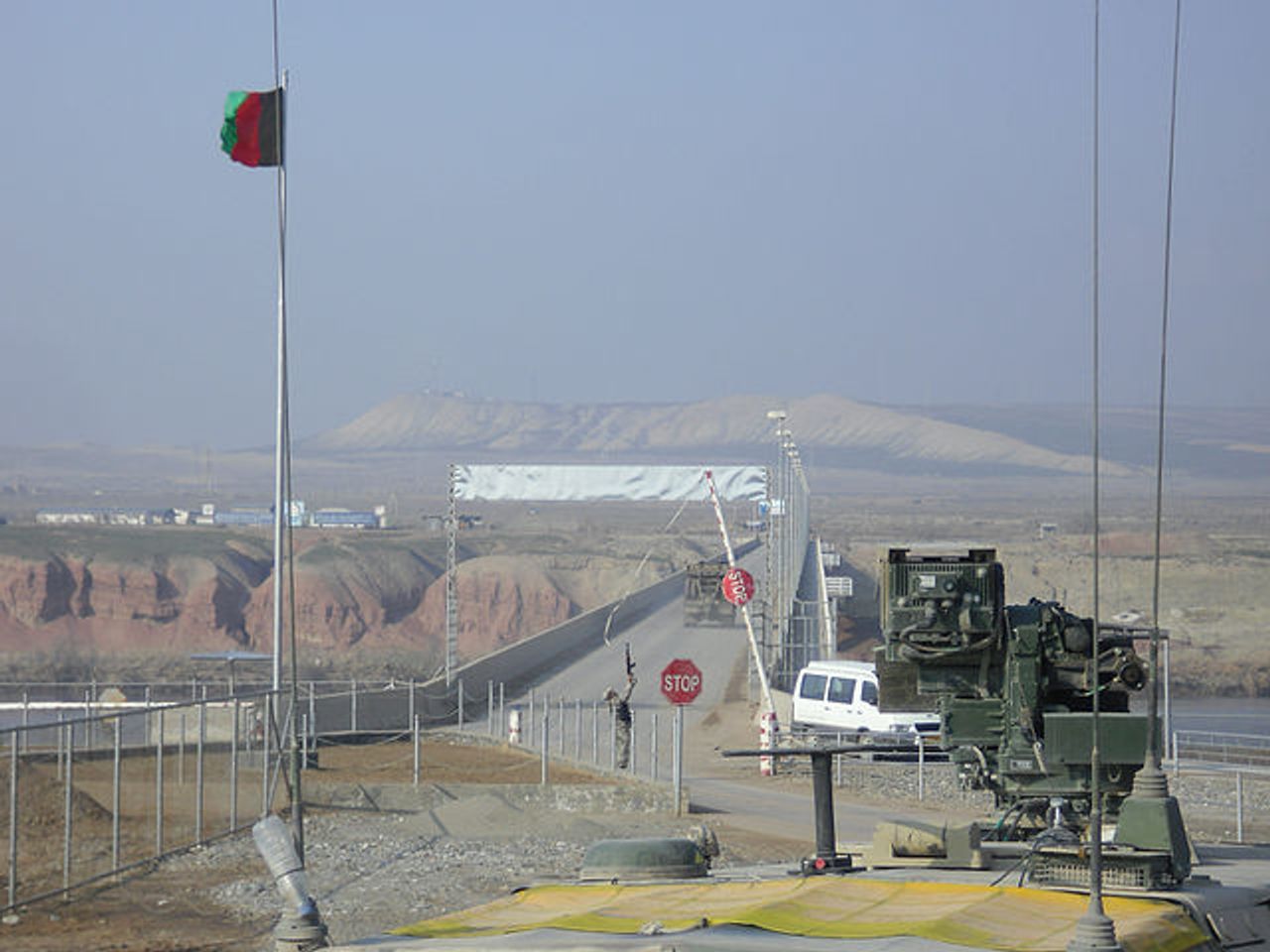 As the United States completes the withdrawal of its troops from Afghanistan after two decades of a bloody and criminal war, numerous reports indicate that the ongoing conflict has already started to spread to neighboring Tajikistan. Last Monday, 1,500 Afghan soldiers crossed the border into Tajikistan, an impoverished former Soviet republic, to escape the advancing Taliban. Tajikistan has a border with Afghanistan that stretches 1,357 kilometers, or 804 miles.

According to the BBC, the soldiers, who were later flown back to Kabul, were in desperate need of food and water. A thousand additional civilians are also said to have fled to Tajikistan. Political commentators warn that thousands more refugees could seek refuge in Tajikistan and other neighboring countries in the weeks and months to come, as all that remains of the social infrastructure in Afghanistan experiences a catastrophic collapse. A commentator in Foreign police warned that millions of people in Afghanistan could face famine over the next 12 months and that the country could become “the next Yemen in the world.”

Tajikistan itself has been devastated by the impact of capitalist restoration and is the most impoverished of all the former Soviet republics. Almost half of the population does not have access to clean running water and a third of the country’s GDP comes from remittances sent by Tajiks working in appalling conditions as migrants in Russia. The country is very unstable politically and has recently been embroiled in a bloody border conflict with Kyrgyzstan which has left more than 50 dead.

Since last week, the Taliban have made further strides in Afghanistan and now claim to control 85% of the country’s territory. The Tajik government has ordered the mobilization of 20,000 military reservists and requested Russian assistance in guarding the country’s borders. However, a Eurasianet report indicates that the border is already de facto under Taliban control.

The newspaper quoted Anatoly Sidorov, the chairman of the Joint Chiefs of Staff of the Moscow-led Collective Security Treaty Organization, as saying on July 8: â€œThey [the Taliban] have set up observation posts, checkpoints and security posts [along the entire border]. Everything is marked with white flags, there is everything there in sight, including weapons. They are not hiding anything. The Afghan government and the Tajik government declined to respond to requests for comment on the Eurasianet situation.

The spill-over of the military conflict from Afghanistan to Tajikistan, home to a Russian military base with 7,000 troops, has raised huge concerns in the Kremlin. Russian Foreign Minister Sergei Lavrov said last Wednesday: â€œWe are closely following what is happening in Afghanistan, where the situation tends to deteriorate rapidly, including in the context of the precipitous departure of US troops and other troops from NATO. He also clarified that, if necessary, Russia would use its troops stationed in Tajikistan to secure the country’s border. However, Russian press commentators assume that the Kremlin would only act in the event of an overt military attack from Afghanistan.

After three decades of wars led by the United States, the outbreak of a third world war, which would be fought with nuclear weapons, is an imminent and concrete danger.

The extension of the conflict to neighboring countries and the emerging humanitarian catastrophe underscore that the withdrawal of US troops, after three decades of endless wars in the Middle East, is far from ending the crimes of imperialism in the region. Rather, it serves as a catalyst for an escalation of geopolitical, ethnic and religious conflicts that have been fueled for decades.

From its inception, the war in Afghanistan was part of the efforts of US imperialism to bring the entire central region of Europe and Asia (called “Eurasia” by geostrategists), particularly the Middle East and the ‘Central Asia, under its full control in the process. of the Stalinist dissolution of the Soviet Union in 1991. While invading Iraq and Afghanistan in the Middle East and Central Asia, the United States systematically surrounded Russia on its western borders, attracting many countries from the former Soviet bloc in NATO and staging coups in the Black Sea Region of Georgia in 2003 and more recently in Ukraine in 2014.

In Central Asia, the United States orchestrated a coup d’Ã©tat in Kyrgyzstan in 2005. Resulting from the restoration of capitalism by the Stalinist bureaucracy and deeply dependent on imperialism, the Russian oligarchy was unable to respond to these interventions. and ongoing aggressions apart from a combination of appealing to imperialist powers and promoting nationalism and militarism, which have only further fueled military and ethnic tensions, including within its own borders .

Today, the Kremlin fears that the change in US foreign policy and the rapid rise of the Taliban will further destabilize the entire region and reinforce Islamist tendencies in Central Asia and Russia itself.

From 1994 to 2009, the Kremlin waged two bloody wars against the separatist and Islamist tendencies of the North Caucasian Republic of Chechnya, which sought to separate from the Russian Federation. These forces were encouraged by US imperialism, especially in the 1990s, with the aim of promoting the break-up of Russia along ethnic lines.

Since then, Islamist forces in the North Caucasus, particularly the Emirate of the Caucasus, are known to have developed close ties with the Taliban, al-Qaeda and ISIS, all of whom have been able to recruit significant numbers of fighters in Chechnya.

In 2014, an active-duty US special operations officer told ABC News that “a good percentage of the overall enemy population” at the start of the war in Afghanistan were “Chechens.” Radical Islamists in Chechnya are also known to have joined various US-backed militias that fought against the Assad government in the civil war in Syria.

Moreover, the Kremlin is well aware that the withdrawal of American troops, far from marking the end of American imperialist aggression, is part of a broader reorientation of American imperialism towards the preparations for a conflict between the great powers. , primarily targeting China, but also Russia. Especially over the past decade, China has developed extremely close economic ties with countries in Central Asia, most notably Kazakhstan, Uzbekistan and Kyrgyzstan, often exceeding the previously dominant influence of Russia.

Having already been drawn into the maelstrom of imperialist encirclement of Russia, geopolitical tensions in the region will now be further fueled by the United States’ open preparations for war against China. Russia and China also have competing interests in Central Asia that are often barely reconciled, based on the common goal of limiting American influence.

In this context, the Kremlin has been particularly alarmed by reports that the United States is considering opening a new military base in a former Soviet republic to maintain troops stationed in Central Asia. In May, the the Wall Street newspaper reported, citing unnamed sources in the US government and military leaders, that “US military commanders want bases for troops, drones, bombers and artillery to strengthen the Afghan government, control the Taliban insurgency and monitor other extremists. The options being assessed range from neighboring countries to the more distant Gulf Arab Emirates and Navy ships at sea. “According to the newspaper, the United States is eyeing” Uzbekistan and Tajikistan, which border Afghanistan and would allow fast “.

The Russian Nezavisimaya Gazeta commented at the time that the reports “appeared to have seriously alarmed the Russian leadership” and that “the Kremlin clearly viewed the reports on the matter as a preliminary political investigation”. Following information from the American press, Russian Defense Minister Sergei Shoigu visited Dushanbe and Tashkent, and Tajik President Emomali Rakhmon was invited to Moscow for a state visit.

In the American ruling class, a new military base is still debated. The War on the Rocks military policy blog recently published an article strongly opposing a new military base in Central Asia. The think tank journal Foreign police posted a comment by Phil Caruso, member of the American Council on Foreign Relations, warning that the United States would not be able to defend its interests in the region after the withdrawal “without bases nearby”.

What the WSWS wrote about the war in Afghanistan in 2001

From the start, the WSWS exposed the lies of the Bush administration that its illegal invasion was an act of self-defense in response to the September 11 terrorist attacks.

A Taste of Greece at St. John the Divine | News, Sports, Jobs