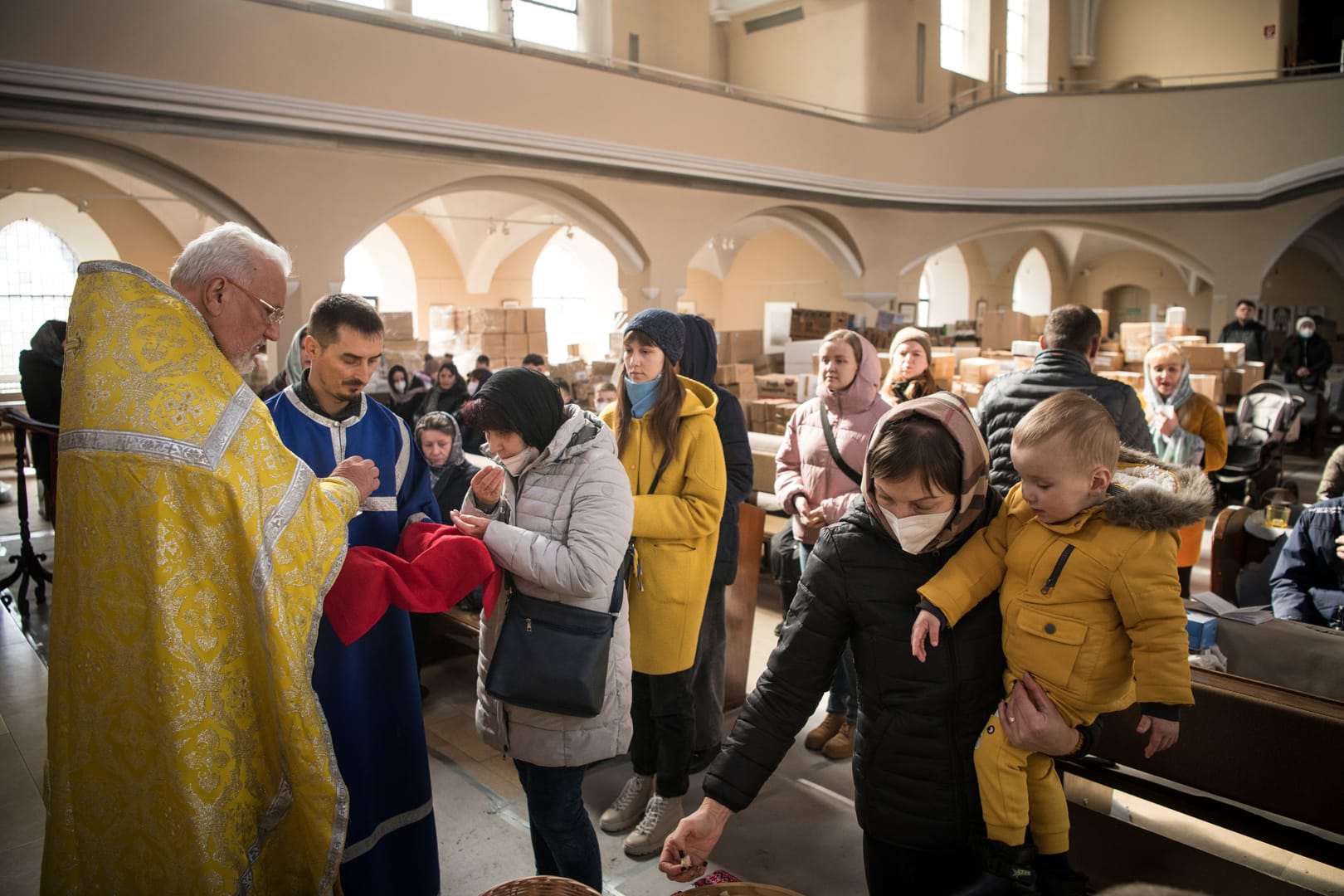 BERLIN — Alona Fartukhova has been visiting the Ukrainian Orthodox Christian community in Berlin every day since arriving in Germany five days ago from war-torn kyiv. The 20-year-old refugee attended daily prayers for peace and helped organize donations for her compatriots back home.

On Sunday, Fartukhova joined dozens of other Ukrainian worshipers at a red-brick church in the German capital who sang together, lit candles and received blessings from community leader Father Oleh Polianko. Later, they put medical crutches, sleeping bags, diapers, large boxes of gummy bears and countless jars of pickles – which were piling up all over the inside of the church – in large cardboard boxes to send to Ukraine.

“It’s a help for our army, and it’s… a lot for the children,” said the university student, who fled alone and now lives in a hotel in Berlin, as she piled boxes on the pews of the church. “It’s so good that a lot of people are supporting us, we really appreciate it.”

Across Europe, Ukrainians gathered for church services on Sunday to pray for peace in their war-torn country. Newly arrived refugees mingled with longtime members of the 1.5 million strong European Ukrainian diaspora in places of worship across the continent, from Germany to Romania to Moldova.

Most have fled to neighboring Poland, Romania or Moldova, but as the war continues many are moving further west.

Germany has registered over 200,000 Ukrainian refugees, but the actual numbers are expected to be much higher as Ukrainians do not need visas to come to Germany and the federal police only register refugees entering Germany by train or by bus. Ukrainians coming to Germany from Poland by car are normally not registered.

Members of Germany’s Ukrainian immigrant community, numbering around 300,000 people, not only raised funds and collected donations, but also transported goods across the border and beyond and, on the way to back to Germany, took refugees. Families already living in Germany have come together to welcome refugees and help them find jobs and send their children to school.

Religious communities of Ukrainians in the diaspora – mainly Orthodox Christians, but also some Catholic and Jewish communities – have spearheaded initiatives for refugees and have also become an anchor for those worried about their families during the war. .

Because the Berlin community has been so overwhelmed with donations, they have temporarily moved from their small church in the Hermsdorf district of the city to the larger Lutheran Community Church Philippus Nathanael in Berlin-Friedenau. Here they have plenty of space to hold donation drives and a wide driveway for trucks picking up the boxes, says Andriy Ilin, the community’s deputy leader.

The Lutherans are currently holding their own services at a nearby community center.

“Initially they offered us the church for March, now they’ve extended it to April, and they kindly let us know that if we needed it beyond that, they would allow it too.” Ilin said.

Elsewhere in Europe, local worshipers have also opened their churches to welcome Ukrainians.

In Chisinau, the capital of Moldova, residents and refugees gathered for an Orthodox prayer service on Sunday.

Angelica Gretsai, a refugee from the northern Ukrainian city of Kharkiv, lit candles just before the start of the Russian-language church service at a small church in Sfintul Gheorghe.

“(I pray) for peace of course, for peace in Ukraine, for these two peoples (Russians and Ukrainians) to reconcile, for this war to be no more,” Gretsai said, adding that she was looking forward to go home and be with friends and family.

“I’m basically alone here, this is my first time to Moldova,” she said, adding that she was staying with distant relatives she had never met before. Moldova has taken in more than 360,000 refugees since Russia invaded Ukraine.

In Suceava, Romania, south of the Ukrainian border, locals and newcomers from Ukraine held a service together at St. John’s Church. Romania has taken in more than half a million Ukrainian refugees since the start of the war and many of them have come to church service.

Ariadna Belciug, a local resident of the service, said she was praying “especially for the children, because no one deserves to go through these times”.

Nicolae Dumitrache in Chisinau, Moldova and Eldar Emric in Suceava, Romania contributed to the report.

Fear of provoking Putin is driving the Western world to disaster

War Diary of a Ukrainian Jesuit