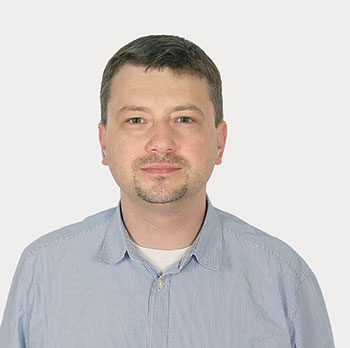 OTTAWA – The creation of the Ukrainian Orthodox Church (OCU) could help pave the way for the Holy See’s recognition of a Ukrainian Catholic patriarchate, according to a Ukrainian Church historian.

â€œThe main problem with the recognition of patriarchal status was that Moscow would be upset about it,â€ said Anatolii Babynskyi, researcher at the Metropolitan Andrey Sheptytsky Institute of Eastern Christian Studies in Toronto, in an interview with The Ukrainian Weekly.

However, in light of Ecumenical Patriarch Bartholomew’s official granting of ecclesiastical independence to the OCU in early January, â€œthe Vatican can tell Moscow today that we can have an ecumenical dialogue on the Orthodox Moscow Patriarchate. . And as far as Ukraine is concerned, we will speak with the Ukrainian Orthodox and Catholic Churches and not with you, â€explained Mr. Babynskyi, 39, from Ternopil, Ukraine, who is completing his doctorate. thesis at the Ukrainian Catholic University of Lviv on the theme of the patriarchal movement within the Ukrainian Greek-Catholic Church following the Second Vatican Council.

The Ukrainian Greek Catholic Church (UGCC) also has a Primate – Sviatoslav Shevchuk, the Metropolitan of Kiev-Halych, who is officially the main Archbishop of the Church but who is also recognized by the clergy and the faithful as a Patriarch – a title first applied to the late Cardinal Josyf Slipyj.

Mr Babynskyi, the former editor of the Lviv-based Patriarchate magazine, said the Vatican’s recognition of a UGCC Patriarchate would be more likely if the OCU expressed no objection.

â€œThe primates of the Greek-Catholic and Ukrainian Orthodox Churches have already met, and Patriarch Sviatoslav said that they have decided to prepare a roadmap for the two Churches on how to establish better relationsâ€, a- he noted.

But creating an official UGCC patriarchate could take years, said Babynskyi, who spoke about the consequences of UCO autocephaly on Jan. 29 at the Ukrainian Catholic Shrine of St. John the Baptist in Ottawa. .

The UCO is still in the process of organizing itself, and Mr Babynskyi, former editor-in-chief of the Religious Information Service of Ukraine, estimated that it could be five years before there is a United Orthodox Church in Ukraine.

The biggest obstacle remains the bishops of the UOC-MP, who do not want to join the new Church.

â€œThere are three parallel hierarchies in the [OCU], and the process of consolidating into one legal body is underway, â€Babynskyi said. The Ukrainian Orthodox Church – Kyiv Patriarchate and the Ukrainian Autocephalous Orthodox Church which separated from the Moscow Patriarchate when Ukraine gained independence in 1991 still exist and have their own bishops who will have to be integrated into the new OCU .

In terms of the number of parishes, the UOC-MP remains the largest Orthodox church in Ukraine, with between 11,000 and 12,000 churches, Babynskyi said. He noted that the new OCU has about 7,000 parishes.

He expects the merger of UOC-KP and UAOC into OCU to take at least a year.

â€œWe don’t have many examples of three Orthodox Churches in an Eastern European country. It’s a unique situation, â€he said. “When other churches got autocephaly, they usually only had one church in a country.”

The Ukrainian Orthodox Church is the 15th Autocephalous Church in a worldwide community of 300 million Orthodox believers.

However, the new Church has not yet been recognized by the other 13 Autocephalous Churches, including the Patriarchates of Alexandria, Antioch, Jerusalem, Bulgaria and Moscow, and the Orthodox Churches of Greece, Poland, Czech lands and Slovakia.

In January, former Ambassador to Ukraine John Herbst wrote on the Atlantic Council blog that the Tomos declares that the new Ukrainian Church has jurisdiction only in Ukraine. â€œThis means that Ukrainian Orthodox parishes outside of Ukraine will be under the Ecumenical Patriarchate,â€ he wrote.

â€œIt is a beautiful gift for Constantinople and a reminder to everyone of the meaning of the adjective ‘Byzantine’. The insistence that parishes outside of Ukraine should report to the Ecumenical Patriarch will not be welcomed by Ukrainian believers, and many of these parishes may not attend. These complications remind us that the Tomos is one more step – essential certainly, but just one step – in the emergence of a united and independent Ukrainian Church â€, underlined Ambassador Herbst.

But Mr. Babynskyi believes that the unification of the Orthodox Church in Ukraine is important from a nationalist point of view, where the country takes a greater distance from Russia, both religiously and practically to meet the demands. needs of the Orthodox adherents of Ukraine, who make up about 65 percent of the country’s population of 48 million people.

â€œThe main problem has been pastoral,â€ he explained. “Ten or fifteen million Ukrainians did not have the fellowship of other Orthodox in different countries before [the OCU] obtained the canonical status of Constantinople. Yet Moscow still denies the use of the name “Christian” for Ukrainian Orthodox who are not members of the Moscow Patriarchate.

One of the most heartbreaking and widely reported consequences of this religious division occurred early last year when a priest in the Moscow-led Church refused to bury a baby crushed by a man who was allegedly drunk and committed suicide by jumping from an eighth floor. apartment in the central Ukrainian city of Zaporizhia.

The Orthodox funeral rite was refused because the baby was baptized in the Church of the Kyiv Patriarchate. â€œThe priest said our baby was not baptized and our Church was a sham,â€ Roman Polishchuk, the baby’s father, told Ukrainian news site ForPost.

Mr Babynskyi said that although this is the “most horrific” example of Ukrainian anti-Orthodox discrimination, there have been “thousands” of other cases where members of the UOC- KP and UAOC were not seen by the UOC-MP as true Christians.

“But the Moscow Patriarchate has had 30 years to solve the problem and has done nothing,” he said.

The Russian Orthodox Church, which rejected the canonical status conferred on the OCU when Metropolitan Epifaniy received the Tomos from Patriarch Bartholomew in an elaborate ceremony on January 6 at St. George’s Cathedral in Istanbul, broke its links with the Ecumenical Patriarchate.

Ukraine’s offer for autocephaly for its Orthodox Church began during the Ukrainian National Revolution when a separate Church was established in 1921 without canonical recognition, according to Mr. Babynskyi. â€œThe struggle lasted for almost 100 years, and today these people have an autocephalous Church. “

â€œThey always said that this ‘big’ Russian Church started in Kiev and then moved to Moscow,â€ Babynskyi said. “So when this new Ukrainian Church is independent from Russia, it’s like losing part of its history.”

(The metropolis of Kiev and all of Russia was under the ecclesiastical jurisdiction of the Ecumenical Patriarchate of Constantinople. It dates back to 988, when Volodymyr the Great, the grand prince of Kiev, declared Christianity the state religion of Russia in Kiev .)

In view of the growing tensions between Kiev and Moscow concerning the hostilities supported by Russia in the Ukrainian Donbass region, the emergence of the OCU also has a political dimension.

â€œFor many Ukrainians – Orthodox, Catholics, non-believers and even Muslims – this is seen as helping to protect national security,â€ Babynskyi said. â€œThe Moscow Patriarchate was like a channel of Russian influence over Ukraine. It is well known that relations between the Patriarch of Moscow [Kirill] and the president of Russia [Vladimir Putin] are very close and Ukraine’s place in their worldview is essentially the same.

To ensure that the separation from Russia is clear, the Ukrainian Parliament passed a law on December 20, 2018, which obliges churches whose â€œhead office or administrationâ€ is located in an â€œaggressor stateâ€ to re-register under a new name within four months. . This will likely mean that the Church of the Moscow Patriarchate in Ukraine will be known as the Russian Orthodox Church in Ukraine, as UOC-KP Primate Patriarch Filaret said last October in an exclusive interview. with Radio Free Europe / Radio Liberty.

Mr Babynskyi said he expects the OCU to be used by Ukrainian President Petro Poroshenko and others in the current campaign leading up to the March 31 presidential election to exemplify a tangible example of sovereignty Ukrainian.

The â€œdangerâ€, as Mr. Babynskyi pointed out, is that politicians might wish to make the OCU a state church and most of the bishops in the new entity might agree with such a view. â€œBishops want state support, and politicians want church support at election time,â€ he said. “So they use each other.”

However, speaking at the enthronement of Metropolitan Epifaniy on February 3, President Poroshenko said that the OCU â€œis and will be separate from the stateâ€. The UNIAN news service quoted him as stressing: â€œThere will be no state-controlled church in Ukraine. This constitutional principle was in effect and will remain so.

The body exists, and I am one: the mystagogy of the time of the Nativity