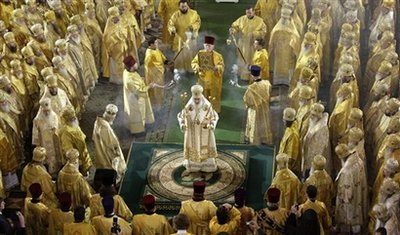 By Christian nationalism, I refer to a belief that the values, culture, and laws of a particular nation should respect or reflect biblical ethics and morality. Here are four popular historical viewpoints that I have observed related to this topic.

The first view is one where church and state are completely integrated such that the opinions and identity of a church coincide with the values ​​and identity of a particular nation and culture. The Eastern Orthodox Church is a prime example. Their churches are so intertwined with culture and nation that they are named after their country, for example, Greek, Russian, Ukrainian and Polish Orthodox.

If there is a civil war or if a segment of a nation experiences a geo/political split, the Orthodox Church within that nation will also experience an ecclesial split based on its political alliances. Currently, we are witnessing an ecclesial division between Ukrainian and Russian Orthodox leaders. They each bless their nation’s respective armies during the current Russian invasion of Ukraine. It is a very unbiblical form of Christian nationalism since the Gospel should never be subject to the dictates and politics of any nation.

Since the early centuries of Christianity, church and state have intermingled at certain times. During the Protestant Reformation, a person was considered either a Roman Catholic or a Protestant depending on the nation in which they were born. For example, “The Peace of Westphalia” in the 17th century ended the “30 Years’ War” by allowing certain lands to be designated as Roman Catholic or Protestant.

Even today we have people born in Germany or Norway who identify as Lutheran, or if they were born in England they tend to identify as Anglican. This is unbiblical since God has no grandchildren; each person must be born from above, not of flesh and blood or by the will of men (John 1:12-13). Nearly 80 years ago, the world witnessed a horrifying example of Christian cultural nationalism when Hitler equated an Arian German with a historic Christian Lutheran. He even used some of Martin Luther’s later quotes to stir up feelings against the Jewish people and support his notion of the so-called Reich Church. Therefore, it is not because you were born in a certain nation that you are a citizen of Heaven. The Gospel of the Kingdom transcends all geo/political identities because, as King of kings, Jesus claims all nations for Himself (Psalm 2).

In recent days, some of the so-called prophets and their followers seemed to link the Kingdom of God to America’s political destiny, with some even claiming that Donald Trump has been crowned as the only recognized American president in heaven. Linking a political party, person or secular movement to the Kingdom is not biblical. The Kingdom transcends all nations and systems and never depends on top-down political control to pursue God’s will.

This form of Christian nationalism occurs through the permeation of the gospel, not through top-down political coercion. The true permeation of the Gospel in society ends up influencing a nation with Judeo/Christian principles. After all, Jesus called his disciples “the salt of the earth and the light of the world”, not the salt of the church and the light of the pew (Matthew 5:13-16). This is an express statement by Jesus that He expects believers to be prophets to the world.

The Lord’s Prayer goes further as it involves praying for the Kingdom of God and His will to be done on earth (not just in church buildings for two hours on Sunday mornings) as it is in Heaven. (Luke 11:2-4). So, since God claims the earth for himself, there is no neutrality in this world. A nation bases its laws and policies on biblical ethos or self-reliant humanism.

Therefore, all followers of Christ should work for biblical justice in their civic government and model Kingdom values ​​in their particular sphere of influence. If every church would make disciples and release them to serve in the workplace, their nation would see bottom-up transformation through changed hearts and minds.

In terms of “salt and light” Christian nationalism, we are responsible to love our neighbor as we love ourselves as individual believers. We can’t take care of others if we don’t take care of ourselves. The apostle Paul also commands Christians to manage their homes and care for their family members (1 Timothy 3:5; 1 Timothy 5:8).

The order to care for your own family first can be logically expanded to include providing for your nation first since a nation supports the ecosystem necessary for healthy biological families. Ergo, a responsible Christian should prioritize reaching out to his nation and supporting policies that improve the quality of life in his own country if he truly loves his immediate family and community. For example, if you are a believer living in the United States, you can advocate for an “America First” mindset, as long as it does not involve the abuse of other nations. .

In conclusion, Christian nationalism is biblical if it is based on influencing one’s nation through bottom-up community service, advanced problem-solving, and an immersion in the gospel that then results to the exaltation of Christ in all spheres of society.

Dr. Joseph Mattera is an internationally renowned author, consultant, and theologian whose mission is to influence leaders who influence culture. He is the founding pastor of Resurrection Church and leads several organizations, including the US Coalition of Apostolic Leaders and the Christ Covenant Coalition.